PRM & GLV’s Offshore Drilling has Begun. Here’s what we’re Watching for Next

Disclosure: S3 Consortium Pty Ltd (the Company) and Associated Entities own 7,000,000 GLV shares, 49,000,000 PRM shares and 11,833,332 PRM options at the time of publishing this article. The Company has been engaged by PRM and GLV to share our commentary on the progress of our Investment in PRM and GLV over time.

Drilling has begun at Sasanof-1 exploration well on the North West Shelf of WA. 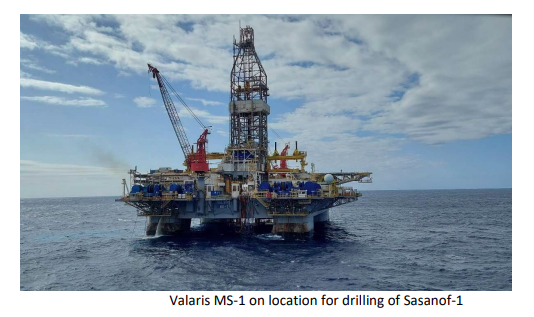 This well has been ranked amongst the Top 20 Highest Impact Wells happening anywhere on the planet in 2022... and it's happening right now. 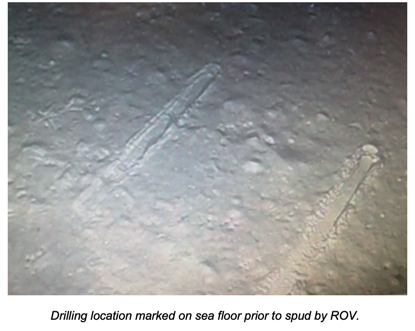 The primary target reservoir stretches down 500m - between a total depth of 2,000m and 2,500m below sea level.

The drill rig is expected to hit this primary target reservoir between the 2nd and 5th of June - which is this week.

We have set up the following as our expectations for the drilling program:

Our Investments, Prominence Energy (ASX:PRM) and Global Oil and Gas (ASX:GLV) each have an interest in this well and the prospect.

PRM holds 12.5% interest and GLV a 25% interest in the Sasanof Prospect.

The Sasanof-1 well is targeting a prospective resource of:

A neighbouring project has had an exploration drilling success rate of 88% - 15 discoveries from 17 wells.

Rarely do we get to see ASX listed micro caps have exposure to oil & gas exploration events this big.

In fact, on sheer target size alone, we think this must be one of the biggest drilling events ever done by an ASX listed micro cap in recent decades.

All this doesn't mean it will be successful though. Offshore gas exploration is difficult, and the chances of success are low. This is a high risk drilling event with binary outcomes.

Based on the timelines provided in Friday's announcement, in less than 10 days, we should know whether our Investment has paid off and we hold an interest in Australia’s latest gas discovery in the liquefied natural gas (LNG) capital of Australia...

... or the drilling is a failure and there’s nothing, and both companies share prices take an aggressive beating. 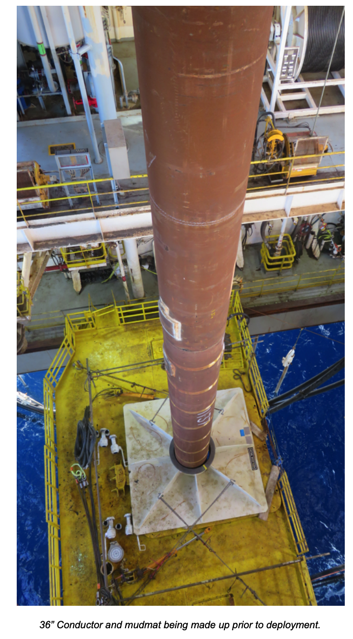 With drilling through the target reservoir unlikely to take that long, we have decided to set some expectations for the drilling program.

We have set what we think would be a bullish (Exceptional) outcome, base case (Good) outcome and bearish (Poor) outcome.

We came up with these expectations after studying the drilling results from other major discoveries in the North West Shelf including the US$12 billion Scarborough discovery being developed by Woodside/BHP, and the Greater Gorgon project (Australia’s biggest ever gas discovery) owned by a joint venture between supermajors - Chevron, ExxonMobil and Shell.

The key metric we will focus on is the “net pay” figure, which will measure the thickness of each gas column.

The discoveries at the Scarborough and across the Greater Gorgon gas fields were made with gas columns starting from ~20m and going higher than ~350m. We have therefore set our expectations as follows:

This isn't the only thing that will determine whether the drilling program was a success though.

Assuming a success case, PRM and GLV will still need to go back and analyse just how big the discovery is.

All of this is where exploration risks come into play.

As a result we have limited our exposure to this well to <2% of our Total Portfolio.

In the event the well is a big success, we anticipate each company's share price to go up many multiples of the current price.

In the event the drilling program is a failure, we anticipate taking a significant paper loss on our Investment (and then waiting to see what new project each company might acquire in the future).

To read our Investment Strategy in detail check out our launch Note for PRM/GLV here.

Alternatively, check out our 2022 PRM/GLV Investment Memo to see the key risks highlighted, our Investment plan and why we Invested by clicking on the image below. 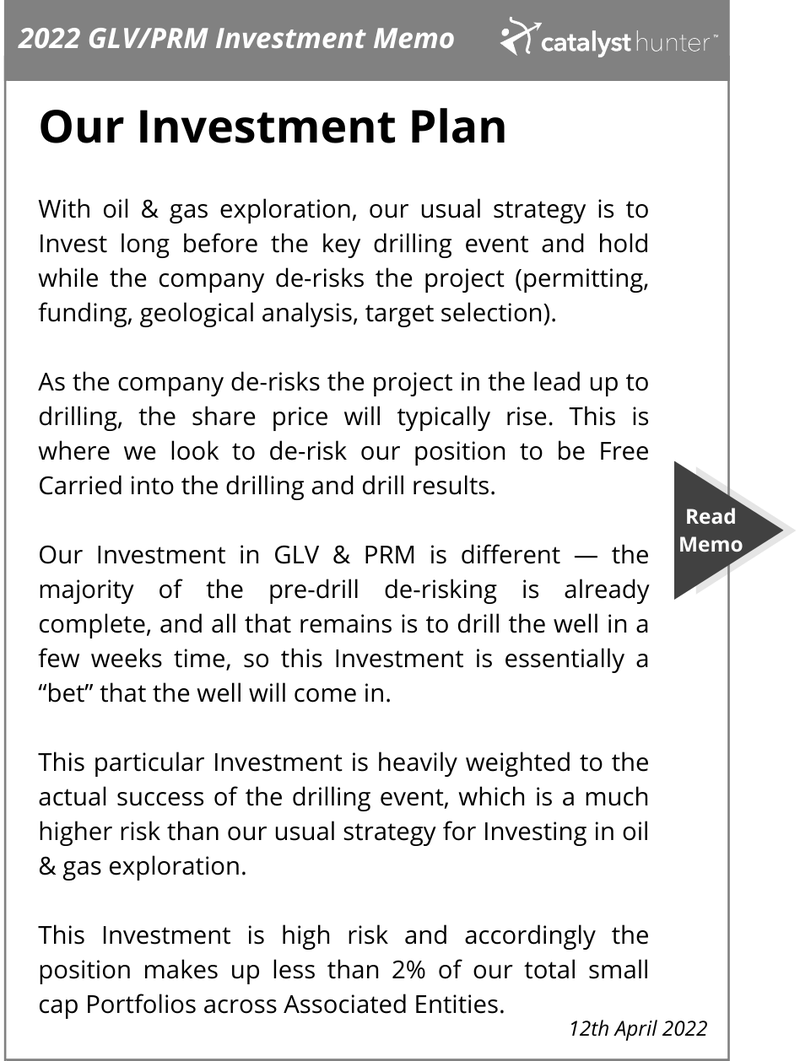 While our plan was to De-Risk our Investment and be Free Carried into the drill result, the share prices of PRM and GLV haven’t run up enough into the spud announcement for us to execute this plan.

Both shares started having a run about a month or so ago, but the run was snuffed out by the broader market correction.

So we haven’t sold any shares yet, and unless there is a significant re-rate during the next 10 days it looks like we will be rolling the dice on this Investment a bit harder than we had originally planned, and holding our full position into the result.

Sometimes the best laid investment plans don’t come off, but we will certainly be happy if the result comes in and if not - we will wait to see the follow up plans from PRM and GLV.

More on the drilling program

With drilling now started, we went back and looked at the well design released in an earlier presentation by PRM & GLV.

In that presentation, the well design shows that it is being drilled vertically down to a total depth of ~2,500m with the drilling program to go a little bit like this:

At the moment the drill rig has pierced the seabed and is drilling below a depth of ~1,070m.

Next, the rig will be drilling into the hard rock below the ocean floor for a further ~1,000m down to a total depth of ~2,030m.

During this stage of the drilling program we don't expect to see the company hit any gas columns.

After this, the company will run cement casing down to the top of the primary target zone, before the rig gets sent back down to drill into the final ~500m, where our Investments are hoping to make the gas discovery.

This means that the most important part of the drilling program will be right near the bottom - between ~2,000m depth and ~2,500m depth - and this is expected to occur between 2nd and 5th of June.

We have tried to illustrate this in the image below: 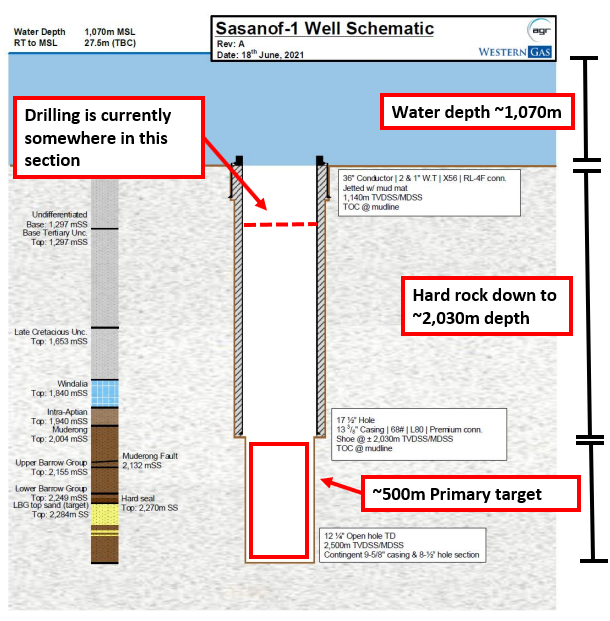 If successful and several gas columns are intersected indicating that a large discovery may have been made, the companies have previously confirmed that fluid samples and pressure measurements would be taken.

Following that, the well would be plugged and abandoned - and work would begin to start the calculation process for resource volumes.

Generally when we see the terms “plugged and abandoned” in oil and gas exploration this is just standard terminology meaning that the drilling team is leaving the site after they finish the drilling work.

If successful, the company can look to come back with all of the equipment required to flow test the well and simply have to re enter the same well.

This makes sense to us as the drilling program was likely done this way so as not to spend unnecessary capital on commissioning flow testing equipment without knowing whether there is a working gas reservoir.

What do we want to see from the drilling program?

Given that the primary target area being tested is up to a maximum of ~500m, we think a success case here would be if the drilling program was to intersect several columns full of gas.

We went back and looked at the drilling results of some of the majors in this area which can be found in this document released by the ACCC in 2008 (the document is a bit out of date, but it gives a good idea of what can be considered economic and what might not).

At the Scarborough project (owned by Woodside/BHP), discoveries were made with gas filled columns measuring between as high as ~108m.

At the Greater Gorgon project (the biggest discovery ever made in Australia), gas columns at some of the smaller gas fields were as low as ~20m. 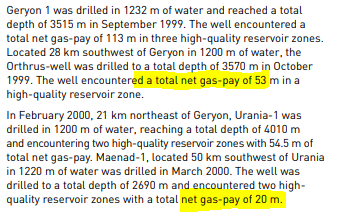 Therefore we have set up the following as our expectations for the drilling program:

We expect to receive these results over the coming weeks and will be hoping that drilling will deliver the gas columns needed to put a proven resource estimate behind the Sasanof prospect.

Summary of our coverage so far

For those readers who have missed all of our coverage leading up to Friday's announcement below are links to our previous coverage.

We have also included a brief outline of what we covered in each note and what you can expect to find in them.

Our previous coverage sets up the context for what could happen to our Investments pending the results from the drilling program.

In this note we launched our 2022 PRM/GLV Investment Memo and detailed our Investment thesis which highlights the 6 key reasons why we invested in PRM and GLV. 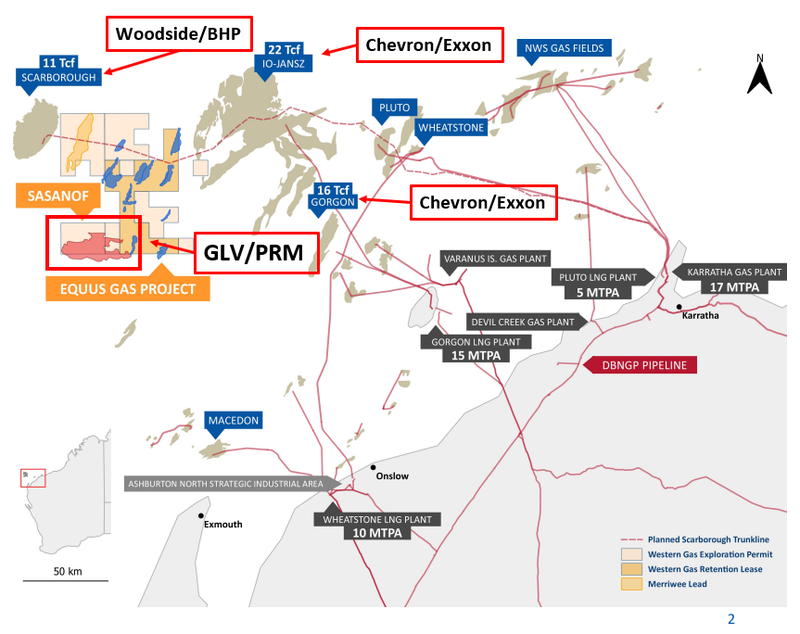 Here we did a deep dive on what makes the Sasanof-1 well a “high impact well” and how the prospect could become a takeover target for oil and gas supermajors if a successful discovery is made.

We specifically do a side by side comparison with previous international takeovers of major Australian gas discoveries. 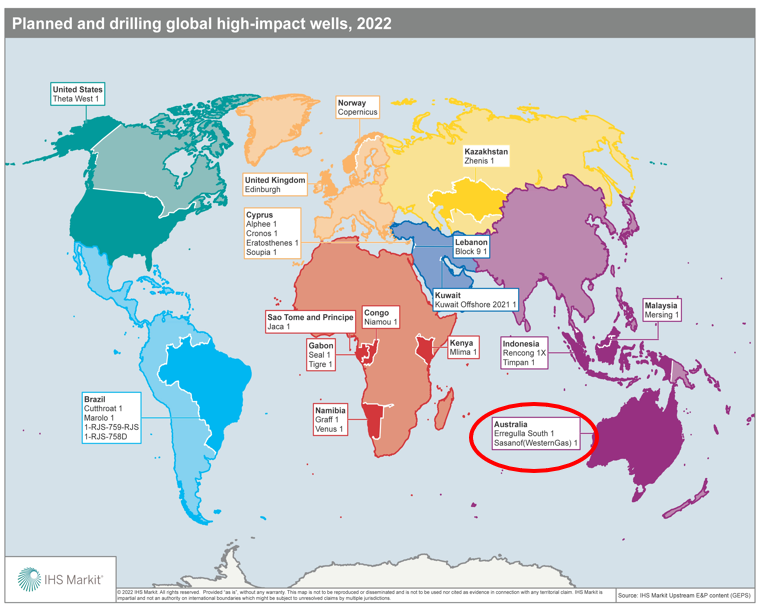 Here we do a deep dive on all of the key risks that the Sasanof Prospect has already had addressed from permitting, environmental, funding to technical risks.

We also did a side by side comparison of the technicals behind the nearby 378 Bcf and 16.4 million barrels of condensate Mentorc discovery and what that could mean for the Sasanof prospect which sits over a project area ~28x the size of Mentorc.

We also touch on the key risk that remains which is of course the most important - exploration risk. 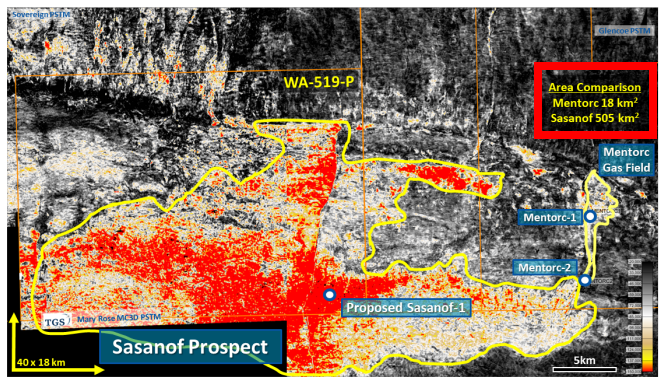 Last week we did a deep dive into the current news environment surrounding the global liquefied natural gas (LNG) markets and the upwards pressure on gas prices.

We also looked at how a new major discovery in the North West Shelf in WA (home to ~47mtpa of LNG export capacity) would fit into the global LNG markets in the event a successful discovery is made at the Sasanof prospect.

Here we touched on the success at the Equus project which sits right next door to the Sasanof prospect where 15 out of 17 previous drilling campaigns have made gas discoveries for a success rate of ~88%.

The Sasanof-1 well has a geological chance of success (GCOS) of 32% but we are hoping this will be discovery number 16 out of 18, and add to that already very impressive exploration success rate in this part of the North West Shelf in offshore WA.

Friday's announcement is the last material milestone that the joint venture needed to meet before the biggest risk that we highlighted in our 2022 PRM/GLV Investment Memo comes into play - Exploration risk.

The drilling program will have a binary outcome meaning:

We went into detail with respect to the exploration risk in a previous note which can be read here.

Alternatively, check out our 2022 PRM/GLV Investment Memo by clicking on the image below. 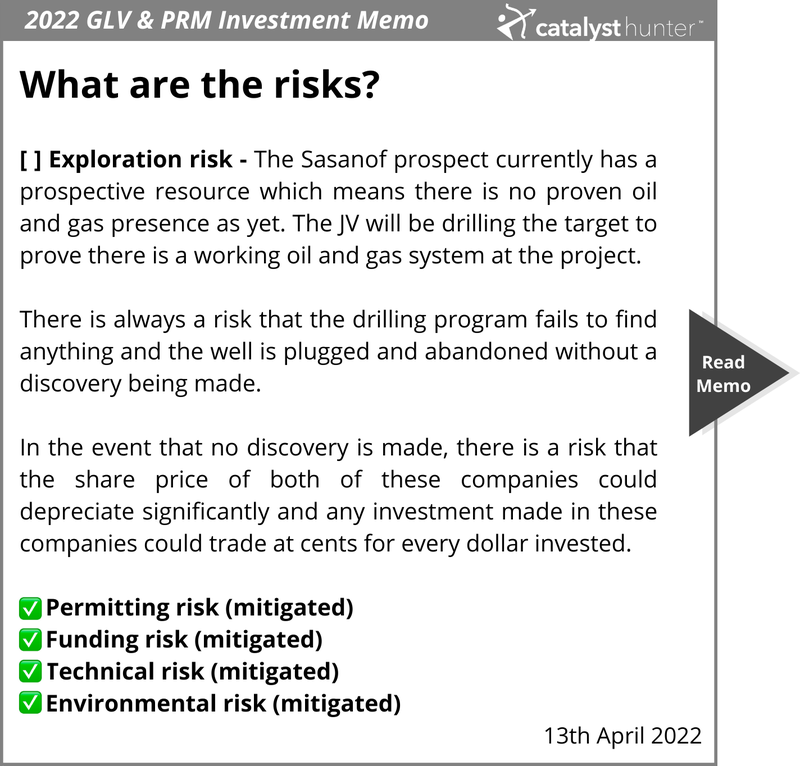 Below is our 2022 Investment Memo for PRM and GLV where you can find a short, high level summary of our reasons for investing. 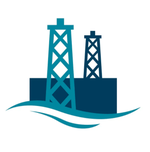 PRM & GLV: “No commercial hydrocarbons were detected” - so what happens now?

Drilling results to come in over the weekend