Disclosure: S3 Consortium Pty Ltd (The Company) and Associated Entities own 32,510,000 GGE shares. The Company has been engaged by GGE to share our commentary on the progress of our Investment in GGE over time.

A few months back our 2021 Catalyst Hunter Pick of the Year Grand Gulf Energy (ASX:GGE) announced a new helium discovery in Utah, USA.

This was a new discovery of a raw material that is critical to the semiconductor manufacturing supply chain.

GGE made the discovery after its first ever drilling program intercepted a proven helium structure with commercially viable helium grades.

GGE also happens to have an offtake agreement in place with Paradox Resources - the owner of the nearby Lisbon helium processing plant.

Now the company finds itself in a position where it could find itself going from helium explorer to producer off the back of one drilling program.

However, in order to become the USA’s newest helium producer, the key thing GGE needs to do now is determine gas flow rates and confirm helium concentration.

This will be done by flow testing the same well where it made the helium discovery earlier in the year.

GGE is rigging up right now, with the ultimate aim of producing a commercially viable flow rate.

In addition to a flow rate the data from this round of drilling will be used to characterise the reservoir and optimise production from the project (assuming the program is successful).

GGE is currently in a position whereby it has 2/3 of the key pieces of information needed for its project to deliver commercial quantities of helium to buyers.

Those key pieces of information are as follows:

With flow testing expected to commence soon, our expectations for a commercially viable flow rate is loosely based on the nearby Doe Canyon Helium Field (which is already operating and producing ~10.7M cubic feet of helium per month from several wells).

As a result, in our 2022 GGE Investment Memo, we set up our expectations for the upcoming flow test as follows.

The progress GGE has made with its first ever drilling program is promising so far (albeit with some delays getting a flow test).

Ultimately the upcoming results from the flow test will determine whether GGE’s Jesse prospect can produce and then sell helium or not.

If successful, GGE could not have timed the discovery of a new US based domestic helium discovery any better.

Helium is irreplaceable in the semiconductor manufacturing industry due to it being an inert gas.

The US is looking to “onshore” the manufacturing of semiconductors so as to future proof its supply chain. Signalling this is the recent signing of the “CHIPS” act a few weeks ago, which includes US$52.7BN to increase domestic semiconductor production.

Private capital is also following the government's lead with Intel investing US$20BN into a new plant in Ohio, Samsung planning to invest US$200BN on plants in Texas and Micron Technologies announcing its plans to invest US$40BN over the next 8 years on US based facilities.

We think that as all of these facilities come online, demand for US based helium will increase exponentially.

Add to this the impacts of the Russia/Ukraine conflict, which appears to have removed future Russian supply from global supply (a nation that was expected to become a top three supplier in 2025), and GGE’s discovery could be very well received.

With flow testing days away and a second exploration well planned for later in the year (Q4 2022), GGE is positioning itself perfectly to take that step from explorer to producer.

Today’s news brings GGE one step closer to finalising its first well at its US helium project which we had set as key objective #1 of our 2022 GGE Investment Memo.

To see all of our key objectives and GGE’s progress, check out our 2022 GGE Investment Memo by clicking on the image below: 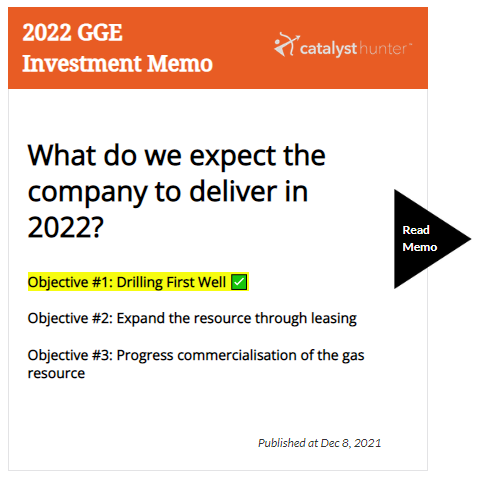 For those that are new to the GGE story, we have published our internal Progress Tracker (a Google Slides presentation) that details all of the work GGE has done up to now and what we want to see next from the company.

In our GGE “Progress Tracker” we show how GGE acquired the project back in September 2021 when helium prices were only US$200/mmcf.

The tracker goes all the way through to where the company finds itself now, potentially on the cusp of putting its project into production (pending a successful flow test) at a time where the helium price is trading at US$2,000 to US$3,000/mmcf.

To get up to speed with all of the progress GGE has made at its project over the last ~12 months, check out our Progress Tracker slide deck here, or by clicking on the image below.

Why is a US based helium discovery so important now?

In short, because the US is looking to bring the semiconductor manufacturing industry onshore.

The ultimate aim being to reduce its reliance on import partners (mostly from Asia) and to shore up its own domestic supply sources.

The newly signed CHIPS and Science act is evidence of the US government putting capital behind these strategic initiatives, providing US$52BN in funding to the sector with the spending split:

The US government isn't doing all the heavy lifting itself though.

Intel has already committed to spending US$20BN on new facilities in Ohio and even went on to say that it would consider expanding that investment to US$100BN based on access to the CHIPS Act incentives.

And last but not least, Samsung has already announced plans to build manufacturing facilities to the tune of US$200BN in Texas.

All of this investment into downstream manufacturing facilities will drive demand for US based commodities that are critical inputs in the semiconductor industry.

We think this trend will be caused by the exponential growth of chip demand over the coming years.

This re-affirms our view that GGE has picked the perfect time to be drilling to try and go from helium explorer to producer.

If GGE can prove out a large commercially producing helium project in Utah, then we think its project starts to have some element of strategic value in the domestic semiconductor manufacturing industry.

What’s next for GGE:

After today’s announcement, GGE should be re-entering the Jesse #1A well any day now looking to produce a maiden flow rate for its helium project.

This is the third and final step before GGE can prove that its project could be tied into existing infrastructure in the region which could see GGE go from helium explorer to producer.

We are hoping we won't have to wait very long to see if GGE can produce a flow rate and just how much helium can be produced.

Exploration plan for the other prospects at its US helium project 🔲

Whilst our current focus is on GGE re-entering Jesse #1A and trying to prove out a commercial flow rate, we are looking forward to GGE putting together a forward exploration plan across its other drilling targets at its US helium project.

GGE has already confirmed that its next exploration well is planned for Q4 of this year.

In our last GGE note, we covered the potential exploration upside at GGE’s project, which gives an indication of just how big GGE’s project could become.

To see our deep dive from that note click here and scroll down to the section “Plenty of other targets to follow up after this well”: GGE Hits Gas Column. Flow Rate and Helium Concentration to be Tested Next.

With flow testing likely to commence any day now, it is also important to consider what could go wrong with what GGE is doing.

There is always a chance that the workover rig is unable to obtain a flow test and that the well is plugged and abandoned because it does not meet commerciality requirements.

To see all of the key risks in details click on the image below. 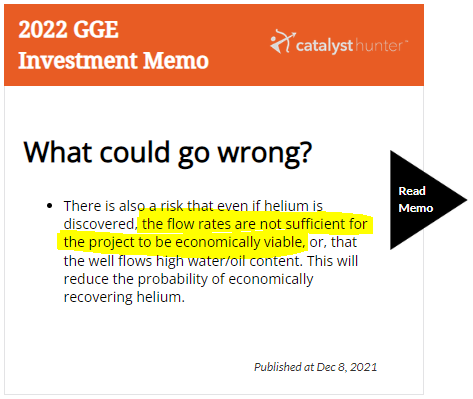 Check out our 2022 GGE Investment Memo to find a short, high level summary of our reasons for investing.

Disclosure: S3 Consortium Pty Ltd (The Company) and Associated Entities own 32,510,000 GGE shares. The Company has been engaged by GGE to share our commentary on the progress of our Investment in GGE over time.