GGE is gearing up for its maiden helium exploration well in a region of the USA dubbed the “Saudi Arabia” of helium.

The expectations were that this well would be drilled in mid April, but that's been now delayed by a few weeks. We are fine with the delay as that extra time has allowed GGE to raise $11M and shore up its balance sheet, which allows it to drill multiple wells.

GGE has also confirmed a revised drilling plan with the goal to test a 3x larger flow rate than the previous design - which means we could see a higher value discovery.

Initially, GGE was targeting a capital raise of ~$8M but the amount was increased to accommodate for increased demand from both domestic/international institutions.

Generally, junior explorers are able to raise just enough funding to get a drilling program done with investors looking for a discovery before committing serious amounts of capital.

We think the $11M in interest is again recognition of the quality of the helium prospect GGE has on its hand.

With that added funding, GGE announced that optimisation work had been done on the upcoming Jesse #1 well design which would allow for the flow rate of the well to be tested at 3x the capacity of the initial well design.

GGE confirmed that the optimisation work came as a result of strategic advice from regional operators including the operators of the nearby doe canyon helium field.

The upcoming well, which is now estimated to cost US$3.3M, as opposed to the initial US$1.6M (A$2.2M) means the first shot at making a helium discovery is twice as expensive as previously planned, but given the capacity to flow test has increased by 300%, we think the added marginal costs are worth paying for.

Even with the larger well cost, we think US$3.3M is still a relatively low cost to make a helium discovery.

GGE has a “strategic partnership” with its offtake partner Paradox Resources, who owns the nearby helium processing plant. We think this relationship could be behind the increased costs - and the increased capacity to flow test.

In short, we think Paradox needs GGE’s helium and GGE wants to provide a bigger amount of it.

Paradox’s Lisbon helium production plant is one of only 8 helium liquefiers in the US - and it represents 7% of North American helium liquefaction capacity.

This liquefier is capable of producing high purity 99.9995% helium - which attracts premium pricing, currently over US$1,000/mcf.

Due to a lack of raw helium supply, Paradox has been unable to restart the Liquefaction Plant.

This is where the revised well design is of importance, with the capacity to flow 3x the amount of helium, GGE could make the discovery that brings Paradox back online.

GGE could also be the key to unlocking the higher value add helium production opportunities for its strategic partner Paradox.

This is of course all contingent on a successful drilling program, which GGE has now delayed to commence towards the end of April.

In our last note, we mentioned that drilling was only 10 days away (assuming it was scheduled to spud on the 15th of April).

Today GGE confirmed that the drilling program will now begin at the end of the month. We think that given the optimisation works done on the well and the capital raised, the additional ~2 weeks is an acceptable trade-off.

We’ve seen small cap projects delayed years not months in the past.

But in this case, GGE’s delay is not due to operational difficulties - it’s because helium demand is so high.

Given we are only ~4.5 months into the year we think GGE has made strong progress to date despite the minor delay in drilling the first well.

Below is a list of key objectives we set for GGE in our 2022 Investment Memo together with the milestones we wanted to see the company achieve. 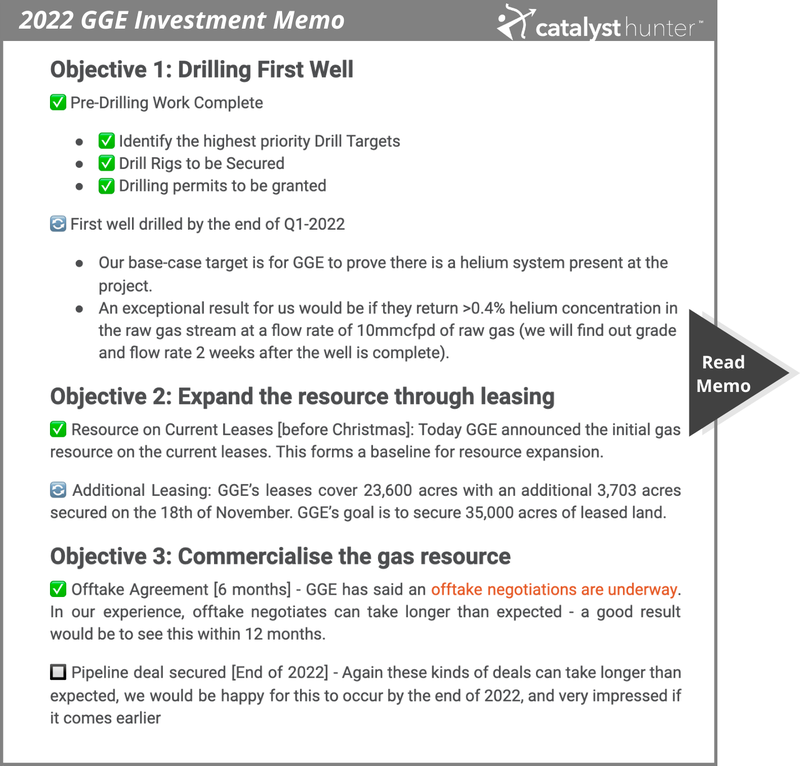 More on the capital raise and how we expect it to impact GGE’s share price:

The capital raise has been completed by GGE for $11M @ 4.4c per share together with 1 for 3 listed options exercisable @ 8c per share, expiring 3 years from the date of issuance.

This means that GGE will be issuing:

The shares are expected to be issued to the capital raise participants on the 28th of April but the options are subject to shareholder approvals and will only become tradable on the ASX after applications are completed for their listing.

How do we think the capital raise will impact the share price?

Generally when a company does a large capital raise we expect to see the company’s share price move closer towards the price the cash was raised at.

At the time of GGE going into a trading halt the share price was last trading at 4.9c per share, ~11% higher than the capital raise price.

Given that the investors who purchased shares in the capital raise will also be issued 1 for 3 free options, we suspect some may look to sell some parts of their shareholding which will create some short term pressure on the share price.

Usually with these larger capital raises, the discount can be up to ~20-25%, which creates more incentive for investors to sell their shares on market.

In the case of GGE, especially given the capital raise had to be increased to accommodate for all of the additional demand (being increased from $8M to $11M), we think this pressure is unlikely to be as significant.

With the Jesse #1 drilling event <2 weeks away now, we think investors will look to carry a larger position into the drilling event then they would otherwise normally have.

Another major positive for GGE is that the $11M adds to an already healthy cash balance ~$3M (as at 31st December 2021).

This means GGE can continue planning for its second follow up well and in the event of a successful discovery being made, investors will need to buy shares on market with there being no short term opportunity to get in via a capital raise.

Why is the Jesse #1 well going to cost more now?

Previously GGE had estimated the drilling of the Jesse #1 well to be ~US$1.6M.

In today’s announcement GGE confirmed that the actual costs for the well are likely to be closer to ~US$3.3M.

This mainly comes down to three key changes to the upcoming drilling program.

First, GGE previously had a far smaller cash balance to work with.

With only ~$3M in cash in the bank as at the 31st of December 2021, GGE had a much smaller budget to work with going into the Jesse #1 well.

The idea at the time would have likely been to do the drilling program at whatever the minimal amount of costs are and then follow up a successful discovery with fresh capital raises and more drilling.

With the $11M raised today, GGE is not so much limited by its cash balance anymore.

Second, the landscape for helium projects has completely changed.

Since the initial planning for the Jesse #1 well started, GGE has managed to sign both an offtake agreement and a strategic alliance with the owner of the Lisbon helium processing plant nearby (Paradox Resources).

This has significantly de-risked the project and now means that GGE has a certainty of demand.

That rush to secure domestic helium supplies has come after the Russia/Ukraine conflict.

With Russia previously on track to becoming one of the world's top three helium producers before any sanctions and then it's Armur facility catching fire (capable of producing ~11% of global supply), the helium market dynamics are now completely different. 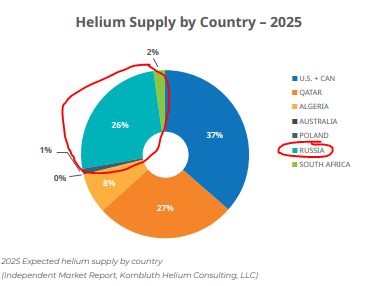 Add to that the unplanned shutdown of the Cliffside helium plant (the biggest producer of helium domestically in the US), and GGE’s drilling program looks like it has been timed to perfection.

Third and finally, all of this has meant GGE is going to be drilling a larger well.

In today’s announcement GGE confirmed that it had completed optimisation works on the design of the Jesse #1 well.

After completing a review of the seismic and reservoir data in and around the Jesse #1 well drilling location, GGE moved the drilling location ~15m to the south and have also increased the production tubing size to ~11cm from the original ~7cm.

To see our take on the seismic data check out our latest note here.

The end result being that the newly designated Jesse #1A well will allow for gas flow rates 2-3x higher than the original design.

This means that should a successful discovery be made, the helium production will also be much higher.

So in effect, GGE will now be spending ~100% more on the well but in return will have flow rate capacity 2-3x higher than originally planned.

We think that the additional ~US$1.7M over the initial well design is well worth paying for that sort of incremental change in flow rate capacity.

The Jesse #1A well is now fully permitted and rig contracts are all in place for the drilling program expected later this month.

Just last week GGE expanded its partnership with offtake partner Paradox Resources by signing a “strategic alliance” which is designed to fast-track and optimise any commercial opportunities that exist in the helium market on a joint venture basis.

This means that instead of GGE simply supplying raw helium to Paradox who then goes and on sells it after refining it, GGE can share in the higher value add refined product sales.

The strategic alliance mostly centres around four different opportunities for GGE and Paradox Resources to target (assuming GGE can make a successful discovery):

First, is the potential to restart Paradox Resources’ Helium Liquefier:

Third, is the expansion of the existing offtake agreement into an almost joint venture:

We recently wrote up a summary of the strategic alliance via what we call “Quick Takes” over on the Next Investors webpage.

You can check out the detailed Quick Take by clicking on the image below.