Our 2021 Catalyst Hunter Pick of the Year, Grand Gulf Energy (ASX:GGE), just took another step towards going from helium explorer to helium producer.

We've been following GGE closely for the last few weeks in our “upcoming share price catalysts” list - and that catalyst just came through.

After completing a workover program at the Jesse #1A well, GGE received multiple samples with consistent helium grades ranging between 0.44% – 0.65%.

Importantly the helium grades are higher than the already producing Doe Canyon field, which is only 24km to the east of GGE’s well location.

For context, Doe Canyon is producing helium with average grades between 0.4-0.5% and is the second largest helium discovery in North America over the last 70 years.

Considering that this is GGE’s first ever well at its helium project - and a wildcat well at that - the confirmation of commercially viable helium grades is an excellent first step towards commercialising its 6.3 bcf prospective helium resource.

For the readers who have been following our previous coverage of GGE, wey established three different scenarios for our expectations for the Jesse #1A well: 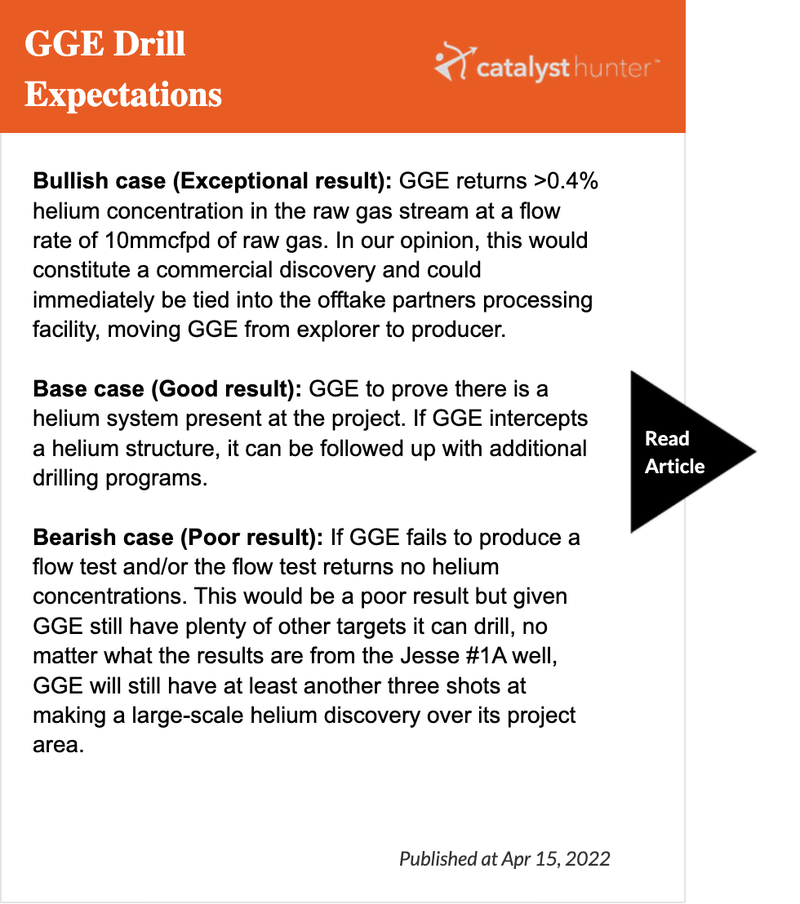 The only thing missing for the company to hit our bullish case was if the company managed to put out a steady flow rate.

The positive news is that GGE has confirmed the reservoir section displayed pressures that are amenable to producing a flow-rate.

The only issue being the water content which needs to be designed around in future drilling programs.

Today GGE also stated that it would get its technical team to begin work putting together a new well design which could “enable gas production”.

GGE confirmed that planning and equipment resourcing is already underway with a view to re-entering the Jesse #1A well in Q3 2022.

Overall, we think GGE has actually managed to achieve somewhere in between just below our bullish expectation but well above our base case expectation.

GGE now has two of the three key pieces of information that it needs to declare a commercial helium discovery and take itself from helium explorer to producer.

Those key pieces of information discovered during the drilling of Jesse #1 are as follows:

With all of this information at hand, the next step for GGE will be to prove that its project can deliver a commercially viable flow rate.

GGE is also well placed to do this work with $2.5M in cash at the end of the March quarter and $11M raised recently via a placement at 4.4c per share, well above the current share price which was 2.3 cents at last close .

This should mean GGE have ~$13.5M in cash (before paying for Jesse #1A) to prove a commercially viable flow rate.

GGE already has an offtake agreement already in place with “strategic partner” Paradox Resources to buy any commercial helium that GGE can produce, who owns the nearby Lisbon helium processing plant.

All GGE have to do now is to prove out a commercial flow rate that can be tied into all of the existing surface infrastructures so that it can start receiving revenues for its helium. 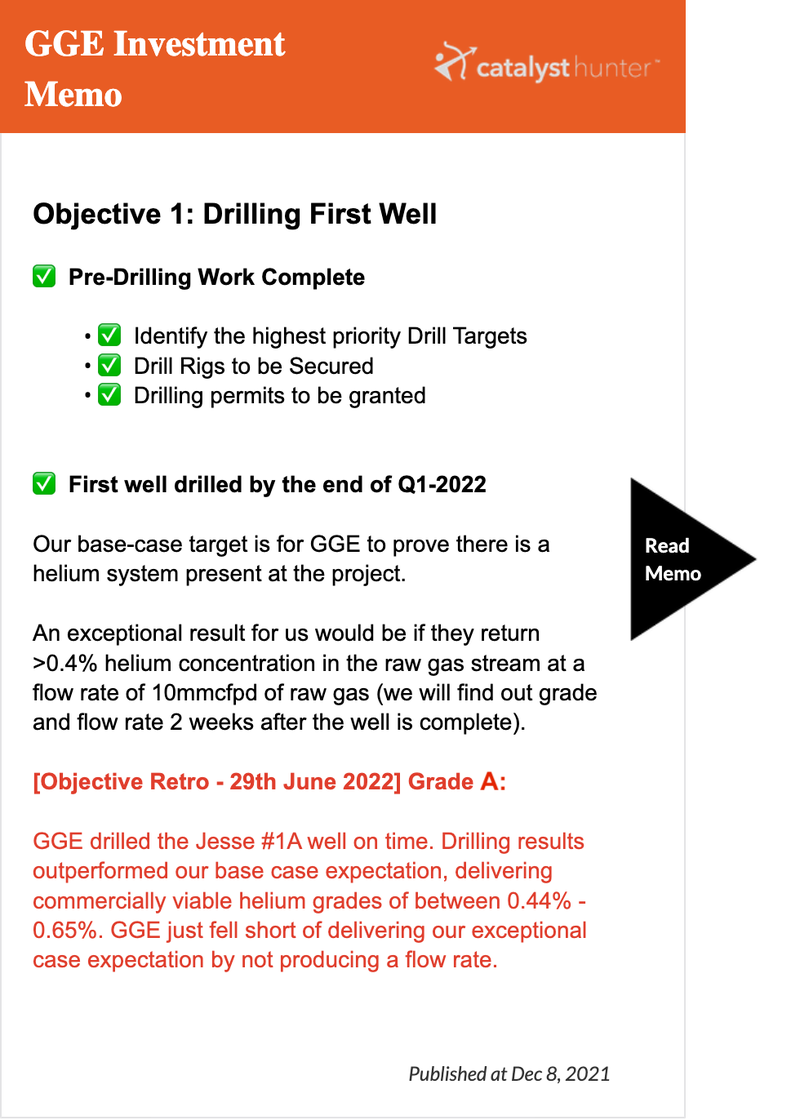 More on the Jesse #1A results:

With the drilling program completed and the workover rig run over the Jesse #1A, now is a good time to take stock of what we think GGE has on its hands.

Less than a month ago, GGE first came out with its announcement confirming a 62 metre long gas column had been intercepted.

Importantly, the ~203 foot intercept (62 metres) was made across a primary target which GGE had previously estimated to be at depths of between 8,100 feet and 8,300 feet, effectively GGE managed to intercept gas columns throughout the entire primary target area.

With a reservoir section identified, GGE then brought in a workover rig and started testing the well to see whether or not it would produce commercially viable gas flow rates and if the helium concentrations (grades) were high enough to announce a new helium discovery.

For some context on commercially viable helium grades, we only need to look at the already producing Doe Canyon helium field which sits only ~15 miles (~24km) to the east of GGE’s project.

The Doe Canyon field which is the second largest North American helium discovery in over 70 years is producing helium out of seven different wells with helium grades of between 0.4-0.5%.

Comparably, GGE’s highest helium grades are 30% higher than a helium field which is responsible for producing up to 50% of new North American helium production over the last five years. 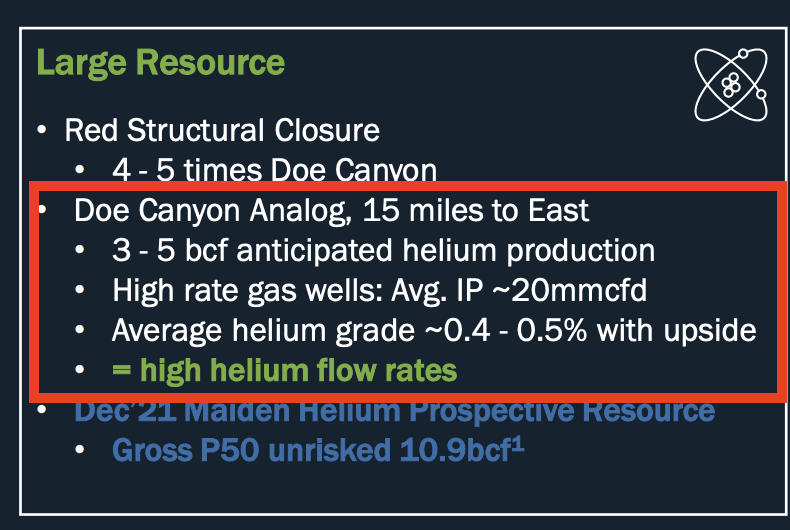 With the results from today, GGE now has two of the three key pieces of information required to declare a new commercial helium discovery.

The final piece to proving a new discovery was the flow rate, which GGE failed to produce in today’s announcement.

We think the information gathered to date is a big step in the right direction though, especially considering that this is GGE’s first ever drilling program.

In contrast, the Doe Canyon helium field is producing helium from a combined seven different wells.

Clearly, the Doe Canyon field was put into production after several rounds of drilling programs.

GGE is now in a similar position whereby it can apply all of the learnings it gained from the Jesse #1A well and apply it to any follow-up exploration program.

GGE clearly stated in its announcement that “The work-over rig has been de-mobilised to allow the technical team to develop the appropriate well design to enable gas production”.

This to us shows that GGE is confident that by putting together a new well design the company can address the risks that it thinks stopped the well from producing commercially viable flow rates.

This brings us to what is next for the GGE and the Jesse #1A well.

We have now established that GGE has two out of three key pieces of information before it can announce a new domestic US helium discovery.

Now the company has confirmed that it can produce commercially viable helium grades of between 0.44 and 0.65% helium.

Importantly these are grades higher than the ones that can be found at the already producing Doe Canyon helium field next door to GGE.

The third and final step is for GGE to prove a commercially viable flow rate.

In today’s announcement, GGE confirmed that it would get its technical team to begin design works for a new well that could “enable gas production”.

GGE also confirmed that planning and equipment resourcing is already underway with a view to re-entering the Jesse #1A well in Q3 2022.

Exploration plan for the other prospects at its US helium project 🔲

Whilst our current focus is on GGE re-entering Jesse #1A and trying to prove out a commercial flow rate, we are looking forward to GGE putting together a forward exploration plan across its other drilling targets at its US helium project.

In our last GGE note, we covered the potential exploration upside at GGE’s project, which gives an indication of just how big GGE’s project could become.

To see our deep dive from that note click here and scroll down to the section “Plenty of other targets to follow up after this well”: GGE Hits Gas Column. Flow Rate and Helium Concentration to be Tested Next.

Check out our 2022 GGE Investment Memo to find a short, high level summary of our reasons for investing.