We are one of the largest TG1 holders and are closely following its many upcoming exploration catalysts.

With the gold price testing highs recently, today’s 4g/t gold result from maiden drilling was the highlight for us (amongst a few other decent intersections) and TG1 is calling it a DISCOVERY in their announcement.

First step done - now the next step is for the TG1 geologists to analyse these maiden results and choose some new drilling targets to test just how big this discovery is... this will take a few weeks and then a second ever round of drilling will be where we see if this initial great result was a fluke or not...

Backing an initial great result up with an equal or BETTER result is where share price rerates can happen, especially if the gold price moves upwards in the meantime and June tax loss sellers have finished exiting...

TG1’s Ida Valley gold project sits in the prolific Yilgarn Craton - home to several multi million ounce gold discoveries. TG1’s project sits within 100km of a lot of them - here you can see them strung along the Goldfields Highway: TG1 is hunting for one more giant gold deposit in this well endowed region of WA.

There are a number of greenstone belts in the Yilgarn Craton that host these gold deposits, and TG1 today confirmed the presence of a new gold mineralised greenstone belt here.

This is an excellent first step for TG1 in its efforts to make a large metals discovery.

Greenstone belts are typically where gold mineralisation is prevalent - TG1 wanted to test via drilling to see if gold was present - turns out it is.

Follow up diamond and RC drilling is now being planned on the confirmation of TG1’s new outcropping bedrock gold discovery.

This was TG1’s first ever drill programme at its Ida Valley ground - and four of TG1’s eleven drill holes returned assay results of greater than 1 g/t gold.

OTHER CATALYSTS: TG1 is a multi project exploration play - We are also patiently waiting for TG1’s heliborne VTEM survey EM targets on its WA copper project - this survey has begun and any EM conductors would be another TG1 catalyst.

The copper price is also looking strong... But for now, back to TG1’s gold project.

TG1 found gold mineralisation that is open at depth and along strike. A + 1km long gold soil anomaly located south of today’s drill results remains to be drill tested.

So what is a greenstone belt and why does this matter?

WA has a number of greenstone belts (green in colour, hence the name), well known for multi-million ounce deposits.

Essentially they are areas of very old rock that have undergone heat and pressure and that have been pushed up toward the surface.

To find a new mineralised (with gold) greenstone belt is quite rare, which makes TG1’s current drilling programs notable, especially as this new discovery appears to come to surface with outcroppings of bedrock.

Which means the gold mineralisation could be quite shallow - but it is early days.

When TG1 announced it would start drilling MD Ashley Hood said something that grabbed our attention: “It is rare to find a new greenstone belt of this scale with outcropping mafics and ultramafic units carrying gold mineralisation in favourable settings between well known mining districts.”

Today’s results, which come from one of two drill programmes being conducted by TG1, back up his comments.

The potential to deliver strong follow up results remains, especially with plenty of drilling still planned, including a follow-up RC and diamond drilling program.

We invested in TG1 in the company’s $6M IPO in April this year and are one of TG1’s biggest holders.

We invested because we like the small enterprise value, and the fact it is well funded for multiple drill programmes over the coming months - this means plenty of share price catalysts to come.

We like the fact that the original owners of TG1’s projects are now directors and substantial shareholders in TG1 and that their stock is escrowed for two years - we are comfortable they are in this for a large metals discovery.

TG1 is early stage exploration, with no guarantee of success, but we do like the upside here for early stage investors like us.

We are holding TG1 long-term - likely at least 12 months to take advantage of capital gains tax (CGT) discounts - and to see what TG1 can find in the coming months.

However if the share price rockets on a large metals discovery before then we might look to take some profits. This would be well above the IPO price - we are patient holders and in exploration we get in early and wait.

Remember exploration investing is speculative investing, so only invest what you can afford to lose.

TG1’s drilling results today are one in a series of announcements expected to come from a number of upcoming, funded exploration campaigns across multiple projects over the coming weeks and months.

We think that the market will respond well to the rapid stream of newsflow, especially if TG1 hits on something substantial.

This project is between Lawler’s and Mt Ida Mining Districts. This project sits 50km north-east of Kalgoorlie in WA. As shown below, the project consists of three Exploration Licences covering a combined area of 199km2.

You can see all the multi-million ounce gold discoveries dotted around TG1’s ground on the map below: 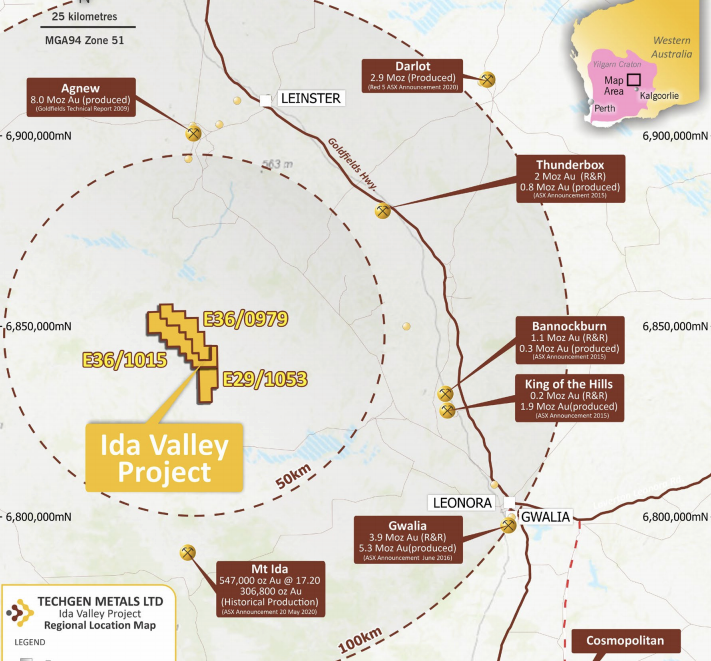 All in all, today TG1 confirmed there were multiple mineralised zones intersected and multiple geochemical targets remain to be tested.

TG1 has also completed its soil program, which steps out north and south of previously identified surface gold anomalism.

Having analysed this data, TG1 is now well placed to follow-up with reverse circulation and diamond drilling.

One other thing of note is the recent application for an additional Exploration Licence (E36/1015) along strike from the identified gold mineralisation provides additional similar scale magnetic anomalies adjacent to and cross-cutting the Ballard Fault.

This has secured TG1 100% of the newly identified gold mineralised belt.

What to expect next from TG1: