Surely there must be RAS news coming soon…

We recently invested in Ragusa Minerals (ASX:RAS) at 6.5c.

RAS currently has over $4M in the bank - and with a current market cap of $11M at 8.7c per share, we like RAS’ enterprise value of ~ $7M given the two new projects it recently acquired.

Since we invested in RAS we have been patiently waiting for its WA halloysite tenements to be granted so not a lot has happened in terms of newsflow... yet.

But now that a few months have passed since news of the new project acquisitions, and after taking another closer look at RAS’ September 2021 investor presentation, we think RAS must be getting closer to being able to deliver on its exploration plans.

In addition to this, the RAS share price has started to move in the right direction over recent weeks, picking itself up since August and looking like it has found a new base above 8c.

We think perhaps some stale holders have left the building since the new projects were acquired, and the new RAS investors like us are energised about RAS’ upside and choosing to hold.

While we wait for material catalysts to start coming through, here is a reminder of RAS and why we invested.

RAS has three projects - However our primary reason for investing in RAS is the two NEW projects it has acquired.

RAS Existing Project #3: Gold in Zimbabwe - RAS had this project prior to our investment, and while it looks promising, it's not what we are invested for so we won't be focusing on it much today.

Here is a reminder of each project we invested in AND what to watch out for next (including potential risks).

Halloysite has drawn the attention of global investors because it is a relatively rare mineral that is experiencing a sustained increase in demand due to its extensive applications in new age industries.

As investors have gained an understanding of the applications of halloysite in fast growing high-tech products, they have flocked to stocks that provide exposure to the mineral.

Supply shortages have been exacerbated by China closing a number of environmentally damaging mines.

What does RAS have to do with halloysite?

RAS acquired 100% of the “Burracoppin Halloysite Project” in WA.

You don't need to remember that project name, but what you do need to remember is that this project is two tenements (currently under application) that basically surround another of our investments, Latin Resources (ASX: LRS) halloysite ground.

We have been invested in Latin since November 2020, primarily as we wanted exposure to the upside of its halloysite resource definition growth phase.

Currently Latin Resources is capped at $60M and has a 207 million tonne inferred mineral resource tonne halloysite resource along with a number of other assets. You can read all about LRS here.

Andromeda Metals is the big brother comparison to LRS, currently capped at $370M.

Andromeda is a much more advanced halloysite company, with a de-risked 100 million tonne JORC resource, and offtakes signed with customers.

Andromeda’s progress and $370M valuation demonstrates the upside potential for tiny $11M capped RGS on its halloysite project alone (not to mention RAS’ Alaskan gold project- which we will get to further down).

Here you can see the RAS tenements under application that surround Latin Resources’ ground - Latin’s Cloud Nine halloysite deposit looks like it wafts right across into RAS’ ground - I think we know where RAS will be aiming to drill test first: 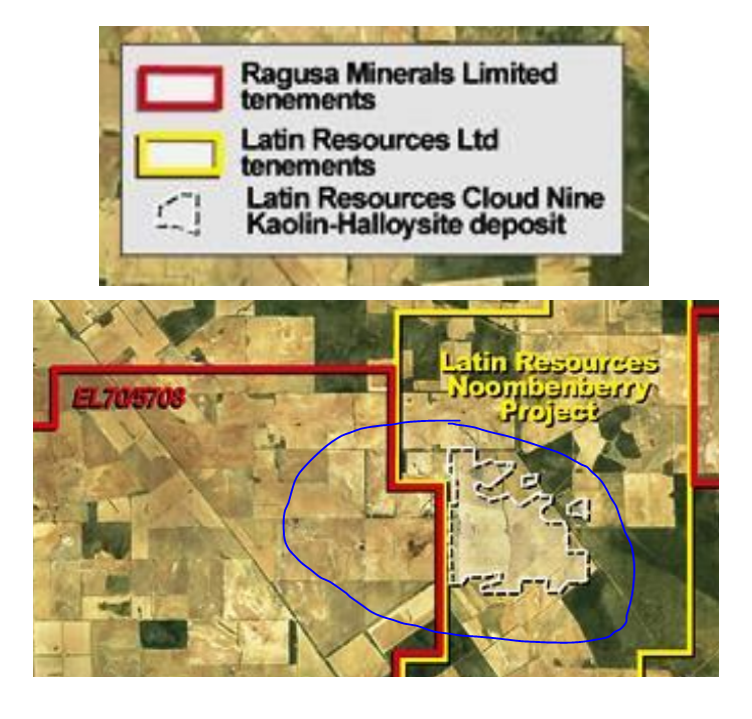 We are betting that a decent chunk of the LRS kaolin-halloysite resource encroaches into RAS’ tenement and will re-rate RAS if this is proved out with some drilling.

As stated by Latin Resources when it was reflecting on its journey from exploration to resource definition, ‘’Within only 18 months of identifying the opportunity for halloysite, given the very shallow nature of the resources (average of less than 4 metres from surface), LRS has been able to rapidly define this maiden mineral resource estimate which has substantial potential to grow, being open in all directions.’’

An important takeaway from the above statement is that it clearly states that the defined resource is open in all directions, which would include directly to the west, north-west and south-west.

Which to us sounds like there must be more halloysite on RAS’ ground... ancient geology does not respect tenement boundaries.

RAS is just at the beginning of its halloysite exploration - but given drilling is near surface and typically only light aircore drilling is required, we are hoping RAS can deliver a decent result to a similar time frame.

What near term RAS newsflow is coming:

Here is what we are looking out for from RAS over the coming weeks:

The RAS back up plan if it turns out the WA halloysite project does not move forward is an Alaskan gold project that sits in a well endowed gold neighbourhood.

What does RAS have:

RAS Alaskan gold neighbour #2 is the $220M capped GoldMining Inc (TSX: GOLD) who has the Whistler and Raintree deposits that total a combined 4.78 million ounces.

So that’s almost 9.5 million ounces of gold in the vicinity of RAS’ Alaskan gold project.

Here you can see it on the map - RAS’ ground is marked in red, while Nova is in yellow and Gold Mining Inc is in blue: 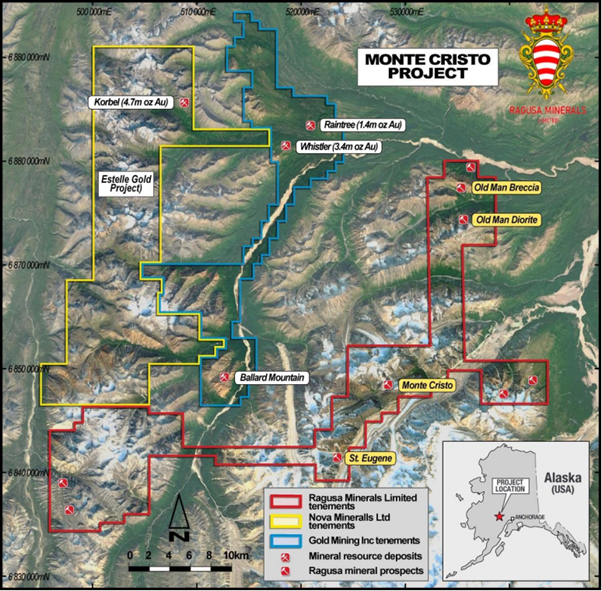 RAS’ ground has four historical prospects which are now priority exploration targets, and the ground has several similarities to Nova Minerals gold deposit.

What near term newsflow is coming:

Define drill targets - RAS will take these samples and analyse along with historical information, so it can pinpoint some drill targets with the hope of getting some decent gold intercepts.

Why we are RAS investors

In July we made a long term investment in RAS.

In summary the following were the key reasons for our investment - even before taking into account the potential for future catalysts such as exploration success.

● Undervalued - We think the current enterprise value of $7M doesn’t come close to asset worth - we will find out over the coming months once exploration fires up.

● Cash of ~ $4.7M - This is enough cash to deliver some near term exploration wins.

Lonely Mine Gold Project (Side Bet)