We were encouraged by MAN’s drilling update yesterday - two holes have been completed with two more planned and a nice photo of a drill core showed visible sulphides PLUS another conductor was discovered down hole.

We are surprised to see so much selling pressure in the stock on this news and this early in the drilling campaign, with no assay results close to being released yet.

Drilling can be quite a volatile time for investors in exploration stocks, with traders coming in and out of a stock on speculation - it looks like a big group decided to cut and run early for whatever reason.

We are hoping it’s just a short term spike down fuelled by panic sellers followed by a quick share price rebound once they are all done.

MAN recently raised $12M at 20c, so has plenty of cash in the bank - but is now trading significantly below the placement price right now ahead of more newsflow (we also participated in the 20c raise).

While we wait for the assay results and the next holes to be drilled, there are two key takeaways from the ASX announcement yesterday:

It’s generally a good sign when an ASX explorer posts a photo of the drill core showing promising bands of mineralisation - and yesterday we got a glimpse of MAN’s drill cores.

Scroll down to see MAN’s cores.

2. A new down hole ‘conductor’ target was identified - its being drilled now

During drilling, MAN took the opportunity to run some down hole electro magnetic surveys to see if it could pick up any deeper conductors beyond the drill hole.

This turned out to be a success - with MAN identifying a very strong conductor plate away from a drill hole.

MAN has decided to immediately drill this newly identified conductor given the rig is on site right now.

MAN was looking for “zones of disseminated and semi-massive sulphides in mafic-ultramafic rocks” during drilling - lots of geo-talk here but basically this combination of rock types is what we want to find.

That box has been ticked, with MAN hitting a few promising intersections with these zones detected.

The appearance of ultramafic rocks containing distinct sulphides including chalcopyrite is highly encouraging. 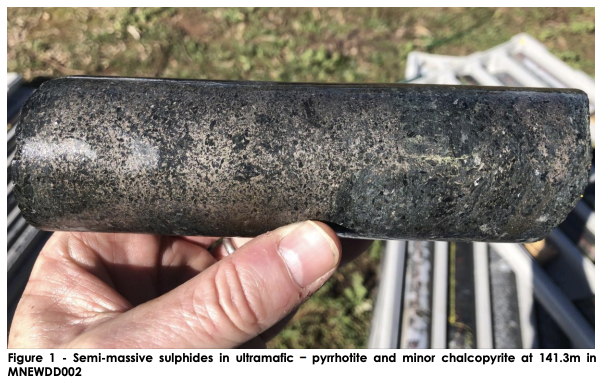 There were some more sulphide rich zones in the same drill hole - with 60% sulphide content measured in bands: 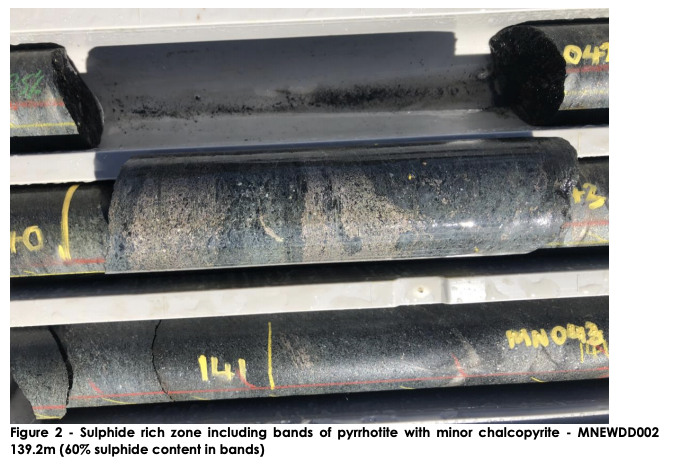 Promising visuals like the above bodes well for the assay results, which will probably take another couple of weeks to come through.

MAN’s understanding of the geological system is building rapidly with every metre drilled and each down hole EM survey conducted...

MAN is drilling this new conductor right now via an additional hole - so that’s a fourth conductor that is being drill tested during this current programme.

If yesterday’s news was so good, why was MAN sold down?

MAN is currently trading at ~ 11c at the time of writing, having been sold down yesterday from 15c.

MAN has not traded this low since March 2021, despite being well funded, and on the cusp of assay results.

MAN raised $12M at 20c just a few weeks ago, giving it plenty of cash for exploration over the coming months.

All of the 20c placement participants are underwater right now, so perhaps there is some placement panic going on.

Caspin Resources, another Julimar explorer, which had been performing so well in recent weeks has taken a bit of a dive - perhaps Caspin went up too fast and reality has set in with holders there.

It could be a case of Caspin’s recent performance spooking MAN investors and reducing confidence.

MAN is capped at less than $50M. We think a successful result could see MAN’s market cap surge up many times from its current valuation.

As we said above, MAN recently raised $12M at 20c so has plenty of cash to work on its exploration plans.

We also invested in the 20c MAN capital raise, and are surprised to see it trading around the 11c mark today well before any proper results have even come out.

$12M is a lot of cash for MAN to continue its exploration without having to need to raise in the medium term.

We have not fully free carried yet but will look to do so if we get positive drill results and hopefully MAN starts to climb back up again.

What to expect next from MAN

Here is what we might expect to see from MAN over the coming weeks, based on MAN’s announcements and our knowledge of how exploration campaigns typically run:

Results of June drilling could be major catalyst for Mandrake