Latin Resources (ASX:LRS) is preparing to conduct a new exploration program on its 100% owned and optioned lithium tenements in the state of Minas Gerais in Brazil.

In fact, the Jequitinhonha valley is a highly underexplored region that currently contains 100% of the official lithium reserves of Brazil.

It is here that LRS intends to define drill targets in the coming weeks and commence drilling on its lithium assets in Q2 2021.

The rapid drill testing of any potential lithium deposit will enable management to quickly advance to JORC compliance.

This lithium play highlights just how diversified LRS is.

Its diversification in battery metals is one of the key reasons why we invested in LRS.

However, as readers would know, we took a position in LRS in November 2020 and continue to maintain a large holding, also based, in part, on the company’s halloysite project in WA.

LRS has drill tested one of Australia’s few known occurrences of ultra-high-grade halloysite and looks to be following in the footsteps of one of the best known halloysite companies on the ASX, the $699M capped Andromeda Metals. Stock in Andromeda has risen from 5 cents per share to ~30 cents today to deliver investors a more than 500% return on the back of its halloysite play.

As such, the market may have forgotten that LRS has several highly prospective lithium assets.

Today’s report intends to bring its lithium play back into the spotlight.

And there are certainly plenty of catalysts to come from this.

Latin Resources (ASX:LRS) is about to define drill targets and prepare for drilling at its lithium projects in South America.

The projects are located in the Jequitinhonha valley region of Minas Gerais, host to the Eastern Brazilian pegmatite province and home to Sigma Lithium and lithium producer Companhia Brasileira de Lítio (CBL).

It is worth noting again that this is a highly underexplored region that currently contains 100% of the official lithium reserves of Brazil. 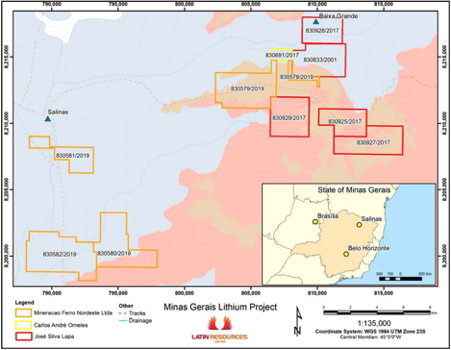 Latin Resources has appointed local geologists to carry out field work to define drill targets on the Salinas tenements.

It should be noted that LRS completed significant field work on the tenements in 2019, locating several occurrences of spodumene (as seen below) never previously known or reported. 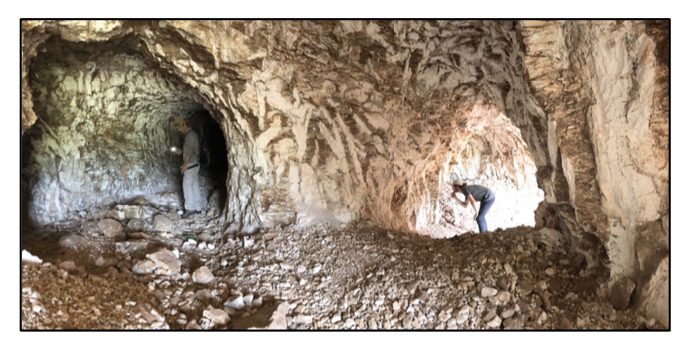 LRS believes it can effectively and expeditiously execute exploration programs to deliver positive news and results to its shareholders.

During this exploration program, the largest exposure of pegmatite visited on the tenement displayed 12 metres of outcrop width, and the visual estimation of spodumene mineralisation was 25%.

The discovery of spodumene mineralisation in what could be associated pegmatites appears to bode well for the future.

The pegmatites cross-cut the rivers with exposure in a general north north-west trend, continuing into the neighbouring tenement to the south.

Further work on the pegmatites will now be followed up to determine their relationship to the Salinas main pegmatite which is 1.5 kilometres north-east.

The 600 metre distance between points in the west and points in the east, show spodumene mineralisation as a good sign for a potential continuous pegmatite field below surface.

Investors looking for other projects in the region that could provide a guide as to what may lie ahead for Latin Resources could find Sigma Lithium (TSXV: SGMA) a useful point of reference.

Sigma is the most active lithium explorer in the region with a world-class lithium resource base which currently stands at 45.7 million tonnes at 1.38% Li2O. 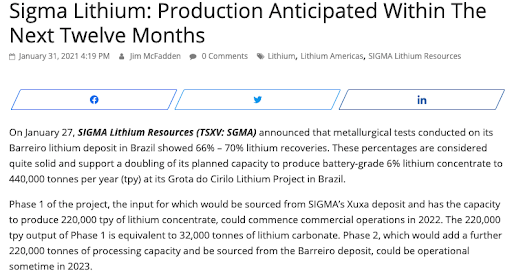 Sigma is focused on 10 high-grade hard-rock lithium pegmatites, nine of which were past-producing lithium mines, yet have reported over 200 pegmatites within their tenure. It is now in pre-construction of its large-scale lithium concentration commercial production plant in Minas Gerais. 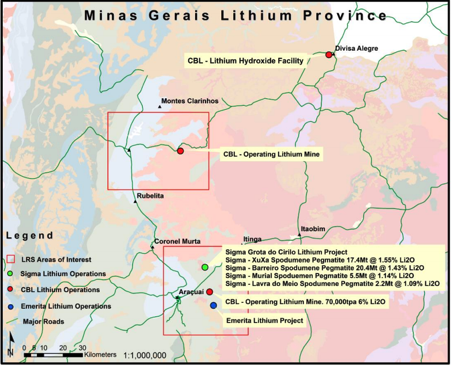 Based on the Feasibility Study Report, the Commercial Production Plant will contemplate a capacity of 220,000 tonnes annually of battery-grade “green” lithium concentrate and Sigma will be amongst the lowest-cost producers of lithium concentrate globally.

The concentrate is then transformed into industrial grade lithium hydroxide, a commodity that is forecast to grow in demand given it possesses the qualities required for battery production.

This is a market where LRS sees immense opportunities, particularly given there are limited global supplies of lithium hydroxide.

Indeed, CBL is one of the few companies worldwide with the integrated lithium ore-concentrate-compound technology.

Part of CBL’s underground spodumene mining operation can be seen on the left, while the picture on the right shows an overhead view of the lithium hydroxide facility.

Given LRS’s close proximity to this activity, the outlook is positive, however it’s not the only work LRS is carrying out. There are, in fact, more catalysts to come at its Catamarca Project in Argentina.

Latin Resources will commence work with JV partner Integra Capital at its lithium sites in the Province of Catamarca, with a view to delivering a Maiden JORC Resource.

With COVID restrictions now lifted, the JV will spend up to US$1 million (AU$1.4 million) in the next quarter as part of an aggressive exploration program on the Catamarca concessions.

The joint venture focus will turn to project development, including feasibility, engineering and metallurgy studies to produce a lithium spodumene concentrate.

Under the JV, Latin will be free-carried through initial exploration with financing for the construction of the processing plant to be in line with percentage ownership between Integra and Latin of the project partnership at the time of the Final Investment Decision.

LRS’s diversification will come to the fore in the coming months as we not only expect further Halloysite results out of WA, but drilling to commence at its Brazilian lithium assets.

With drilling to occur in Q2, we should see plenty of newsflow from the company as it looks to give shareholders a comprehensive chance of success.