First Look at GGE Helium Resource. How does it stack up?

In October we announced our Pick of the Year Grand Gulf Energy (ASX:GGE) - Catalyst Hunter’s biggest ever investment.

The reason for our investment was GGE’s recent acquisition of a US helium project in the heart of the world’s most prolific helium producing region.

Today GGE confirmed a large prospective helium resource at that project and stated that maiden drilling is on track for late next quarter.

We like that GGE is drilling in just a few months time - drilling events generally draw the attention of the wider market and see rapid share price appreciation in the lead up.

In November, we discussed how GGE had expanded their acreage by 16% to a total lease holding of 27,303 acres — an important step ahead of the estimation of the maiden prospective helium resource. Naturally, a larger acreage would lead to a larger resource.

GGE is earning a 75% interest in the project via an earn-in agreement with Valence, a joint venture holding company.

So from the 7.4BCF prospective resource, 5.6BCF will be net to GGE - assuming full earn in.

We did some quick back of the envelope calculations for the prospective resource and what it could mean for the “in ground” value for GGE.

Of course this is only a prospective resource we are talking about - there is less confidence in this number as the project is in its early stage and hasn't been drill tested yet.

We would expect the resource size to reduce as exploration drilling continues and some of the ‘estimates’ convert into contingent resources and reserves. Plus exploration and development costs have not been considered.

In any case, a “multi-billion dollar in ground value” is a nice place to start heading into the drilling of the first well.

The prospective resource gives GGE a target to chase and is the first step towards being able to commercialise its helium project.

With a prospective resource secured, the next step is for GGE to get a drill rig on-site and really test the project's potential.

Today’s announcement also confirmed that GGE was well advanced with drilling permitting and is expecting to drill the first well in late Q1 2022 - roughly three months from now.

With existing infrastructure in place, and assuming the drilling programs are a success, GGE could skip the proving up stage of the resource definition phase and quickly put it’s project into production.

With GGE currently trading at almost half the market cap of its nearest ASX listed peer, we expect the upcoming drilling program to be the catalyst that leads to a re-rating of the share price.

When announcing GGE as our 2020 Pick of The Year we said we wanted to see a maiden prospective resource announced before Christmas.

🔲 Resource on Current Leases [before Christmas]

With the maiden resource now delivered, GGE will have a few extra weeks by the year’s end to focus its efforts on moving closer to a drilling program.

Just like any other gas exploration project, a “prospective resource” is the first step toward making a discovery. Think of it as an estimate of what the company thinks could be in the ground.

Generally with gas exploration projects a company would need to drill the prospects and upgrade the resource from prospective to contingent and then from contingent to a final reserve figure.

So it would be easy to think GGE has a lot of work to do before it can commercialise this “prospective resource” but it’s important to remember where GGE’s projects are.

GGE’s helium project is located in a specific part of the US dubbed “the Saudi Arabia of Helium” due to the number of large producing helium companies and helium production plants here.

In fact a pipeline runs through GGE’s “Area of Mutual Interest”, directly to the Paradox Resources owned helium plant.

With this in mind, we are confident that GGE is in the right place to be able to quickly put into production any successful discovery.

Should GGE’s drilling program confirm a helium reservoir with commercial flow rates, it could quickly tie the well in via a pipeline agreement and start selling into local markets. 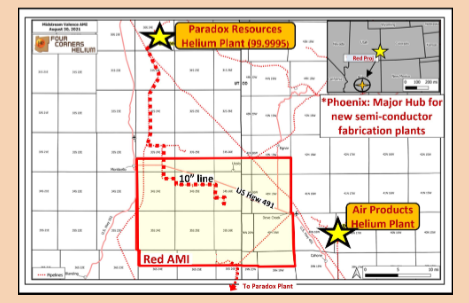 This is completely different to a mining project. There is no open-pit mine that needs to be stripped back, there is no shipping port that needs to be built, GGE just has to get drilling done, confirm commercially flow-rates of helium & then negotiate a pipeline agreement.

All of this could lead to GGE skipping the “proving up” stage of the resource and just go from drilling straight into production.

GGE has the lowest market cap of its ASX helium peers:

At present there are only 3 pure play helium stocks on the ASX.

The first of these is Blue Star Helium - currently capped at $79.5M and is looking for helium in Colorado, USA. In this state, a lot of the leases sit on Federal land.

In our last note we touched on the importance of GGE’s leases in Utah sitting on freehold land as opposed to Federal land because of the complex business agreement overlays that are associated with Federal land.

With leases on freehold land, GGE has much less bureaucratic red tape to overcome compared to a company like Blue Star, whose leases are on Federal Land.

GGE can secure permitting for exploration, pipelines and future developments quicker and on much simpler terms.

GGE also has 190km of 2D Seismic already acquired and re-processed. So far the data points to a lot of similarities between the Doe Canyon Helium Field (8 miles to the west of GGE’s assets) which is producing 18mmcf/day of raw gas with average helium grades of ~0.5%.

Historic oil and gas wells drilled in the 1950-60s on GGE’s project showed up to 0.4% helium, but no further testing was done since the drillers were primarily looking for oil.

Again, we think this is another advantage GGE has over Blue Star. 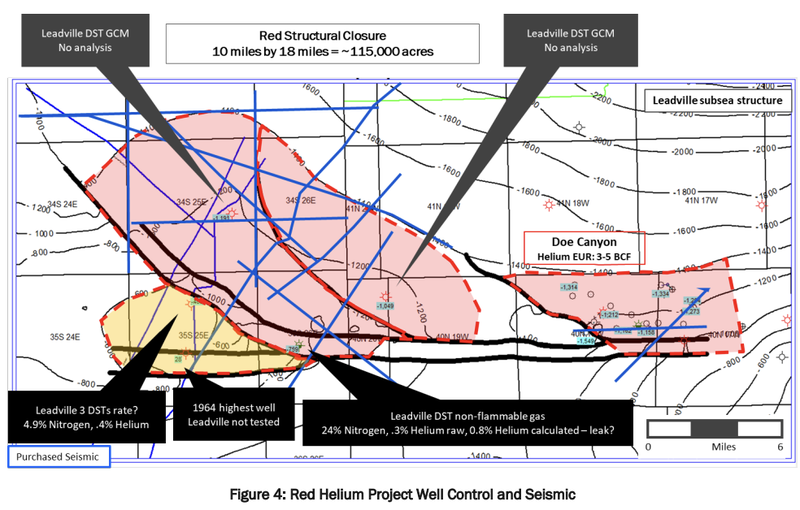 GGE also has the highest concentration of resource with 1BCF prospective resource for every 3,656 Acres leased.

This compares favourably with Blue Star who have 1BCF prospective resource for every 14,116 Acres leased.

The second and much further advanced helium stock is Renergen Ltd, which holds one of the only onshore petroleum production rights in South Africa.

Renergen Ltd is essentially building an industry from the ground up - the latest company presentation indicates a US$800m CAPEX figure to get their helium project off the ground.

The key advantage GGE has over Renergen comes from the fact that GGE’s assets sit in the “Saudi Arabia of helium” in the US - a major advantage over Renergen’s African location. .

Given all of the existing infrastructure in the region, GGE won't have to commit hundreds of millions of dollars to develop infrastructure, providing its project with a fast pathway to production. 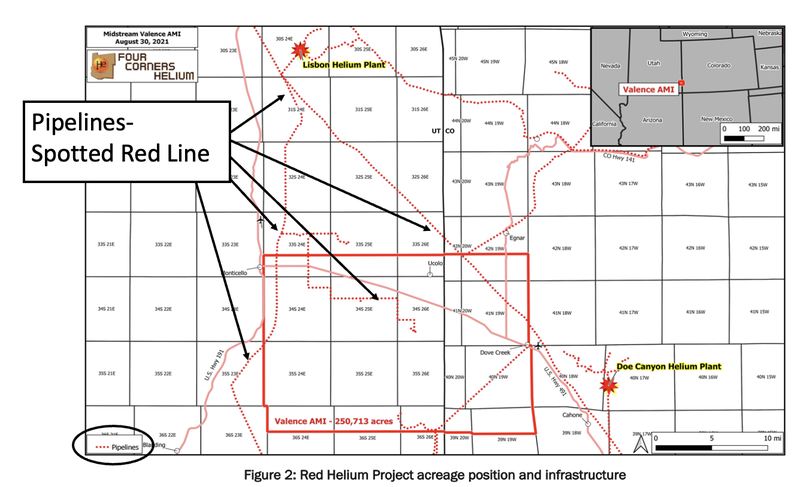 Let's summarise some of the key differences:

Essentially, as GGE increases the size of their lease holdings we expect the prospective resource to increase relatively quickly.

All of these differences considered GGE has the lowest market cap of all three of these pure play ASX helium stocks.

We think that eventually the market will catch onto the differences and re-rate GGE accordingly.

Blue Star announced its acquisition of its helium assets in the USA in November 2019. It has since gone on a share price run from 0.5c all the way up to where it is now at 5.1c - an impressive 10x return in under 24 months:

GGE made it’s helium acquisition in September this year - only four months ago.

To finance the acquisition, GGE raised $950k @ 1c. Within three months the share price ran to a high of ~5c - an almost 5x return for investors who participated in the capital raise.

Naturally when a big move like this happens in a short-period of time, investors look to lock-in some profits - and that creates some “churn” in the share price.

Considering the current broader sentiment in the market, we think GGE is holding up well above the placement price. We do expect to see some consolidation happen before a sustained move higher.

With a prospective resource now announced and its maiden drilling program only a few months away, we hope GGE’s share price will perform similarly to its peers over the next 18-24 months.

We made some early stage investments in GGE at 1c at the placement, when the market cap was significantly lower than all of its peers. We have since added to our investment at 3c.

Given GGE’s large discount to its peers, we think the market will eventually catch up with the potential at its helium projects.

Typically these large re-rates happen over a longer period of time, similarly to its peers we expect this to happen in the 18-24 months prior to the helium assets being acquired (Sept-2021).

GGE’s project is still at the prospective stage.

There is a risk that drilling returns no helium and the project is considered stranded. And assuming GGE does make a helium discovery, if the flow rates are too low or the helium recovery rates are not high-enough then the project could be considered uneconomic.

GGE, being an early stage explorer, is also reliant on markets to be willing to finance drilling programs. A change in market conditions could lead to potential financing issues.

What’s next for GGE & what do we want to see?

We recently launched a project we have been working on for a while called “Investment Memos”.

Our idea behind the project was for the milestones and developments of a company to be easily comparable to our initial investment thesis.

You can check out our GGE investment memo here.

Below is a breakdown of the things we want GGE to achieve in the short-medium term:

Objective 2: Expand the resource through leasing

✅ Resource on Current Leases [before Christmas]: Today GGE announced the initial gas resource on the current leases. This forms a baseline for resource expansion.

🔲 Offtake Agreement [6 months] - GGE has said an offtake negotiations are underway. In our experience, offtake negotiates can take longer than expected - a good result would be to see this within 12 months.

🔲 Pipeline deal secured [End of 2022] - Again these kinds of deals can take longer than expected, we would be happy for this to occur by the end of 2022, and very impressed if it comes earlier