Announcing our 2021 Pick of the Year

Semiconductors are used to make the computer chips that power the modern world - there are millions of products that now rely on them to function - cars, washing machines, smartphones, military equipment and more.

Some media outlets are saying that semiconductors “are the new oil”... in that countries have developed an addiction to it, and have no security of supply - relying on potentially unfriendly countries for their fix.

The world is currently experiencing a global semiconductor shortage and now countries are rushing to build their own semiconductor factories to reduce reliance on imports from Taiwan and other Asian countries.

This is where helium comes in - helium is a critical component in the manufacture of semiconductors - as well as host of other high tech applications.

There is virtually no domestic helium production in China - the global giant is seeking to secure a supply from somewhere.

The USA will need to secure its own supply to feed the semiconductor factories it is planning to build within its own borders.

Both the US and China want to keep Taiwan’s semiconductor supply freely flowing - however tension between the two superpowers is brewing...

We believe the retreat from globalism and a move to ‘localism’ and local supply chain is going to create massive investment opportunities this decade.

Here at Catalyst Hunter, we have just made our biggest investment ever - betting on a USA based helium explorer that is planning to drill its first well in March 2022.

GGE recently acquired a helium exploration and development project based in Utah in the US.

GGE is one of the very few helium plays listed on the ASX and we think that the helium market will be buoyant up to at least mid 2025, with helium prices increasing as consumption use cases grow.

We like the economics of the project, as well as the straightforward pathway to helium exploration and development in the USA - similar to oil exploration.

GGE plans to drill its first helium well in March 2022. As with most drilling, We expect a share price run up in the lead up to drill results as investors speculate on a positive result.

Semiconductors are a key element in computer chips which are used in household electronics (laptops, phones, etc...), electric vehicles and military technology.

For those not familiar with the location of U.S States, Arizona is right next door to Utah - the State where GGE’s helium project is located.

Today we are going to provide the 10 reasons we are invested in GGE, which we will follow up with deeper analysis and commentary as the company executes on its business plan.

The 10 reasons why we invested in GGE

1. Location, Location, Location - GGE’s helium project is located amongst a number of large producing helium companies and helium production plants in a region dubbed “the Saudi Arabia of Helium”. Utah is an exploration friendly state which provides an easy permitting pathway to drilling for GGE.

2. Helium’s use in semiconductor production - There is a current global shortage of semiconductors. Helium is used as a stabilising agent in semiconductor manufacturing. We think that helium will play a key role in this expanding industry, as demand grows.

3. Semiconductor wars to drive demand - Both America and China will be looking to secure key supply chain materials for semiconductors to advance their national industrial policies.

USA in particular wants to localise supply, with two of the largest semiconductor manufacturing companies (TMCS and Intel) committed to spending over US$30 billion to build production facilities in Arizona, USA.

4. Performance milestones to drive drilling quickly - The way that the deal for the project is structured is that GGE will need to meet certain timelines to ‘earn in’ a greater percentage of the project.

Currently GGE owns 25% of the project, however with each new well drilled they will earn a greater % of the project - this starts with the first drill expected in March.

We like these types of deals because it holds management accountable to timeframes (more on this later).

5. Only one other helium explorer on ASX - Blue Star Helium, which is already capped at $83M. There is also UK listed Helium ONE that was capped at $250M prior to their unsuccessful drill a couple of months ago. GGE is capped at ~$40M.

6. Other helium uses - There are a multitude of other uses for helium including in the medical sector for MRI machines, aerospace travel, leak detection and of course for party balloons.

We think that mature markets (party balloons and leak detection) provide a strong baseline demand for the gas, with demand growth to come through semiconductor advancements, medical technologies and aerospace travel.

7. Helium prices rising - The price of helium has seen a rapid expansion in both the spot public auctions and longer term negotiated private contracts. 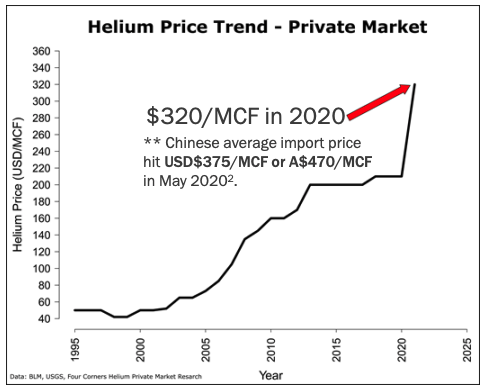 8. Analog fields - The nearby Doe Canyon helium field is regarded as “analogous” to GGE’s project. It currently produces 18 million cubic feet per day (mmcfpd) of raw gas, at an average grade of 0.5% helium. If we can see flow rates from GGE’s well of say 0.4% helium at even 10mmcfpd flow of raw gas stream we would consider this a very good result.

9. Pathway to monetisation - The project is located 8 miles from the Doe Canyon Helium Plant owned and operated by Air Products Inc (market cap US$60 billion).

There are only 17 helium plants in the world and 4 of them in the immediate vicinity of the GGE. There are also pipeline facilities nearby which lead directly to the local helium production plants.

These factors all lead to a smooth path to commercialisation. What we need GGE to do is prove they have commercial helium underground - obviously the drilling is the risk event, we think there will be a run up into the result.

Back in 2020 we originally looked at the “other” helium company on the ASX, called Blue Star Helium (ASX:BNL)

BNL has had a solid run up over the last 18 months and is capped almost double of GGE.

We are hoping that once GGE starts releasing news and progress to the market they will start catching up to a similar market cap to Blue Star Helium.

While targeting less % helium, GGE is expecting better flow rates from its deeper wells (more pressure) than BNL, who is drilling shallow wells in neighboring Colorado.

BNL has been plagued with permitting delays under the “non-exploration friendly” Colorado government but has STILL delivered a great price share price run for long term holders, so we anticipate that GGE’s operations in permitting friendly Utah should deliver faster progress than BNL.

Here is a side by side comparison - we like GGE because its deeper wells will provide the pressure to deliver the required flow rates AND the permitting is much easier.

NOTE: at the time of writing this, BNL just went into a trading halt to raise $15M - BNL is capped at $83M. 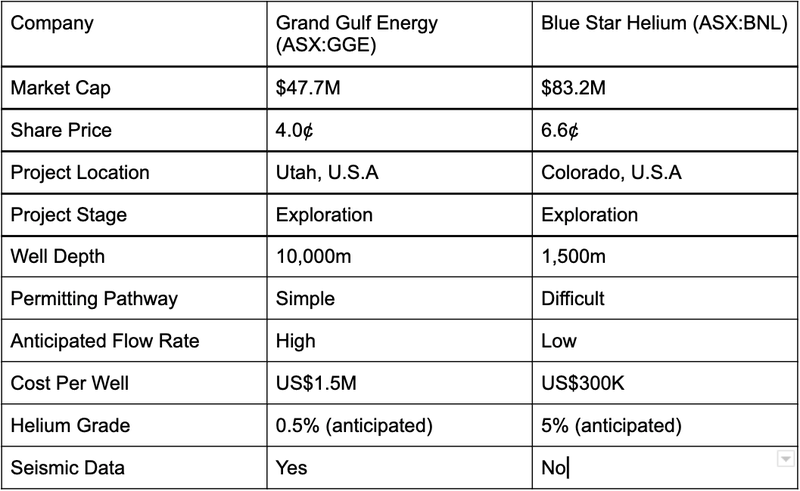 Back on the 2nd September, GGE acquired 100% of “Kessel Resources”, a Utah focused helium company.

We were shareholders in the private company Kessel Resources and have been following this helium project for over 6 months now, and increasing our position over that time.

As part of the deal, we like that GGE is incentivised to move fast to drill its helium wells - in order to earn 75% of the project it must achieve the following milestones:

GGE recently raised $3.3M at 1c per share and is well funded for the first drill which is expected in March. We invested in this capital raise. We also acquired more GGE shares at ~ 3c.

What is our investment plan?

Our plan is to hold a position in GGE through the three well program.

We will aim to sell ~20% of our holding during the share price run up to the March 2022 drilling results to partially de-risk our position. After those drill results are analysed - expected to happen in the middle of 2022, we will reassess our investment plan based on the new information.

Here is what we want to see GGE deliver

We are launching a new Catalyst Hunter portfolio model, where instead of chasing short term share price catalysts over 6 months we now are taking larger, long term positions in the companies we cover (2 to 3 years).

We will clearly set our expectations for each new investment we make and closely follow the story and management team’s execution during that time - this is our speciality and more inline with our other portfolios at Next Investors, Finfeed and Wise-Owl.

To start of with our 2021 Pick of the Year GGE, here is what we expect to see from the company:

A good result for us would be 0.4% helium concentration in the raw gas stream at a flow rate of 10mmcfpd of raw gas (we will find out grade and flow rate 2 weeks after the well is complete).

Anything above 0.4% helium in the raw gas stream or above 10mmpcfd would be excellent.

🔲 Offtake Agreement [6 months] - GGE has said an offtake negotiations are underway. In our experience, offtake negotiates can take longer than expected - a good result would be to see this within 12 months.

🔲 Pipeline deal secured [End of 2022] - Again these kinds of deals can take longer than expected, we would be happy for this to occur by the end of 2022, and very impressed if it comes earlier

🔲 Resource on Current Leases [before Christmas] - we expect, based on the GGE company presentation, to see this by the end of this year

🔲Additional Leasing - building acreage to build a bigger gas resource - these are a bonuses and we don’t have a timeframe or expectation when they will occur.

What are the Risks?

Investing in early stage exploration companies is risky, and while we feel our investments are set up for success, a lot of unexpected things can go wrong. So make sure you have a strategy and only invest what you can afford to lose.

Disclosure: The authors of this article and owners of Catalyst Hunter, S3 Consortium Pty Ltd, and associated entities, own 49,940,826 GGE shares.

HELIUM SEMICONDUCTOR PICK OF THE YEAR