Disclosure: The authors of this article and owners of Next Investors, S3 Consortium Pty Ltd, and associated entities, own 16,623,582 LNR shares and 3,500,000 LNR Options at the time of publication. S3 Consortium Pty Ltd has been engaged by LNR to share our commentary and opinion on the progress of our Investment in LNR over time.

Drilling is targeting high-grade rare earth mineralisation in the Gascoyne region of WA, with the aim of making a new discovery.

We Invested in LNR hoping it can follow its two rare earths neighbours' success.

LNR’s biggest neighbour, Hastings Technology Metals is destined to be the second largest rare earths producer on the ASX.

Dreadnought Resources, another of LNR’s neighbours, has seen its market cap re-rate since it started drilling and made a major high-grade rare earths discovery less than 35km from LNR.

LNR discovers and proves a rare earths deposit significant enough to become an acquisition target for one of its bigger neighbours Dreadnought or Hastings - or LNR becomes part of a consolidation play for all three companies.

NOTE: The above is what we think the ultimate success scenario looks like for this particular Investment over the long term (3+ years). There is a lot of work to be done by the company to get to this outcome and obvious risks which need to be considered, some of which we list in our LNR Investment Memo. 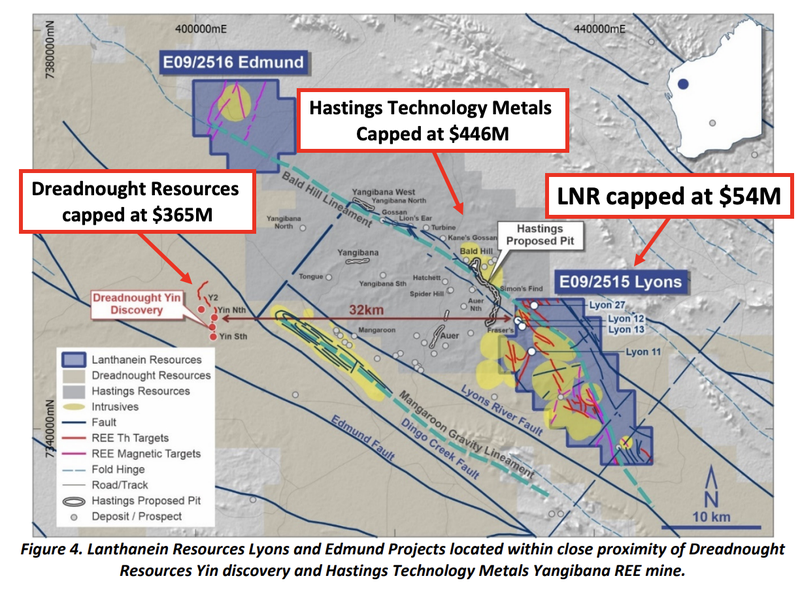 Right now, LNR is drill testing the geology that has delivered exceptional high-grade rare earth rock chips (as high as 8.01%) at outcropping ironstones over >2.5km strike.

Here’s the exploration pathway, and how LNR has followed it: 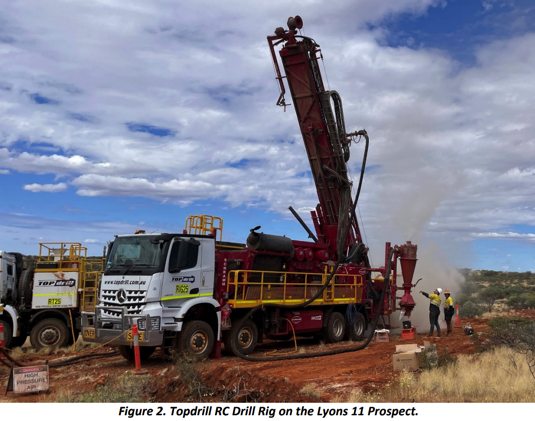 As mentioned above, LNR is capped at only $54M, compared to its two neighbours - Hastings capped at $446M and Dreadnought at $365M.

We hope LNR can emulate the success of its neighbours and become the third major player in this region with a rare earths discovery of its own.

We have seen it many times before where a company (oftentimes the most advanced in a region) is backed by someone with deep pockets and goes on to acquire smaller players in the region.

Andrew Forrest recently stepped up and backed Hastings — which has the most advanced rare earths project in the region — with $150M to take a stake in a Canadian-listed magnet maker. This will allow Hastings to integrate its rare earth mine into a vertical supply chain providing high quality magnets to European car makers.

Other big rare earths players, such as the $8BN Lynas Rare Earths, might just be taking notice of what’s unfolding in the Gascoyne too.

But talk of M&A activity is a little bit early for LNR — first it must drill and hopefully find something of value... which we will find out in the next couple of months.

To see how LNR got to the point of its first ever drilling program check out our LNR “Progress Tracker” where we track LNR’s project from acquisition through to a hopeful discovery. 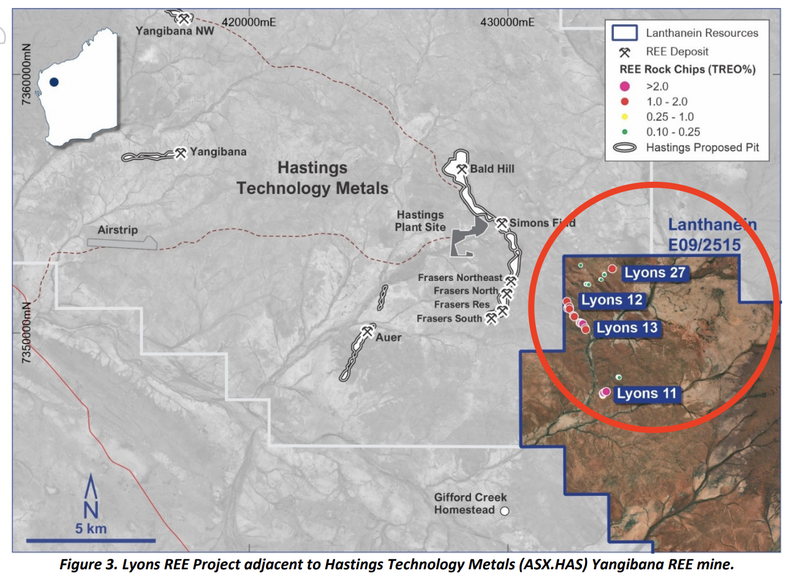 The particular focus of the program will be the outcroppings of ironstones where LNR previously confirmed rare earths mineralisation with grades of up to ~8.01% total rare earths oxide (TREO).

LNR will be targeting these outcropping ironstones, to see if the mineralisation extends at depth, whilst at the same time testing the carbonatite structures that the company has interpreted to extend deep underground.

If LNR can confirm rare earths mineralisation in both the ironstone and carbonatite structures then it will have returned similar drilling results to its neighbours Hasting’s and Dreadnought.

In a previous note we set our expectations for what we want to see from LNR’s drilling program:

After reviewing the drilling results that were enough for LNR’s neighbours Dreadnought Resources and Hastings Technology Metals to declare discoveries, we have set the following expectations for this round of drilling:

We also note that LNR confirmed today that it has already lodged an additional Program of Works (PoW) application for a follow up drilling program.

This should mean that if a discovery is made, then LNR can go back in and continue drilling out the project to try and better understand the size/scale potential of what we are hoping is a discovery.

How does LNR stack up against its much bigger neighbours?

In our last note, we did a deep dive on the valuation differences between LNR and its much larger capped neighbours.

The main difference between them is:

LNR, on the other hand, has spent most of the year refining its drilling targets, ranking the ones with the highest probability for a successful discovery in preparation for the current drilling program.

A quick recap of where LNR’s neighbours are at...

In July, Dreadnought drilled into those ironstones and confirmed a new discovery with intercepts as high as ~35m and grading up to 6.05%.

Earlier this week, Dreadnought put out another set of good assay results and confirmed that a new discovery had been made, this time even closer to LNR’s ground. 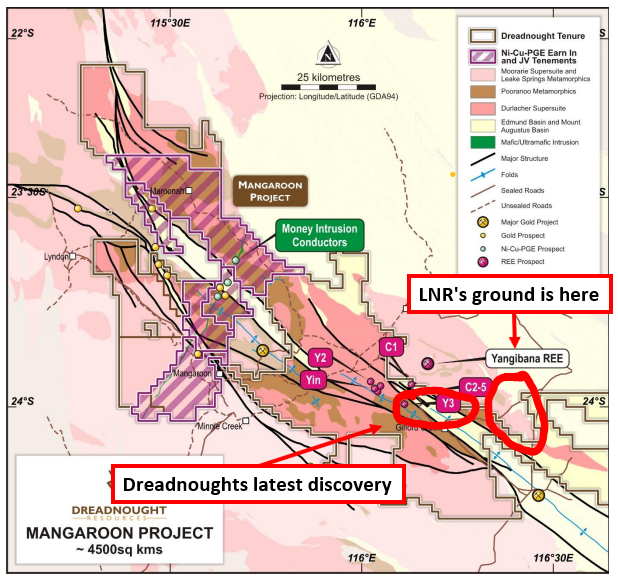 Since its July discovery, Dreadnought's share price has gone from 4c to now trade around ~12c per share, now trading with a market cap of $365M - almost 7x LNR’s current market cap.

Similar to Dreadnought, LNR has outcropping ironstones and is now drilling these targets — we hope it can emulate its neighbours' success and make a new discovery.

Hastings’ project sits right on the border of LNR’s tenements and is dubbed “Australia’s next rare earths mine”.

Hastings’ advanced project has received non-binding financing for its project from the Australian government of $140M and, more recently, has attracted the attention of Australian mining billionaire and head honcho at Fortescue Metals, Andrew “Twiggy” Forrest.

But just like all big companies, Hastings’ origins are relatively humble.

Hastings — in almost identical fashion to LNR and Dreadnought — had ground full of ironstone outcroppings where rock chips were returning grades as high as ~26% TREO.

After drilling those outcropping ironstones, Hastings went on to declare its Yangibana project a new rare earths discovery later that year in July 2014.

Hastings' discovery came off the back of intercepts measuring between 4m-8m with TREO grades up to 3.44%.

As we mentioned above, LNR is following the same playbook that its neighbours used to elevate them from small explorers to their current market caps in the hundreds of millions of dollars.

We are hoping LNR, with its first drilling program, can make a discovery and ta its market cap from its current $54M to levels more in line with its neighbours. 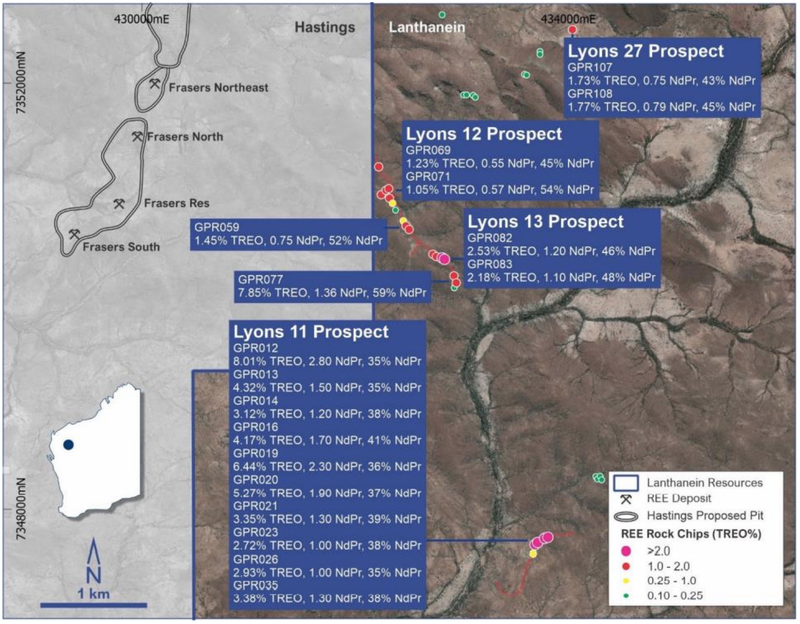 Results from the drilling program 🔄

With drilling now underway the next major catalyst for LNR will be the initial drilling results.

As with all drilling programs, the assay results will be the ultimate tell of whether the company has made a new discovery.

After reviewing the drilling results that were enough for LNR’s neighbours Dreadnought Resources and Hastings Technology Metals to declare discoveries, we have set the following expectations for this round of drilling:

Very rarely do junior explorers make discoveries off the back of their first drilling program, so as our base case we aren’t anticipating a new discovery.

Even in the bear case and no mineralisation is hit, LNR still has multiple targets to drill test.

Below is a map of where the other prospects sit. 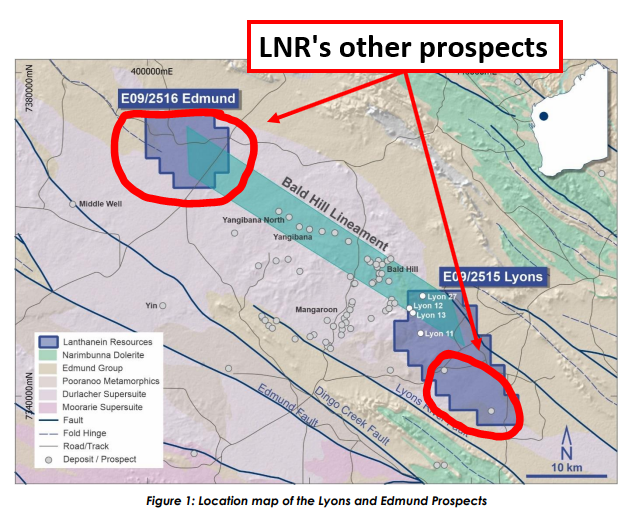 What could go wrong from here?

The big risk now for LNR is ‘exploration risk’.

Something we continue to stress with our exploration Investments is that there is never any guarantee that an explorer will make a discovery.

Target generation works can throw up interesting targets, and the drilling program may look de-risked to a certain extent, but we always go into these maiden drilling programs with our expectations set relatively low.

Rarely do junior explorers make a new discovery with their first drilling program.

Our expectation is generally to see them learn enough from the first drilling program to warrant going back in and doing more exploration.

This is something we have flagged in our 2022 LNR Investment Memo. To see all of the risks we have listed, click on the image below: 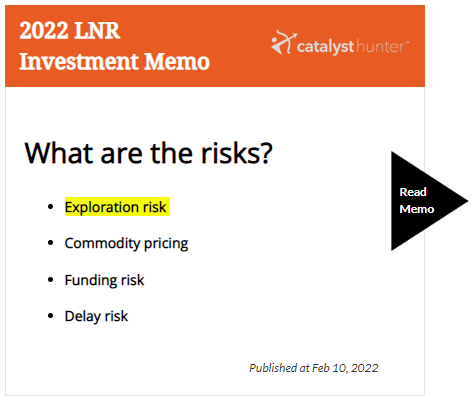 Below is our 2022 Investment Memo for LNR where you can find a short, high level summary of our reasons for investing.

The ultimate purpose of the Investment Memo is to track the progress of LNR throughout 2022 using the objectives set in the memo as our benchmark.

Disclosure: The authors of this article and owners of Next Investors, S3 Consortium Pty Ltd, and associated entities, own 16,623,582 LNR shares and 3,500,000 LNR Options at the time of publication. S3 Consortium Pty Ltd has been engaged by LNR to share our commentary and opinion on the progress of our Investment in LNR over time.