The timing could scarcely be better.

Following up on comparative magnetic imagery results, VIC is planning to drill for high-grade cobalt and scandium mineralisation within its soon-to-be formalised Husky and Malamute project areas in NSW.

The crucial price catalyst looming over the horizon, is likely to come in the form of cobalt/scandium drilling and in parallel, further improvements in metals prices globally.

VIC has signed a binding agreement to acquire 100% of the issued capital of Cobalt Prospecting (CPPL), a company which owns four high-quality, cobalt project areas in NSW and WA.

Crucially for VIC, it doesn’t need to re-comply with Chapters 1 and 2 of the ASX Listing Rules as a condition of the acquisition.

This news is significant because it adds further commercial potential, to a company already making good headway in metals, but currently remains capped at just A$7.8 million.

It should be noted, however, that VIC is an early stage company and investors should seek professional financial advice if considering this stock for their portfolio.

At its soon to be acquired ground, VIC is directly adjacent to proven cobalt companies such as Clean Teq (ASX:CLQ) who already have a 109Mt at 0.1% Co Resource & 28.2Mt @ 419ppm Scandium (Sc) confirmed.

Also nearby is Australia Mines (ASX:AUZ), with a defined scandium Resource of 3.14Mt @434ppm.

CLQ is currently capped at almost $1 billion and AUZ is capped at $240M – indicating the potential value in this area if VIC can identify some similar style mineralisation in the region.

As you can see below – VIC is directly next door to AUZ’s ground – and close to CLQ: 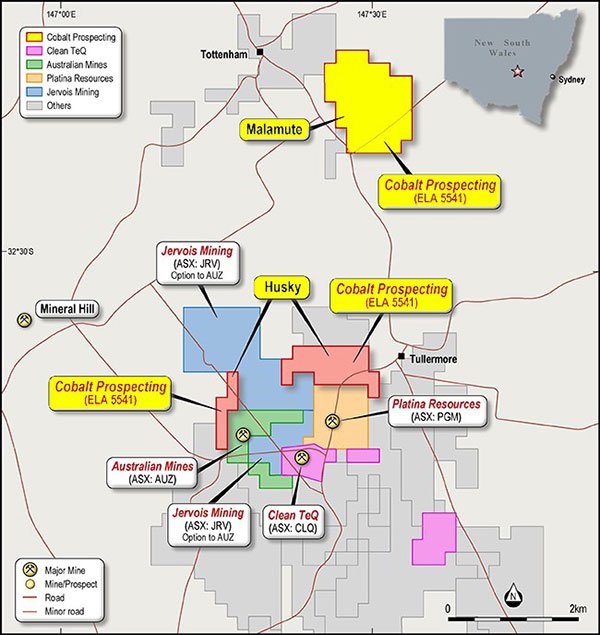 Furthermore, VIC has officially confirmed it shares a geological intrusion ‘anomaly’ with PGM’s Owendale deposit to the north, and, AUZ’s Flemington deposit to the west, as indicated in yellow below: 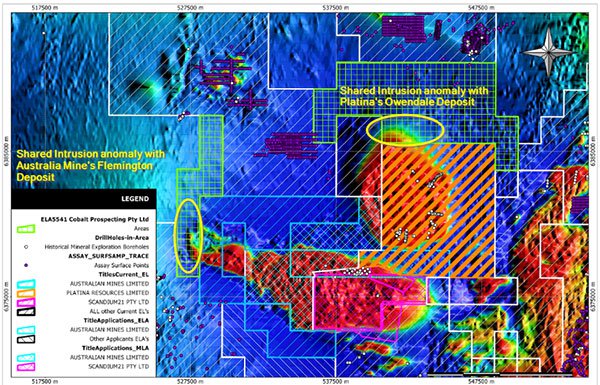 VIC’s Malamute tenure likely contains a geological analogue to CLQ, AUZ and PGM’s deposits given their close proximity and similar geological features recorded by all explorers in their respective exploration programmes.

As there are similar geological traits exposed by historic drilling, geological mapping and geophysical signatures, VIC stands in an excellent position given its current A$7.4 million market valuation.

· Mineralisation is open in multiple directions

· Husky is within 5km of CLQ’s Project.

These factors indicate VIC’s Husky tenure is well-placed to benefit from the geological results already discovered by its peers CLQ, PGM and AUZ.

Tabulated below, are the total resources currently held by VIC’s peers.

The Malamute tenure likely contains a geological analogue to CLQ, AUZ and PGM’s deposits, as there are similar geological traits exposed by historic drilling, geological mapping and geophysical signature.

The close geological correlations once investigated further, could potentially translate into similar price catalysts for VIC, as there have been for AUZ in its own exploration path previously. VIC remains at an earlier stage of development compared to its local neighbours in NSW, but has similar tenure and is well-funded to make explorational progress. 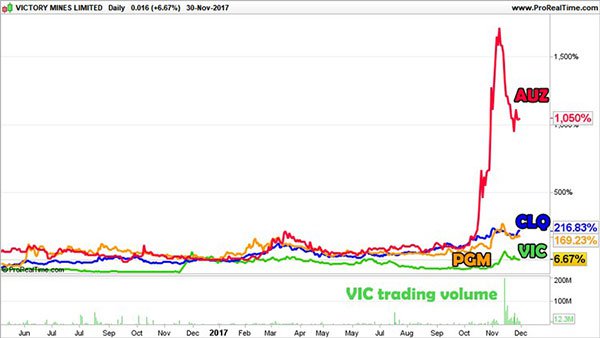 VIC has raised an additional $2 million through the issue of 300 million new shares at a price of $0.07 per share. The entirety of the funding will be deployed towards acquiring VIC’s new cobalt tenure and expediting exploration activities.

Zinc and cobalt prices are making their sequential moves higher on the back of waning supplies and emerging demand globally.

Cobalt has become one of the most high-margin commodities in the world due to the demand/supply factors underpinning its production.

Cobalt prices have surged over the last year, driven by demand from battery manufacturers and electric vehicle makers. Supply of the commodity is susceptible to disruption, exposing a vulnerability in the lithium-ion supply chain and underpinning a likely period of price growth in cobalt’s future. 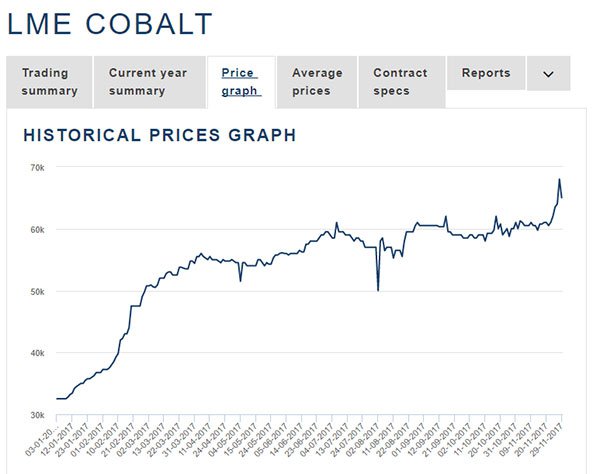 Cobalt has emerged as a star metal for investors this year, with cobalt seeing sustained price growth from around $15/lb in late 2016 to more than $27/lb today.

So too with zinc prices and pretty much all other base metals such as copper and nickel — metals are back in vogue, especially in territories like Australia with a rich commodities infrastructure. 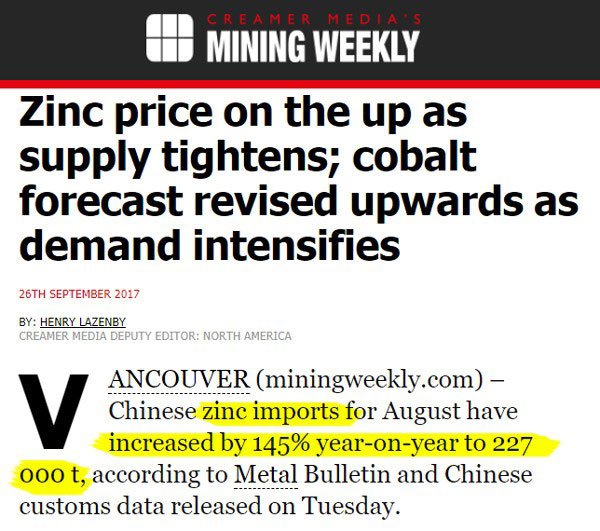 From a strategic perspective, VIC has chosen the right time to acquire Cobalt Prospecting and re-orient its focus towards defining a JORC-compliant cobalt and scandium resource, as soon as practically possible.

According to analyst’s forecasts, a sustained demand boost for cobalt on the back of electric vehicles (EVs) (and other industrial applications) is well under way and expected to carve out a new sector in its own right over the coming decade.

Lithium is empowering a new dawn of energy creation, storage and consumption with cobalt playing an essential role in the lithium-ion battery. 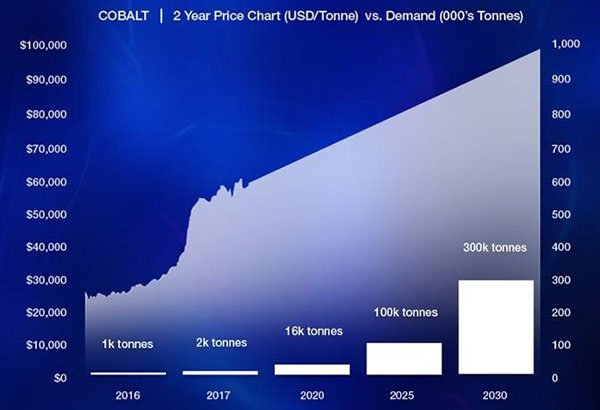 According to Baystreet, cobalt demand could be about to surge from 2,000 tonnes annually today to over 300,000 tonnes in 2030 — representing a circa 15,000% increase over the coming decade.

Although, commodity prices do fluctuate, so don’t base you investment decision on these prices alone and seek professional financial advice for further information.

This demand growth is primarily a result of rapidly developing lithium-ion battery technologies, around three-quarters of which are set to use cobalt chemicals by 2020.

Such batteries are used in electronics ranging from grid-level energy storage systems to smartphones and tablets, but by far the fastest-growing source of demand is the EV industry.

Active exploration in amidst growing resource prices is a good place to be for VIC. VIC has considerable exploration upside within its reach for high-grade cobalt and scandium mineralisation across its newly-acquired assets.

Without a JORC-compliant Resource, VIC’s estimates are conceptual.

However, evaluating peers operating in close proximity provides a good leading indicator into how VIC will fare over the coming months.

VIC’s and AUZ’s/PGM’s deposits could be hosted within the same magnetic anomaly with recent drilling results propelling VIC’s peers to doubling their cobalt, and tripling their scandium mineralisation footprints.

Importantly, the results showed the mineralisation was open in multiple directions — a hugely positive upside indicator for VIC’s Husky prospect, at this early stage just as VIC starts heading towards drilling.