Kingston Resources (ASX:KSN) will release its maiden JORC resource in November, which is expected to set a benchmark for exploration moving forward.

KSN recently merged with Canadian-listed WCB Resources (TSX-V:WCB), in a deal that gave it a multi-million ounce gold project in an underexplored corner of Papua New Guinea (PNG).

That project is the Misima project, which already comprises known mineralisation over seven kilometres of strike and a current NI 43-101 gold Resource of 2.3 million ounces.

N1 43-101 (National Instrument) is a Canadian mineral Resource classification scheme which is effectively the Canadian equivalent of JORC. The pending announcement of its JORC Resource complements the existing JORC 2004 Inferred Resource of almost 50,000 ounces at its Livingstone Gold Project in Western Australia.

The focus of this article, however, is on Misima.

With the WCB merger put away, KSN turned its focus to releasing its maiden Australian JORC resource at Misima and immediately commenced work including completing a JORC Resource, and re-establishing a field team to recommence geotechnical field work.

Importantly for KSN, historical data has enabled it to rapidly identify priority drill targets at Misima, with drilling approvals to be submitted early in the new year and the drill rig to be mobilised by Q2 2018.

A game changing merger for KSN

The significant exploration potential at Misima was too good to ignore for KSN when it first started merger talks with WCB Resources.

However, KSN remains a speculative stock and investors should seek professional financial advice if considering this stock for their portfolio.

Times have changed. Gold is up. And there is a place for a strategic ASX explorer to try to revive the mine and bring it back to its former glory.

Here’s a look at where Misima sits: 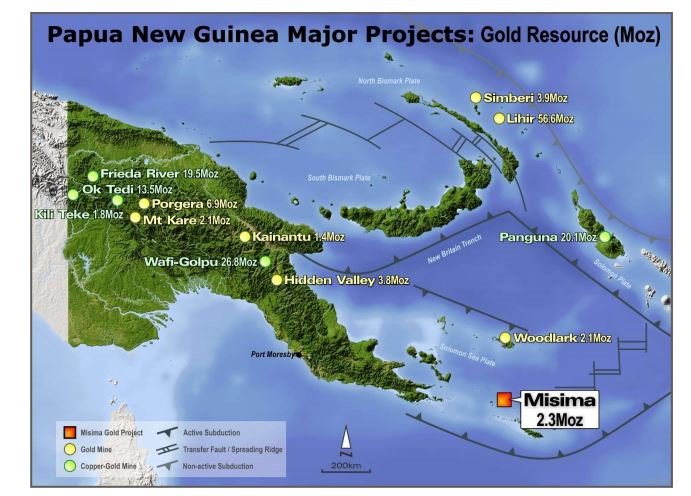 If you look at the numbers in the map above, you can see Misima is surrounded by giants and exists in a region with massive upside potential.

The benefit here for KSN, is that its project is in an underexplored area of this region, but Misima’s history also illustrates huge potential. This is effectively a long life and low cost gold mine, driven by low strip ratio and an industry-leading low cost milling operation.

In essence there is a great deal of upside for KSN here at it looks to build on its $17.8 million market cap.

The merger in a little more detail

KSN has assumed management of the Misima Project and major shareholders are supportive. This is a tightly held stock with the Top 10 owning 55% of the stock, with the $996.8 million capped Sandfire Resources NL (ASX:SFR) holding 11.4%.

KSN currently owns 49% of this project, with earn-in expenditure of A$1.9 million remaining to reach 70% ownership by 31st March 2019. With $3.1 million cash in the bank, KSN is funded to complete this earn-in.

There is one other player in the mix here: Misima’s JV partner PPC, which is owned by JX Nippon Metals and Mining (66%), and Mitsui Mining and Smelting (34%).

Here’s a look at the size of the resource post-merger: 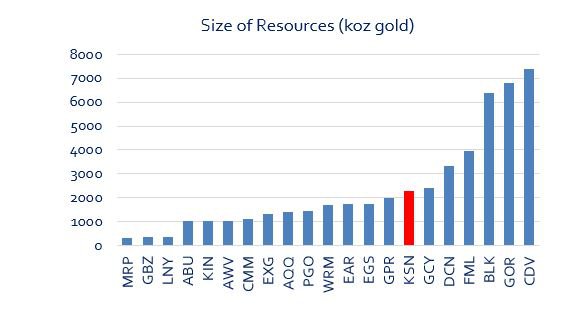 The Misima Project is located on Misima Island, 625 kilometres east of Port Moresby in the Solomon Sea.

As stated, it was a long life and low cost gold mine, driven by low strip ratios (low relative amounts of waste material) and a low cost milling operation, and also delivered 72% more gold than anticipated at the start of the operation.

A major reason for the low cost was the extremely soft, free-milling ore. This saw Misima milling up to 25% above nameplate during Placer (former owner) days, achieving 6.9 million tonnes per year, with life of mine recoveries of 91.7% gold and 48% silver.

The following table tracks Misima’s Placer stats from 1989 to 2004. 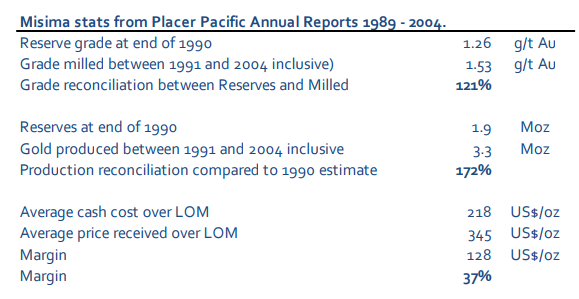 The mine was decommissioned in 2005, but KSN has a real chance now to not only revive the mine, but do it a time when gold is relatively strong.

The coming JORC resource announcement will also help its aims and don’t forget, Misima already has a N143-101 gold Resource of 2.3 million ounces.

Yet, this is still an early stage play and investors should seek professional financial advice if considering this stock for their portfolio.

The breakdown of the current resource looks like this:

Of course this is expected to change for the better when the JORC is announced.

Now with the merger complete, KSN has prioritised several areas for extensional exploration, including Umuna East, which shows mineralised structures on the southeast side of Umuna – up to 1.8km in strike with evidence of high grade, shallow mineralisation.

In addition, the Umuna area which currently contains the bulk of the known mineral resource and remains open along strike and down dip, with both shear-hosted and skarn mineralisation potential

The following map illustrates the upside: 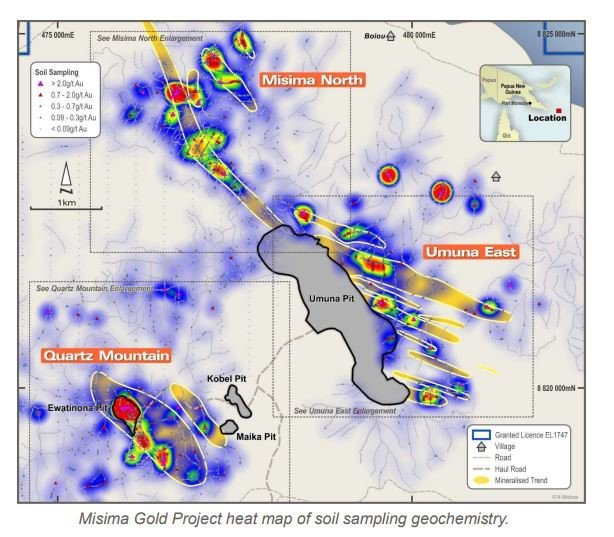 Now that the merger is complete and the JORC is imminent there is a lot of work to be done. Here’s the timeline: 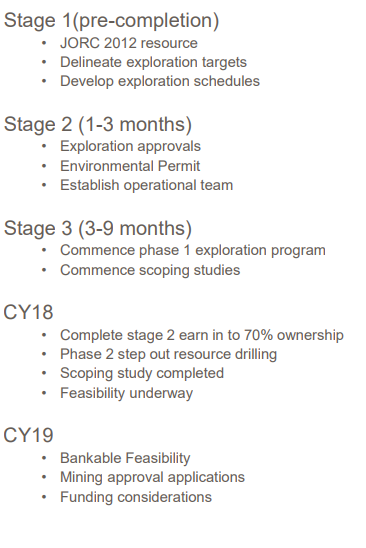 As you can see, it is a pretty full schedule, meaning the potential for an enormous amount of news to come.

First and foremost amongst the news will be the release of the JORC Resource.

This will be followed by a robust exploration program that could turn KSN into a far more advanced explorer with a range of projects that could fast track its progression.