The technology company has struck a partnership with a Canadian private equity firm, Slalom Capital, which has extensive interests in the Canadian cannabis sector, to accelerate sales of its anti-counterfeit product in the blossoming Canadian cannabis market.

ArcView Market Research reports that the Canadian legal cannabis market for medical patients has grown from 359,292 to roughly 29 million adults – each of whom became a potential cannabis consumer.

This is a large prospective market and partnering with a local, well-entrenched well-respected cannabis player is a smart move.

Given this partnership and DTZ’s ambition to expand its cannabis footprint, it may not be long before we see its first cannabis revenues coming in – potentially just months away.

This agreement presents an opportune time for investors to look more closely at DTZ, before the market catches on and sales contracts are signed.

DTZ has partnered with Slalom Capital Inc., which focuses on commercialising cannabis-related solutions. Slalom will pay a non-refundable one-time payment of A$296,000 within 60 days, to finalise the development of DTZ’s BioDotzTM technology on cannabis plants over the next nine months.

BioDotzTM are carbon-based markers for supply chain monitoring of plants of value.

Once this development is finalised, DTZ will grant Slalom exclusive rights to sell BioDotz in Canada, assuming annual wholesale targets are reached.

This means revenues for DTZ.

DTZ sees this as a logical step to commercialising its pending patent for the use of BioDotzTM as a direct taggant of cannabis and other high-value or restricted plants.

“Our Canadian Partner is very keen to ensure that finalisation of product is expedited, and to work with us as the exclusive distributor of our product in Canada.

“While regulation does vary from province to province in Canada, there are strict general rules regarding promotion, packaging, advertising and supply, which mean licenced producers in that country need to ensure they can track-and-trace cannabis to prevent illegal cannabis from being introduced into the legal market as well as legal cannabis from being diverted to the illegal market.”

The Canadian cannabis market is due for prodigious growth as it increases the number of licenced growers of both medicinal and recreational products, improves the retail location network, addresses supply issues and provides a better selection of non-flower products as the legitimate growing market takes hold.

This deal has the potential to accelerate not only the implementation of its technology in this market, but also DTZ’s revenue growth.

It is a good time to be in cannabis, particularly with a product that could revolutionise the industry by preventing legal products being counterfeited or sold illegally.

As briefly mentioned to above, DTZ has already entered the cannabis space when it partnered with licenced Israeli medicinal cannabis producer Seàch Medical Cannabis Group.

The news was covered by Computerworld ... 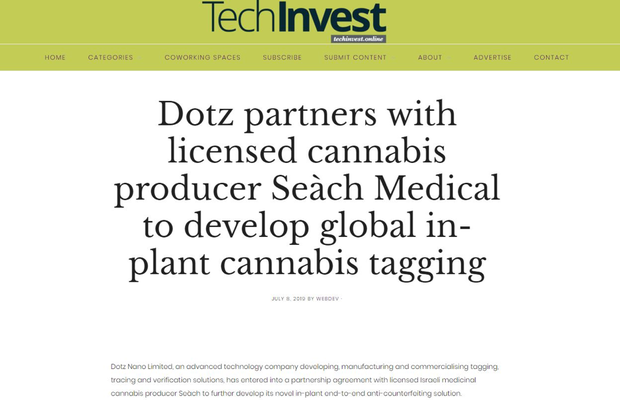 ... showing just how big this reach could be.

Interestingly, Seàch is merging with Tel Aviv-listed Beyond Time (TLV:BNTM), which will give DTZ further reach.

Seàch produces a wide variety of cannabis strains and has a product range encompassing buds, rolls and oils. It will add Dotz’s non-toxic BioDotzTM markers to cannabis plants at its global growing facilities.

The plants will then be integrated with in-plant security identifiers that can’t be forged or removed.

Prior to this DTZ had conducted a successful in-house proof of concept (PoC), where BioDotzTM were successfully embedded in plants with a close biological structure to cannabis.

The initial PoC showed BioDotzTM did not affect the basic properties or appearance of the plants and were detectable days after being added.

BioDotzTM markers feature multiple layers of security and are designed to continue working in elevated temperatures over extended periods of time. The markers can be identified on-site and in real-time using Dotz’s secure app-based reader.

“Seàch is a very experienced medicinal cannabis producer with a reputation for developing new strains and adopting cutting-edge technology. Our partnership with them allows us to progress in-plant tag-and-trace with our unique anti-counterfeiting technology,” DTZ CEO Uzi Breier said.

“Our cooperation will examine the best ways to successfully insert our non-toxic security taggants directly into cannabis plants, enhancing product security throughout the cannabis supply chain. We see this as a significant opportunity for Dotz, particularly as existing track-and-trace cannabis security measures, such as RFID tags and barcodes, have been insufficient in preventing illegal cannabis from being introduced into the legal market as well as legal cannabis from being diverted to the illegal market.”

DTZ’s BioDotz solution could have a major impact on the cannabis industry, particularly in preventing illegal strains and products to be sold.

Looking at the broader market

The applications for nanotechnology are endless.

Nanotechnology can increase the capabilities of electronics devices, whilst reducing power consumption. Researchers are developing customised nanoparticles, the size of molecules that can deliver drugs directly to diseased cells. It is changing the way food is packaged and tastes and it is being used to address fuel shortages including diesel and gas.

That’s just the tip of the iceberg.

The global market for nanotechnologies in energy applications alone should grow from $5.7 billion in 2018 to reach $10.0 billion by 2023.

And according to MarketWatch, the global market for Healthcare Nanotechnology will reach US$255.5 billion, from US$160.8 billion this year.

You get the picture. It’s a big addressable market and if a company can find a niche — just a microscopic part of an industry where it can have a commercial influence — then the sky is the limit.

It is targeting large global markets:

DTZ is, in fact, hard at work product testing with prospective customers to build sales activity in new markets and have an impact against the $2.2 trillion of products being counterfeited.

The company is developing, manufacturing and commercialising tagging, tracing and verification solutions that include its ValiDotzTM, FluorensicTM, and BioDotzTM products. These products can be embedded into plastics, fuels, lubricants, chemicals, and even Cannabis and Tobacco plants to create product specific codes and trace for origin.

DTZ already has a global reach with sales offices in the USA, Japan and Switzerland and industrial manufacturing facilities in the USA and Germany. It announced its first customer sales contracts in January this year.

These contracts, coupled with impending revenues from its cannabis play, could improve DTZ’s bottom line quickly and dramatically — not to mention lift its $14 million market cap.

With all that in mind, how does DTZ’s solutions work?

The tech break down

Here’s a short video with regard to DTZ’s nanotechnology solutions work:

Without going into too much detail (see website for more information), DTZ offers in-product tagging solutions.

Known as ValiDotzTM, these security markers are directly embedded during the production process to impart a non-reversible, product-specific code, which can be then easily authenticated on-site and in real time, to provide a high confidence end-to-end authentication solution.

The company explains this state-of-the-art solution using the following graphic:

Here is the technology principle:

The overall benefits of embedding this technology include:

These markers also have a great many uses:

BioDotzTM are carbon-based markers that are the first in-plant security solution for supply chain monitoring of plants of value such as cannabis and tobacco. As BioDotzTM cannot be removed from the plant.

Breaking into the cannabis industry is a milestone in itself, but DTZ has a raft of prospective industries and clients on its books and it is only just getting started.

DTZ is turning its attention to executing additional sales contracts.

It recently raised $1 million, which will go towards increasing its sales and marketing activity, as well as completing advanced engagements with potential customers in the fuel and fracking industries.

However, now DTZ has a taste for the global cannabis industry, it is expected more deals will flow in this space as well, as well as revenues.

A move into cannabis is smart one by DTZ. It is adding another multi-billion dollar industry to its repertoire in a region where the cannabis industry is rapidly expanding.

The new agreement with the Canadian cannabis company is a small step in penetrating this market, but nonetheless a significant one. Expect further deals to follow now in this space, to back up the sales agreements that are expected to come through in other industries.

Counterfeit is a $22 trillion dollar blight on society and DTZ can help.