The company is targeting gas supply to the premium local Californian gas market and the burgeoning LNG market in North America.

There is an unsatiated 7 BCF/day gas market in California which imports over 90% of its natural gas from Canada and other US states. Natural gas in California continues to realise premium prices, which are currently close to US$4.00 per mcf with the cold of winter still to come to support and boost gas and oil prices.

SGC will drill its Borba 1-7 well in the Sacramento Basin.

The interception of good reservoirs during drilling is expected to lead to further opportunities in a new play fairway in this area.

Sacgasco has recently completed construction of a drill pad at Borba in readiness for the drilling of the Borba 1-7 well that is due to commence before year-end.

SGC’s management team has a proven record of identifying new wells, bringing them into production and managing sustained output.

Borba is no exception. Neither is its Red earth acquisition, which the company announced on Friday last week, that should produce its own catalysts.

This asset consists of 6 oilfields and associated infrastructure and is located 450km north of Edmonton.

Additional revenues are received from third parties who use some of the Red earth infrastructure.

Red Earth is currently producing over 1000 Barrels of Sweet Light (39o API) oil per day (~300 BOPD net to SGC working interest), and will provide SGC with near term revenue.

Along with Red Earth, SGC has numerous share price catalysts on the horizon as drilling at Borba commences and results from 11 layers of interpreted hydrocarbons come to hand.

Before we look at the coming drilling program at Borba and the Red Earth acquisition, let’s take a more detailed look at SGC.

SGC looks to make its mark in North American gas

Prior to news of the current acquisition, Sacgasco Limited (ASX:SGC) already had an extensive portfolio of natural gas producing wells and prospects at both exploration and appraisal stages, including multi-trillion cubic feet (tcf) opportunities. 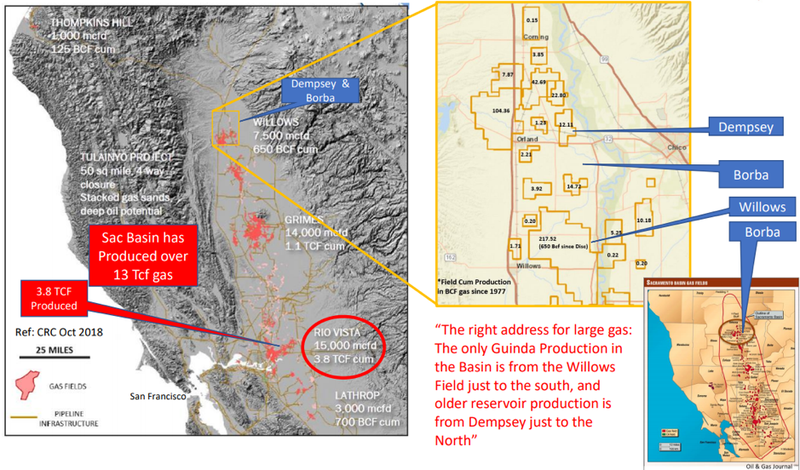 Sacgasco is targeting gas supply to the local Californian gas market and the burgeoning LNG market in North America.

The size of the prospects in California have the potential to supply both domestic Californian natural gas and export LNG markets, including those in Asia.

From a broader perspective, Sacgasco’s strategy is to find, acquire and develop undervalued and under-developed opportunities connected to materially under-supplied oil and gas markets across the world.

The interception of good reservoirs during drilling is expected to lead to further opportunities in a new play fairway in this area.

Sacgasco has recently completed construction of a drill pad at Borba in readiness for the drilling of the Borba 1-7 well that is due to commence before year-end.

Sacgasco’s management team has already demonstrated their ability to identify high-quality targets, bringing them into production at commercially viable costs. However, they are waiting for the one ‘big one’ which means that exploration success at Borba should be a prominent catalyst.

SGC-owned meter stations already connected to open access gas pipelines are in close proximity, and other pipelines connections are within two miles of the Borba location. Consequently, a gas strike may provide immediate share price traction given that it can immediately be sold on the open market.

As the company drills a range of reservoirs, conducts testing and arrives at a resource estimate, further share price momentum could occur. Looking at the big picture, there is high demand for in-state gas production in California, evidenced by resilient gas pricing despite a fall in global oil prices - like any commodity, a continuation of robust prices should provide share price support.

In terms of funding, the company has recently raised approximately $2 million in capital, part of which has been used to acquire a 30% working interest in the Red Earth producing assets (net 300 barrels of oil per day).

There are expected to be several market moving developments for SGC in relation to its Borba well in the coming months, including drilling.

Despite Covid-19 restrictions, SGC’s wells produced a combined 231,000 cubic feet of gas in calendar year 2019. Sacgasco’s portfolio of wells and gas infrastructure, particularly natural gas pipelines and Gas Sales Meter Stations provide a platform to scale up production in the near term.

While SGC’s production profile is important in terms of keeping cash flow ticking over, just as important has been the wealth of knowledge management has gained in relation to areas in close proximity, below or on trend to producing wells in the region.

This was instrumental in SGC gaining a substantial interest (76% WI) in the Borba 1-7 prospect where it is targeting multiple stacked reservoirs based on information gained from its gas saturated Dempsey Well and contiguous 3 D seismic.

The similar geological trends can be seen in the following graphic which tend to indicate that Borba is a ‘hotter’ prospect than Dempsey with better reservoirs expected. 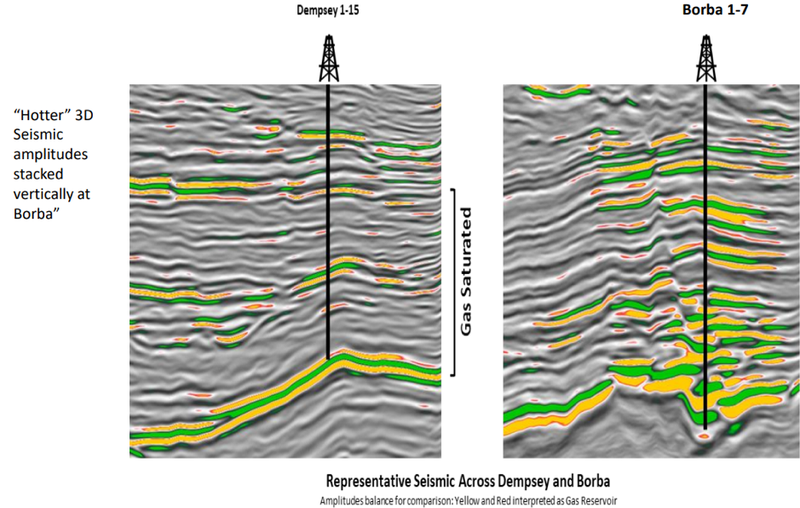 Recently, the company undertook construction of a well pad at Borba 1-7, in an all-weather location that provides the company with a future production base.

The proposed Borba well will test the presence of hydrocarbons in all 11 anomalous layers.

While direct peer comparisons are difficult to find, SGC points to the Sacramento Basin as the Perth Basin’s ‘big brother’. 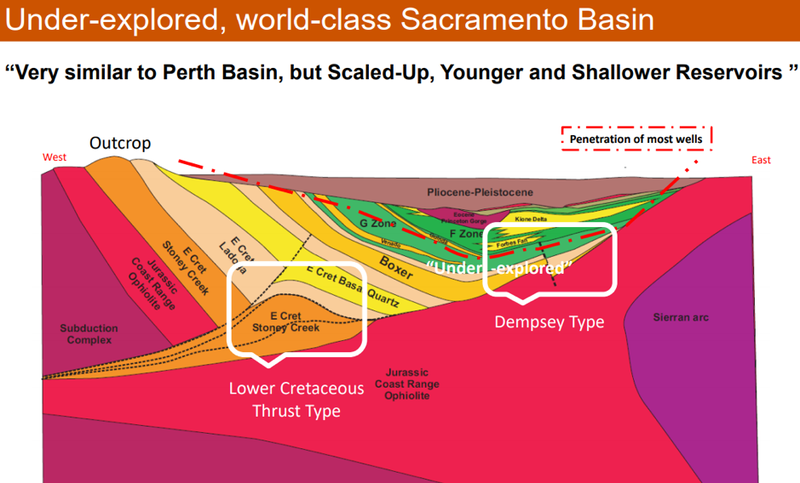 However, it is early days in the Perth Basin and with some recent exploration success there have been some strong share price performances from companies such as Strike Energy (ASX: STX) and Warrego Energy (ASX: WGO) with both those companies having experienced a three-fold share price increase since March.

Strike Energy has a market capitalisation of about $470 million while Warrego Energy is capped at approximately $190 million.

Both companies have undergone re-ratings based on the future prospect of production as they are currently not generating revenues.

Consequently, Sacgasco’s reputation as a proven producer with cash flows from modest production at least helping to cover costs could weigh up quite favourably against the other two companies, particularly given it also has strong prospects in terms of future production.

There appears to be a serious disconnect between the valuation being attributed to Sacgasco and transitional oil and gas explorers/producers in Australia such as Strike and Warrego that are operating in similar, if not harsher geological environments.

One important factor that differentiates the two basins is the drill depths, which in Sacramento is less than 3000 metres compared with over 5000 metres in the Perth Basin, resulting in Sacgasco’s ability to undertake lower cost exploration. 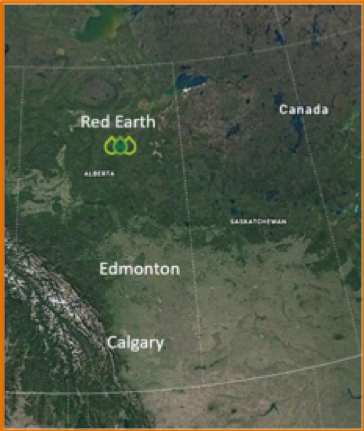 A Purchase and Sales Agreement has been signed and 10% deposit paid into Escrow for this acquisition, which is expected to close before 31 January 2021.

The A$640,000 acquisition will be fully funded through the placement of $2,300,000 of SGC shares at 3.5c per share and 8.85 million SGC shares at a deemed price of 4.0 cents per share (A$353.5k). This is equivalent to a purchase price of a low and attractive US$2,400 per flowing BOPD. Such low acquisition prices are symptomatic of the impact from the COVID pandemic. Recovery of oil consumption to anywhere near normal pricing could prove a bonanza for SGC.

Highlights of the acquisition include:

Note the first point: at current prices the assets are cash flow positive and highly leveraged to increased oil prices.

Blue Sky Resources recently acquired the Red Earth assets and will be the primary operator with a 55% WI at Closing. The private company operates other oilfields in the vicinity and SGC expects this will provide operational synergies between the companies.

The acquisition is subject to approval by the Alberta Energy Regulator (AER).

Red Earth provides SGC with access to an asset with cumulative oil production over 30 years of around 63 million barrels with a low 10% base decline rate.

Approximately 160 producing wells are included in the assets. The wells are predominantly on primary recovery with pump jacks lifting the oil to surface facilities and oil flowlines.

Current gross production is around 1,000 BOPD, with further opportunities to return currently idled wells to production with the potential for an additional 300 BOPD in the short term. Additional; opportunities exist through development drilling and extending waterflood oil recovery enhancement projects.

Gross (100%) Remaining Reserves were estimated on a Deterministic Basis by independent Auditors for the previous Operator at 31 December, 2019 as follows:

Sacgasco’s share at Closing will be 1 million barrels (2P) of light sweet oil. The purchase price is equivalent to a very low US$0.55 per Barrel of Proved Oil Reserves.

Already completed subsurface well data and 3D and 2D seismic, provides the owners of Red Earth with the basis for considerable exploration and development opportunity, but the upside from inevitable Probable Reserves and Exploration Resources have not been quantified by the release today.

SGC will support the evaluation and development through its geological and geophysical strengths and access to DUG Insight Software to provide technical support to Blue Sky in the interpretation of the extensive seismic data to determine development locations to maintain and grow production, as well as map the exploration upside in the extensive Red Earth acreage.

Sacgasco is the Operator of all but one of the following wells, highlighting its extensive industry experience and local knowledge that we referred to earlier. 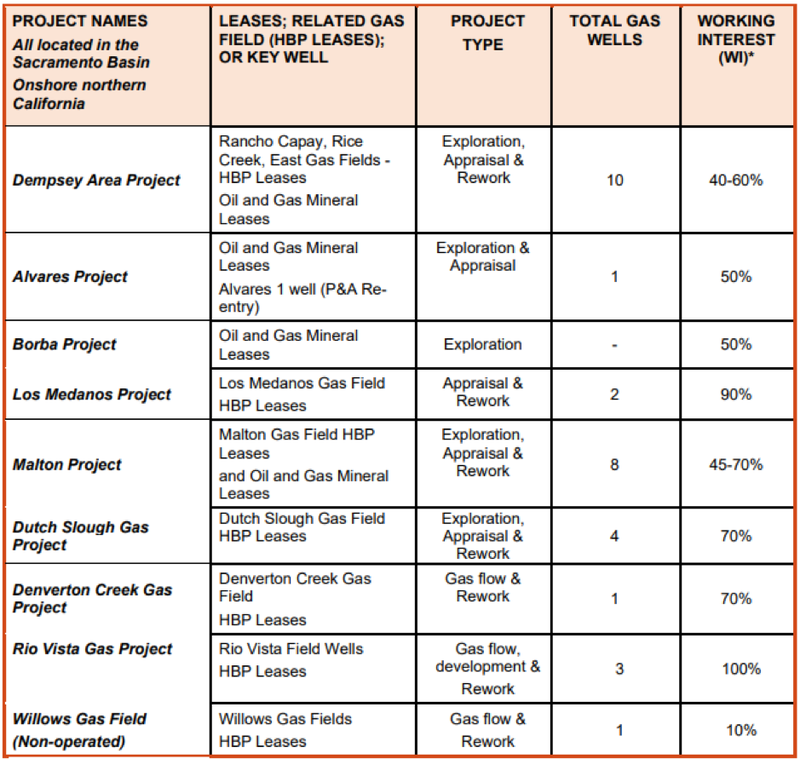 The acquisition of its 30% stake in Red Earth adds another layer to its solid base of assets and with work to commence in Canada shortly and with drilling expected to commence at Borba before the end of the year, there could be several catalysts on the horizon for this $11M capped company.