Our 2021 Catalyst Hunter pick of the year Grand Gulf Energy (ASX:GGE) is making some serious progress towards that maiden helium drilling program we are eagerly waiting for.

We made GGE our Pick of the Year after it acquired its USA helium project in the heart of the world’s most prolific helium producing region dubbed the “Saudi Arabia of helium”.

The GGE share price made a sharp move upwards on the charts last week, which we believe could be connected to an explosion at Gazprom’s massive Amur helium project in Siberia. And the explosion could keep the project offline for up to six months, tightening global helium supply.

The US intends to plough US$50B of government funds into chip manufacturing in a bid to maintain its edge over China, and these chips need lot of helium.

Helium is an “inert” gas, it does not react with other elements, which makes it ideal for manufacturing semiconductors.

While we believe there are significant geopolitical elements to the GGE story, our long term vision for our investment in GGE is also driven by factors internal to the company.

We liked that GGE’s helium acquisition was structured in a way where GGE would be drilling its maiden well within the first 12-months of the acquisition being announced, noting that these type drilling events usually take much longer to prepare for.

We also liked that the project had a lot of similarities to the Doe Canyon Helium Field (8 miles to the west of GEE's assets) which is producing 18mmcf/day of raw gas with average helium grades of ~0.5%.

Last week GGE announced that permitting for the drilling program had commenced and that GGE had appointed Doug Frederick as the drilling superintendent over its helium project.

Doug Frederick is a highly experienced driller, having worked on the analogous Doe Canyon Field, the second largest North American helium discovery in over 70 years.

With Doug on the team and permitting under way, we expect additional news flow from GGE in the near term as GGE is proving since our investment that it moves quickly.

We think that GGE’s quick progress is well-timed as some significant shifts are under way in the helium market, with far reaching consequences both from a technology perspective and a geopolitical perspective.

For a quick high-level summary of why we invested in GGE, why we continue to hold GGE, key objectives for 2022, and risks, see our 2022 investment memo for GGE or click the image below:

The permits that GGE are seeking are for grounds which have recently expanded - which in turn could significantly increase the scale of their project.

This directly advances two of our stated objectives in our Investment Memo:

Doug Frederick is a key appointment and advances Objective #1.

On the other hand, while we thought additional leasing would be the route GGE would take to expand the resource, they’ve instead opted to do that via ownership changes.

Additional leasing may still be on the agenda for GGE.

As for how GGE’s latest announcement advances Objective #2 - late last year GGE announced that they had come to an agreement with the vendors of the US Helium project for GGE to increase its ownership of the project.

The initial terms of the deal were heavily weighted to later drilling campaigns with it structured so that GGE’s initial ownership in the project was 25% with the remaining 50% being earned-in through a 3-well drilling program.

Most importantly the newly structured acquisition arrangement means GGE’s initial ownership in the project has now increased to 55% and the remaining 30% is to be earned-into through the planned 3-well drilling program.

GGE has decided to secure as much of an upfront ownership as possible before it actually drills the first well, should the program be successful GGE will end up owning 70% of the project, whereas under the initial terms after the first well was drilled GGE would only own 50%.

This means that if that first drilling well is a success, we think the market could value GGE based on the increased % ownership.

Below is a table showing the key-changes.

The increased ownership in the project also translates to an increase in the Net resource attributable to GGE.

The figure has gone from 5.6BCF net to GGE to now a 6.3BCF prospective resource, an 11% increase.

In our last note we did a back of the envelope calculation using the prospective resource figure, with the net resource to GGE now 0.7BCF higher this just means that the potential reward for GGE instantly got bigger.

Of course this is only a prospective resource we are talking about - there is less confidence in this number as the project is at an early stage and hasn't been drill tested yet.

Let's also not forget that with existing infrastructure in place, and assuming the drilling programs are a success, GGE could skip the proving up stage of the resource definition phase and quickly put it’s project into production.

See our previous note for a deep-dive on why we think this is possible.

With the drilling program now only a few months away GGE has managed to bring Doug Frederick onboard as the superintendent of drilling.

More importantly though, Doug spent ~20-years with Kinder Morgan who owns the Doe Canyon Field and is capped at ~US$40 billion.

As drilling director at Kinder Morgan, Doug oversaw 9 drill-rigs and 30 workover rigs and managed annual exploration budgets of up to US$300M + OPEX budgets of US$200m.

During his time with Kinder Morgan he was instrumental in the development of one of the world biggest CO2 producing fields in the world - The McElmo Dome Field producing (~1 BCF/day); and more importantly the Doe Canyon Field, the second largest North American helium discovery in over 70 years.

This is why Doug's appointment was particularly interesting to us - it looks like GGE’s drilling programme is in safe hands.

We mentioned in our GGE launch article last year that a key reason for making GGE our 2021 Pick of the Year was because GGE’s project was considered analogous to the Doe Canyon helium field.

Clearly Doug knows this part of the world extremely well and has spent most of his life drilling for helium, so as GGE shareholders, we think that this is as strong of an appointment the company could have made going into the maiden drilling program.

It’s also worth noting that Doug’s decision to join the project is in our eyes, an endorsement of the potential of GGE’s asset.

GGE poised to benefit from US semiconductor boom

Here are the 4 reasons we invested in GGE and made it our Catalyst Hunter Pick of the Year for 2021 (recorded in our 2022 GGE investment memo): 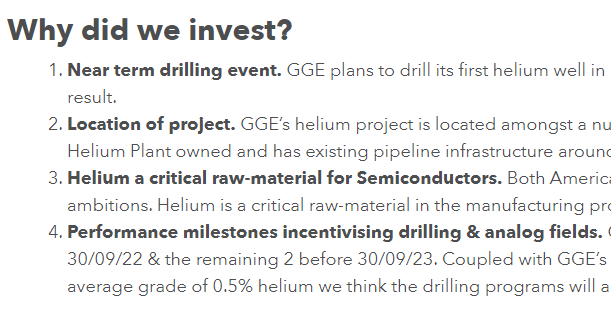 We will now focus further on reasons #2 and #3.

To date, it seems like our investment thesis is playing out.

Meaning, we invested in GGE for its ideal location in Utah, its resource is highly leveraged to an exponential tech trend in semiconductor (chip) manufacturing and increased animosity between major powers impacting supply dynamics.

First up, GGE’s project in Utah is next door to Arizona, where Taiwan Semiconductor Manufacturing Company and Intel are building a combined $30B of new chip facilities.

We also note that Korean giant, Samsung, announced in November of last year that it too, was building a mammoth US$17B chip facility in Texas.

And we think GGE intends to seal helium offtake deals with chip manufacturers once they have produced a product.

These are companies with deep pockets, and they will need plentiful helium to produce their high end chips.

Helium is perfect for making chips as it is an “inert” gas meaning it doesn’t react with the silicon which chips are made from.

It’s also got high thermal conductivity, meaning it takes heat away. This makes miniaturization of the semiconductors possible.

The short version: the number of chips in the world is going exponential and to make them you need helium because it keeps them cool and doesn’t react with the core component - silicon.

As a result, we think helium is highly leveraged to exponential tech trends.

There’s geopolitical elements to this story too.

But it quickly came off line after an explosion and fire broke out:

With the Siberian helium hub off-line for six months - focus could shift once more towards US supply.

The way we see it, there are two main factions in an increasingly multipolar geopolitical landscape - the US and its allies on one side and Russia and China on the other.

Which plays into the helium market, as the semiconductor industry and the helium that is needed to sustain it, are coloured by the push to domesticate supply of critical raw materials.

Needless to say, US relations with Russia are pretty strained right now, so we think it’s highly likely that Gazprom’s helium (when it comes back on line) goes to Chinese chip plants instead of the US.

All of this puts the US in a tight spot, and the US is keenly aware that their dominance in chip manufacturing is being eroded by China:

That red ascending line at the bottom is the predicted growth of China’s chip market share, and the descending blue line is the US.

The US is moving quickly to address this however, by allocating US$52B in funding to support the lagging industry.

The Creating Helpful Incentives to Produce Semiconductors, or CHIPS Act, has bipartisan support.

We think it will eventually pass despite some recent hiccups - and the big chip facility investments we mentioned before, are preempting the current push by the US government.

Which should only benefit GGE further down the track as the US looks to secure its helium supplies.

Again, if you want a quick high-level summary of why we invested in GGE, why we continue to hold a position in GGE, key objectives for 2022, and risks: