American Patriot (ASX:AOW) is continuing its indomitable acquisition spree across the US in Texas and the Gulf Coast.

The gradual accumulation of viable oil and gas assets is part of an overarching strategy to transform AOW into a fully-fledged oiler generating strong operating margins and reaping value for shareholders.

AOW has made its first flurry of acquisitions and is on the cards to repeat the feat as part of its value-accretive strategy.

Including all acquisitions, AOW is on track to achieve production of 500 barrels of oil per day (boepd) by the end of 2017 with over 2.3 mboe of proven oil and gas reserves certified by independent reserve reports. Combined, the company’s assets are estimated to have the potential to generate more than US$80 million in revenue based on current oil and gas prices.

It should be noted, however, that AOW remains a speculative company and investors should seek professional financial advice if considering this stock for their portfolio.

AOW is targeting a string of acquisitions in 2018, which will all likely add verified oil assets to its portfolio, and sales revenues to its balance sheet. AOW is selectively picking up the most amenable oil wells in Texas and folding them into a concerted oil productive strategy, aiming to achieve around 3000 boepd once complete. AOW could also be an acquisition target itself, as this sort of scale could increasingly attract the attention of larger oil companies.

AOW has signed a Letter of Intent (LOI) to acquire additional conventional oil and gas assets in East Texas, consisting of 37 boepd of oil per day and 440 mcfd of gas production (110 boepd). It also recently signed a second LOI to acquire an additional conventional oil and gas asset in South Texas, currently producing 40 boepd and 374 mcfd of gas (102 boepd) and possessing significant upside potential.

Here’s a look at the latest activity.

The assets included in Tranche 1, contain 1,100,000 barrels of oil equivalent proven oil and gas 1P reserves, certified by independent reserve reports. These reserves have been acquired for US$2.5 million and are estimated to have the potential to generate US$20 million revenue.

It also contains oil and gas production of 170 boepd and 1P proven reserves of 300 mboe.

The assets generate US$1 million of annual cash flow net to AOW and have low cost economics of approximately $20/bbl, and can sustain low oil prices. The purchase includes over 30 well bores of existing conventional production, with the ability to grow production significantly for minimal capital expenditure to restart shut in production. There is also substantial workover and behind pipe potential on the existing wells.

The assets included in Tranche 2 are expected to more than double the production and reserve base acquired in Tranche 1 delivering an additional 120 boepd and 1P reserves of 600mboe.

The East Texas fields acquired in this transaction are located in Harrison, Gregg, Rusk and Upshur Counties, Texas. The fields are mature legacy assets with current daily production of 37bopd oil and 440mcf/d gas production.

The asset consists of 50 barrels of oil per day of conventional production and contains 300,000 barrels equivalent proven oil and gas 1P reserves. These reserves have been acquired for US$430,000 and are forecast to generate US$11 million revenue with a PV10 value of $US3 million.

The most recent mooted acquisition will see AOW acquire an additional conventional oil and gas asset in South Texas. This asset to be acquired from private oil and gas company, HJH Resources LLC, in a private, off-market transaction expected to close mid-January 2018, currently produces 40 boepd and 374 mcfd of gas (102 boepd).

The latest asset possesses significant upside potential, with 430,000 boe proven oil and gas 1P reserves certified by independent reserve reports. These reserves have been acquired for US$1.2 million and are estimated to have the potential to generate more than US$15 million in revenue for AOW. The reserve study has been conservatively valued using US$50/bbl verses current market prices of US$55/bbl.

Engineering due diligence has been completed, however land title and environmental due diligence remains to be carried out. The asset consists of 38 Austin Chalk producing wells on 43 leases and requires minimal workover expenditure to significantly increase production. AOW will operate this asset, with assistance from the existing owner during the transition period.

The following map shows the location of the new assets in relation to AOW’s overall strategy. 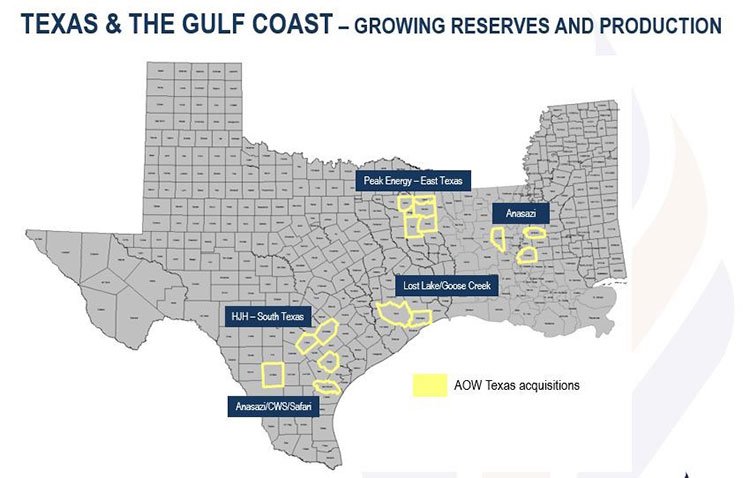 Once combined with the other assets AOW has acquired, AOW is on track to achieve production of 300 boepd by the end of 2017 with 1 million barrels of proven oil and gas reserves. AOW estimates it can generate approximately US$30 million revenue at a current oil price of ~$56/bbl.

AOW expects production and revenue will increase significantly as it closes additional transactions and enhances production in recently acquired oil and gas fields.

AOW is targeting a string of acquisitions in 2018, which will all likely add verified oil assets to its asset portfolio, and sales revenues to its balance sheet. AOW is selectively picking up the most amenable oil wells scattered around the US, and folding them into a concerted oil productive strategy that is eventually aiming to achieve around 3000 barrels per day once fully completed.

To achieve this feat, AOW has embarked on a frenetic acquisition spree aimed at distressed assets and paying just cents on the dollar for viable oil production resources.

AOW has identified a number of additional acquisition opportunities, including assets that are an order of magnitude larger than those recently acquired. The company will look to execute on those and build production to well over 1000 boepd in 2018.

This strategy is underpinned by a growing reserve base and cash flow to the company and supported by its US-based funder.

Acquiring oil assets currently locked in bankruptcy proceedings is proving to be lucrative for oilers who are able to discern treasure from trash, when it comes to evaluating actual flow rates.

Given that oil prices have stayed immobile around the $40-60/bbl mark, and the fact that non-conventional shale plays are becoming tougher to commercialise, AOW’s no-thrills strategy is exactly what the bank manager ordered.

As a simple barometer, it costs around $5-10 million for a shale well (even more if it’s off-shore), whereas ‘no-thrills’ conventional wells typically cost less than $1 million per well.

In terms of aggregate reserves, AOW is punching above its $0.03 share price and A$9 million market cap, by having an officially corroborated Reserve estimate of 2 million barrels of oil equivalent (generating at least US$80 million in revenue if assuming an oil price of US$50/bbl).

AOW’s share price has settled around the $0.03 mark, and has begun to recover from its low in June of less than 2 cents.

AOW is now on course to become a significant producer in 2018 and will likely see its current market footprint (as well as valuation) expand organically over time.

However, this is speculation on our part and investors should seek professional financial advice if considering this stock for their portfolio.

For the time being, AOW is closing out 2017 with 500 barrels of oil equivalent per day flowing and AOW careening towards cash flow positive status.

Over the longer-term, AOW intends to raise its production calibre to over 5000bpd, handing this micro-capped oiler a potentially profitable commercial arsenal.

From a revenue standpoint, AOW hopes to unlock over $150 million in sales revenue from the oil it already has, but it wants to push things further by improving flow rates and adding more viable assets to its portfolio seen below:

Here they are mapped out: 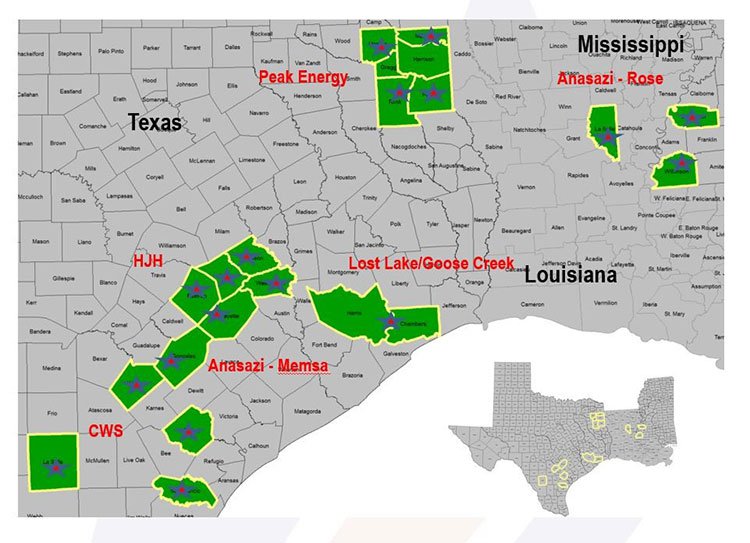 From a fundamental perspective, institutional money seems to be backing AOW and its intentions.

AOW will use the funds from this capital raising to fund further acquisitions of conventional oil and gas projects in Texas. Such acquisitions are likely to be purely value accretive and self-financing; which means AOW is advised to do as many as it can and as quickly as possible. 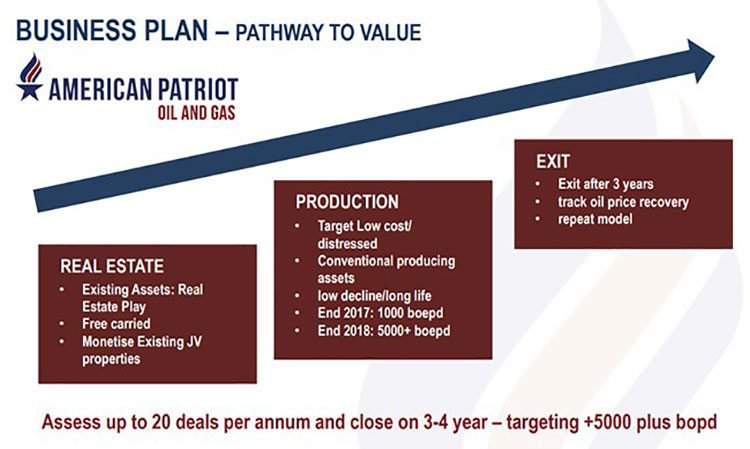 Targeting distressed assets as a priority, AOW wants to get into good projects at the low end of the cycle and hopes to see its US asset portfolio appreciate, fuelled by further acquisitions in the US and efficient production that is able to cope with low oil prices.

Oil prices have been range-bound since early 2016: 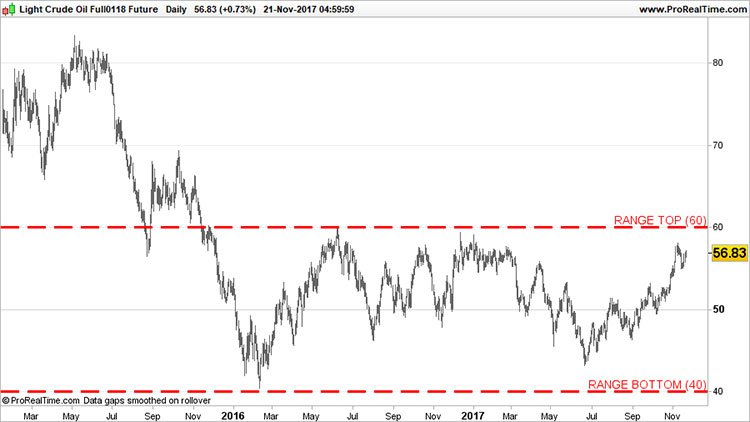 Having taken a swan-dive from their lofty $150+ peaks in 2014, oil prices have remained in a stable $40-60 range for over two years. This is a good backdrop to be picking up distressed assets for cents on the dollar.

If oil prices do make a significant recovery, this bodes well for AOW and if they can remain in their recent range, AOW can sustain its existing strategy.

In the worst case, if oil prices suffer again, AOW can maintain viability down to as low as $20/bbl.

Changing sentiment in oil, leads to lucrative opportunities for AOW

AOW is going back to basics and kickstarting a straightforward strategy built on timely acquisitions and pragmatic exploration.

AOW is blessed with over 2 million barrels of reserves focused in the heartland of US oil — Texas.

In the next 12 months, AOW intends to expand its reserve/resource base and progress its aggressive acquisition strategy by restarting production at shut wells.

The focus is on cost efficiency, cash flow metrics and tight capital discipline.

AOW is striving to expand its oil market position, but with efficiency as its core principle. Shale exploration can be highly lucrative, but it’s also highly risky and expensive. In today’s oil market, capital expenditure is better targeted at low risk opportunities while companies looking for ‘growth’ are likely to falter at the expense of those looking for efficient production at all stages.

The implications are that production profiles may decline and companies may get smaller, but returns should improve. This is what AOW is banking on, and is going out there to make it all happen.

With important milestones being reached, AOW seeks to become a significant oil and gas production company which will increasingly attract the attention of other larger oil companies and is well on track to being cash flow positive in 2018.