Each project holds the chance of making a new metals discovery, and has potential to re-rate TG1’s share price.

Importantly, all three of the projects have delivered up impressive drill targets that are yet to be drill tested.

TG1’s near term drilling programs are as follows:

The drilling will be focused on an array of targets set below historic mine shafts where gold was produced in the 1880s, and where only minor surface sampling programs have been run since.

Most importantly, this gold mineralisation has never been followed up with any drilling, so TG1 is trying to make an entirely NEW discovery. 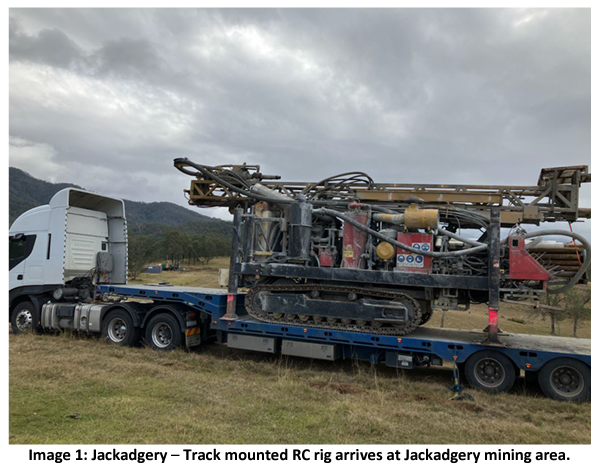 We hope any drilling success will translate into a re-rate in the company’s share price from the low base it's starting from.

Given that this is the first ever drilling program at the NSW gold project, we have set the following expectations for the results:

We hope that as TG1 has such a low enterprise value, any achievement at or above our base case expectation will lead to a re-rate in its share price.

However, as we mentioned above, this isn't the only drilling program TG1 is doing this year. The company will have three independent shots at a new discovery — all being drilled this quarter.

After a quiet start to the year whilst TG1 completed multiple target generation work programs, TG1 has now started drilling the first of its three drilling programs planned for the rest of this year.

Therefore, like all micro cap explorers relying on sources of funding to make new discoveries, we suspect that TG1 may need to raise capital at some stage over the coming months to shore up its balance sheet.

Typically explorers run several rounds of drilling before a discovery is confirmed, hence why a strong cash balance is essential.

If TG1 does, however, make a discovery, we expect the company’s share price to re-rate significantly. This would then allow TG1 to raise capital at multiples of its current valuation.

As with all of our junior exploration Investments, we hope that the latter is the case.

With drilling now underway at TG1’s NSW gold project and two additional programs planned for this quarter, TG1 is making up ground against the key objectives we set in our Investment Memo.

To see the other key objectives we want to see TG1 achieve in 2022, check out our 2022 Investment Memo by clicking on the image below. 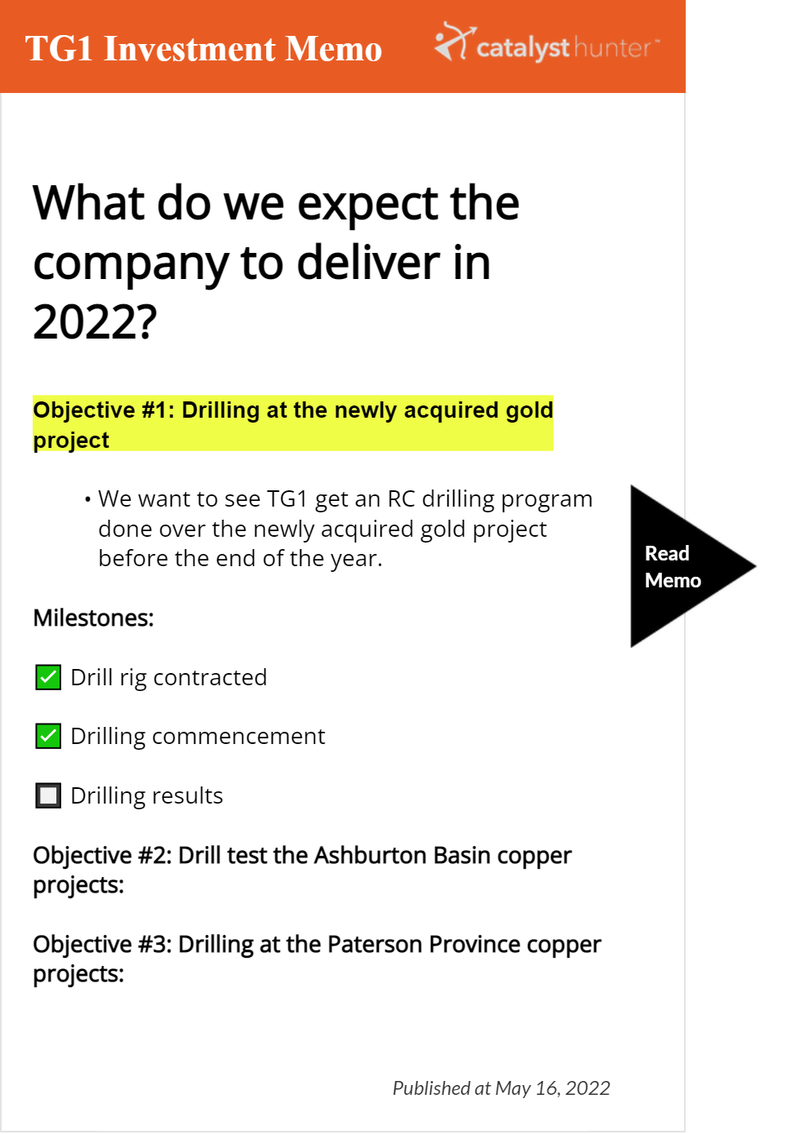 Our last TG1 note covered the updated IP (geophysical) survey results that TG1 put out over its NSW gold project.

Off the back of these surveys, TG1 put together two high priority drill targets to go after.

Below are the specific targets that TG1 will be drilling in the drilling program that commenced today.

The first target will be in the area immediately below the ~220m long trench that the previous owners of the project (Kennecott and Southern Goldfields) dug in the mid 1980s.

Inside that 160m area two higher grade intervals were also picked up, measuring 5m at 18g/t of gold and 5m at 7.1g/t of gold.

The key takeaway from the IP survey results was the chargeability anomaly right underneath this zone. 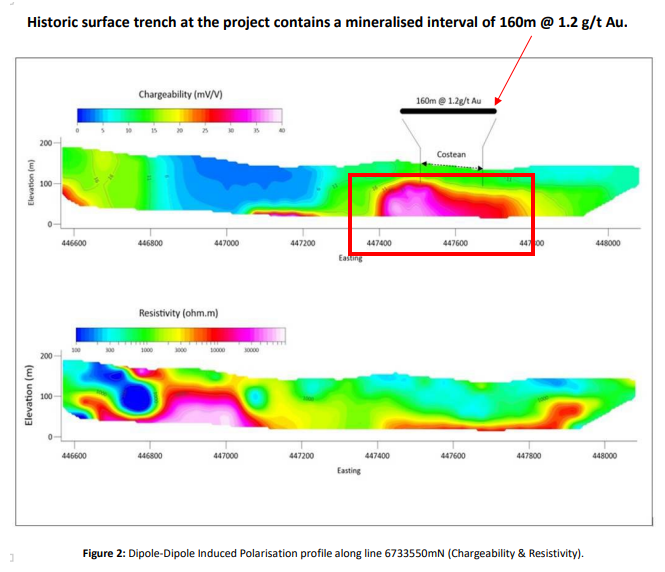 TG1 will be drilling straight into the guts of this anomaly, where we hope to see a continuation of mineralisation at depths.

Significantly, this target has never been drilled before, so any gold hits could signify a new discovery.

Drilling of the second target is based on previous rock chip sampling programs, which returned gold grades as high as 17.9g/t gold.

Below is an image of those rock chips and the area they were found in. 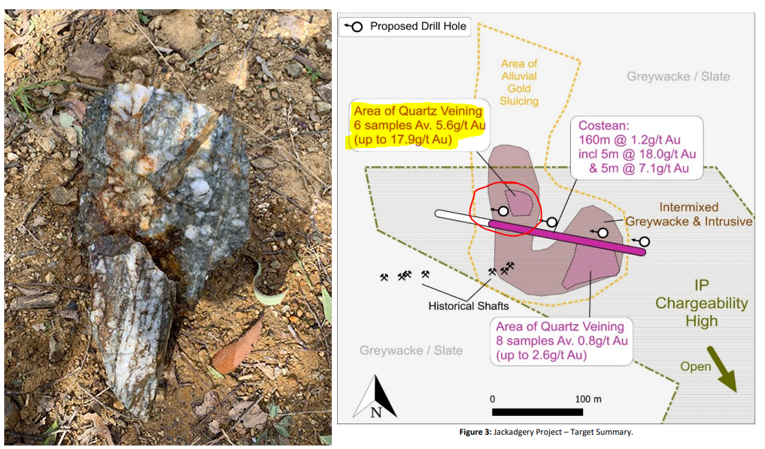 Again, these targets have never been drilled.

Any gold hits here could bring market interest to what has the potential to be a new gold discovery.

The obvious caveat here is that even if TG1 hits a gold structure with this round of drilling, we expect it will need to come back and do several more rounds of exploration before it can confirm a commercially viable discovery. This is typical for junior explorers, as major discoveries are rarely made during the first drilling campaign.

This is where the exploration risk inherent for all junior explorers comes into play.

But if a new discovery is made, TG1’s share price would likely re-rate to a level where the company can raise a lot more capital at a higher valuation.

TG1 put out the following timetable recently in its investor presentation, and below that is specifically what we are looking out for. 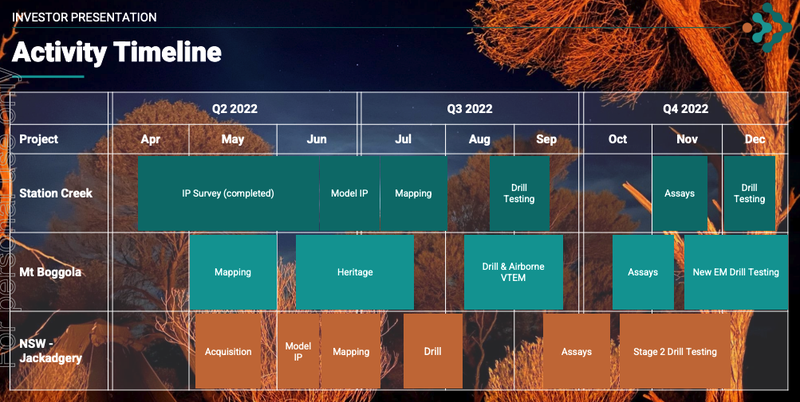 With drilling commenced, we now await the results. In today’s note, we set the following expectations for the drill results:

In the meantime, we’re watching to see if TG1 intercepts any visible gold, which would be a good indicator that they could be onto something.

Target generation works across WA copper/gold projects to be completed 🔄

TG1 spent most of the first half of 2022 running geophysical surveys across its portfolio of copper/gold projects in WA.

At the end of the March quarter, the company was still planning to do more work across the Ashburton Basin and Paterson Province.

We expect to see some more results from the ongoing target generation works in the lead up to a drilling program later in the year.

In our 2022 TG1 Investment Memo, we listed drilling programs across these projects as things we want to see TG1 achieve in 2022.

We expect to see the following projects drilled during this quarter.

1) Mt Boggola Project - Here, we want to see TG1 drill a group of three EM targets found during target generation work over the project area. The image below shows rock chips from those EM targets, grading as high as 8.7% copper at surface. 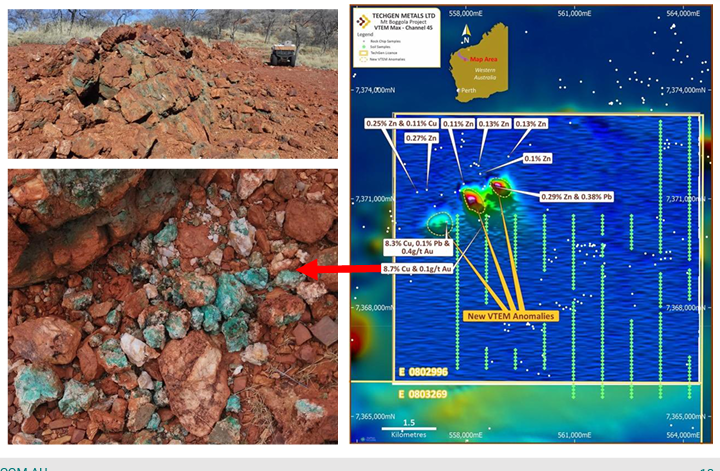 2) Station Creek Project - Here, we want to see TG1 drill a cluster of IP chargeability anomalies that sit right underneath high grade rock chips, which returned 54.8% copper and 249g/t silver.Below is an image of the rock chips and the massive IP anomalies from the recent surveying work completed on site. 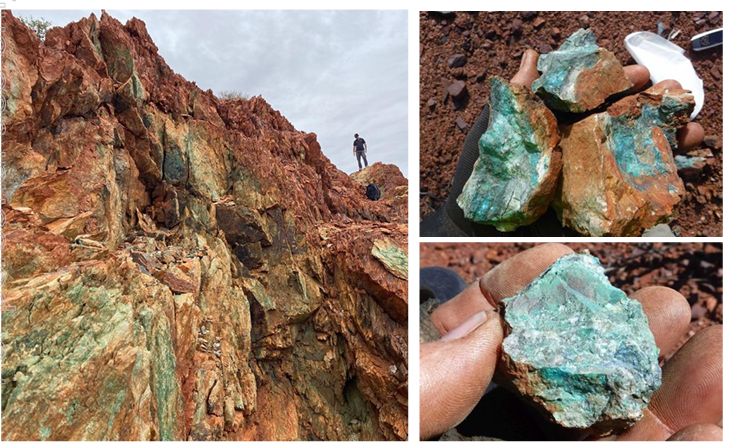 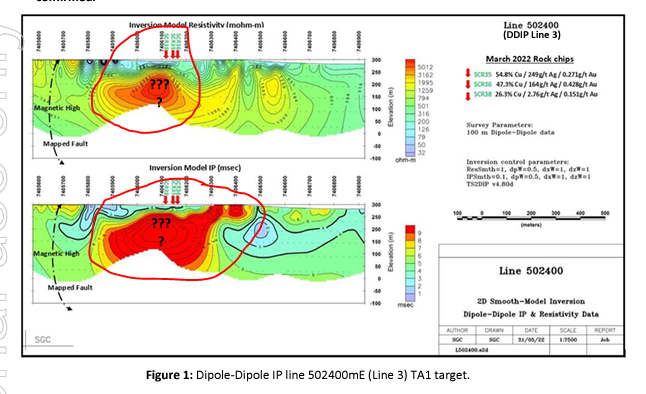 Below is our 2022 Investment Memo for TG1, where you can find a short, high level summary of our reasons for investing.