Fortescue Metals Group (ASX:FMG) is the world’s fourth largest iron ore producer. Capped at $23.9 billion, it is also one of Australia’s star miners.

So what is it about a diversified, $6.0 million junior that has Fortescue interested?

The junior is Strategic Energy Resources (ASX:SER), which has hold of high-quality copper-gold and pure-play gold assets — two situated in the famous Olympic Dam IOCG (iron oxide copper gold) corridor and another in a highly prospective region of North Queensland.

Location is everything here and that’s why SER is on my watchlist ... and that of FMG.

The company was awarded an exploration licence (EL6335) in April for a landholding 60 kilometres north-east of the $2.9 billion capped Oz Minerals’ (ASX:OZL) prolific Prominent Hill copper-gold mine, situated in the famous Olympic Copper-Gold Province of South Australia.

This is one of the most economically viable mining regions in the world, largely courtesy of by-product credits from gold production.

Highlighting the benefits of gold credits, a recent scoping study showed that another OZL mine in the same region, Carrapatenna, could produce approximately 120,000tpa of copper at all in sustaining costs (AISC) of about US$0.95/lb, implying a healthy margin of about US$1.80/lb at the current copper price.

Deposits in this region have historically yielded large, long life production. That in itself is a good reason for shareholders to keep an eye on SER.

However, a more pressing catalyst is a farm-in agreement with Fortescue.

In a move that could get SER’s share price moving in the near term, SER today announced that it has executed a farm-in and joint venture agreement with FMG Resources Pty Ltd, a Fortescue subsidiary, to explore the Myall Creek Copper-Gold project in South Australia’s IOCG corridor.

This fits in to Fortescue’s diversification strategy of acquiring select copper-gold projects, of which SER is one.

The Myall Creek and EL6335 holdings are situated in a region that is famous for multi-commodity developments with Olympic Dam and Prominent Hill being standout performers.

Hence Fortescue’s interest in the area.

There was always a chance that Fortescue would be interested in farming into SER’s Myall Creek Copper-Gold project, given FMG’s tenements abut nearly every boundary of the Myall Creek tenements as indicated below. 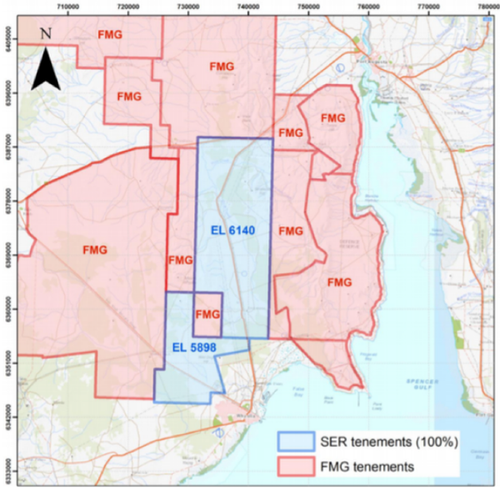 Also of interest is the proximity to a recent discovery by BHP Group (ASX:BHP), Oak Dam West.

The agreement will see Fortescue spend $1.5 million on exploration, including a minimum of 1500m of drilling at Myall Creek (EL6140 and EL5898) to earn an 80% interest in the project.

Fortescue will manage exploration, satisfy all expenditure requirements and keep the tenements in good standing.

Following Fortescue’s earn-in, a joint venture will be formed with FMG contributing 80% pro rata and SER 20% pro rata to further exploration and development.

Here’s a look at copper stained spoils from historic workings near Myall Creek. 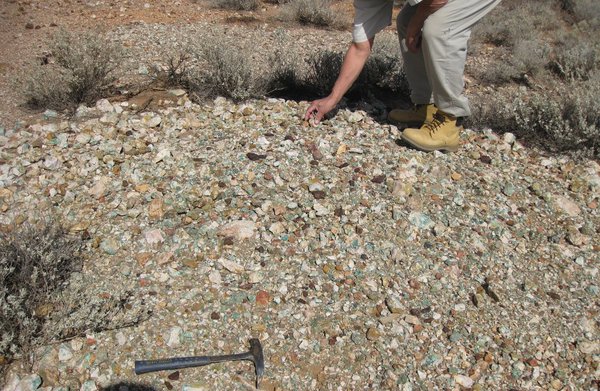 An August report from the Geological Survey of South Australia (GSSA) provides an interesting perspective on Myall Creek.

Not only is this area renowned for hosting huge deposits, another feature is the low cost of production.

As an example, Prominent Hill’s bottom quartile AISC in FY2017 was US$1.20 per pound of copper.

This was in a period where copper traded in a mid-range between US$2.50 per pound and US$3.00 per pound, implying particularly healthy margins.

The map below highlights the location of Myall Creek within the Olympic Copper-Gold Province. 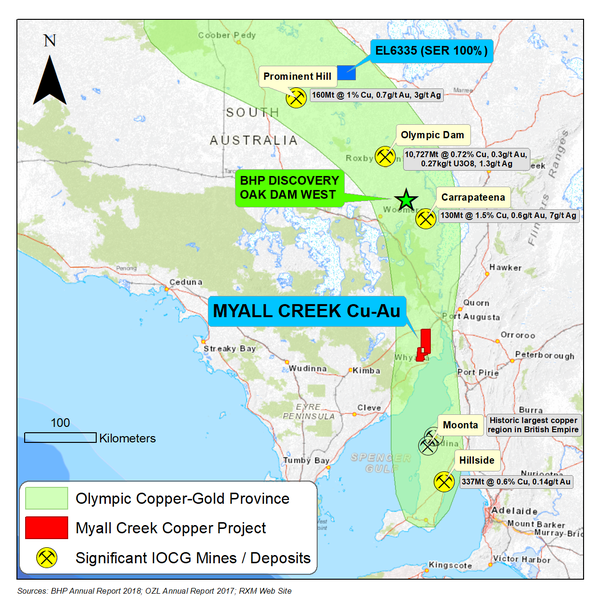 Now let’s have a look at the area in a little more detail.

Near Prominent Hill, SER has a prominent asset

SER was granted Exploration Licence EL6335 ‘Billa Kalina’ in the Olympic Copper-Gold Province, in what was an exceptionally well-timed acquisition.

The licence was granted shortly after BHP made a new discovery at its Oak Dam West project just a short distance away.

This news was big enough for BHP to make a rare public disclosure about early drilling results, highlighting the prospectivity of the area.

Further drilling by BHP could also have a positive impact on SER’s share price. Interestingly, SER’s stock rallied on the back of the BHP announcement in late November last year leading to a please explain from the ASX: 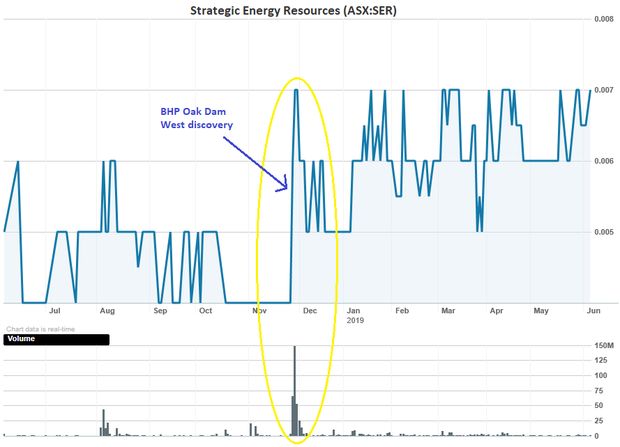 The share price has since traded at around that elevated level, so there is definitely investor interest in its opportunity in this region.

The other handy thing to note is that due to BHP, FMG and OZL holding the key geophysical anomalies in the area, the area remains largely underexplored.

The relationship SER has with the Department of Defence (DoD) also goes to the underexplored nature of the project.

The DoD granted SER access to operate within its Cultana Training Area in September 2018, allowing SER to explore its Myall Creek Copper-Gold Project. SER is one of the only groups to have been granted access to explore within the area.

Coming back to the main point, BHP’s movements are important, but news a month or so ago that Fortescue was interested had also piqued attention in the company.

Now with the farm-in to become a reality, it should mean onwards and upwards for the junior member of this group in this underexplored region.

The Queensland factor – another potential catalyst

Drilling is expected to commence in the coming months and if assay results are similar to historic drilling this could be a further share price catalyst. 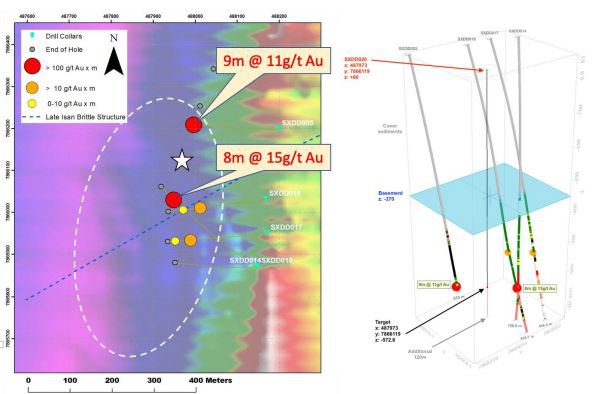 Like its South Australian prospect, Saxby is also positioned well, with gold major Newcrest exploring nearby.

Several JV partners are being scoped out and have already conducted a thorough due diligence, however until a suitable JV partner is found, SER will continue to fund the drilling itself. Importantly it has over $1 million in the bank to go towards the program.

SER certainly has a lot on its plate and it wears its ‘diversified’ tag with pride, which is why I like the company.

Plus, I haven’t touched on its heavy mineral sands play in WA which has a JORC 2012 Inferred Mineral Resource of 11.2 million tonnes grading 5.1% heavy minerals for a total heavy mineral content of 569,000 tonnes, which SER is developing in thriving market conditions adjacent to nearby miners who are running out of heavy mineral to mine. 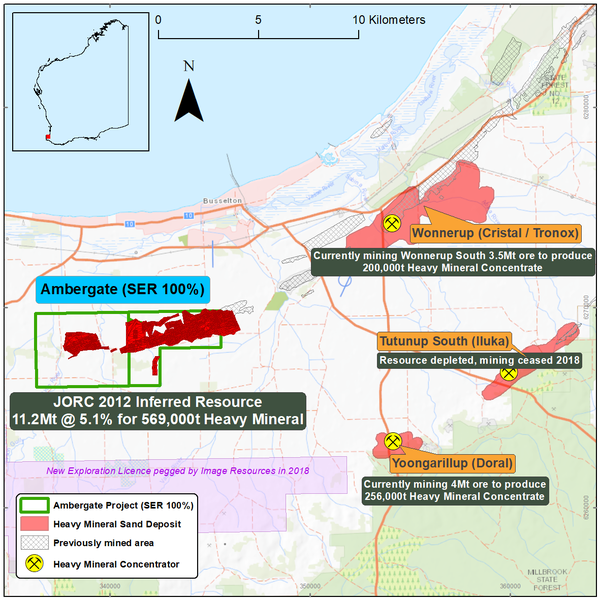 Nor have I mentioned its 15% stake in Ionic Industries who recently concluded an agreement with the $300 million Clean TeQ Holdings (ASX:CLQ) to commercialise a graphene-based water treatment technology.

That in itself should be enough to bring SER onto investors’ radars. But while it hasn’t yet, the farm-in with Fortescue could change everything for the company.

This is a major development, which could reap multiple near-term rewards.

Coupled with imminent drilling at Saxby and further catalysts to come from that, this could be a catalyst party for SER I, for one, will be watching the coming results very closely.