Disclosure: S3 Consortium Pty Ltd (the Company) and Associated Entities own 1,500,000 RAS shares at the time of publishing this article. The Company has been engaged by RAS to share our commentary on the progress of our Investment in RAS over time.

The $36M capped RAS’s lithium project that it is drilling now is immediately south of the $2.1BN Core Lithium deposit - and sits on the same type of geology.

RAS’s first drill hole has already been completed - and managed to hit a 35m downhole intercept of pegmatite recorded from just 16m depth below the surface.

RAS has the same type of outcropping spodumene bearing pegmatites that Core identified before it drilled out its project.

This is important because spodumene bearing pegmatites are the host rocks for almost all of the hard rock lithium production globally.

Another important part to the RAS story is managing director Jerko Zuvela’s previous lithium exploration success - Jerko helped take Argosy Minerals (capped at $654M) from explorer to late stage development and we’re hoping he can do a similar thing with RAS.

The pre-drill work completed to date has been behind RAS’s share price rising from ~6c to a high of 44.5c per share.

With the company’s share price coming off a bit from its recent highs to ~28c ( ~$36M market cap), good drilling results could be the catalyst for its next rerate.

Over the coming weeks we are watching for visual spodumene intercepts during drilling and then lithium above typically economic grades in assays. 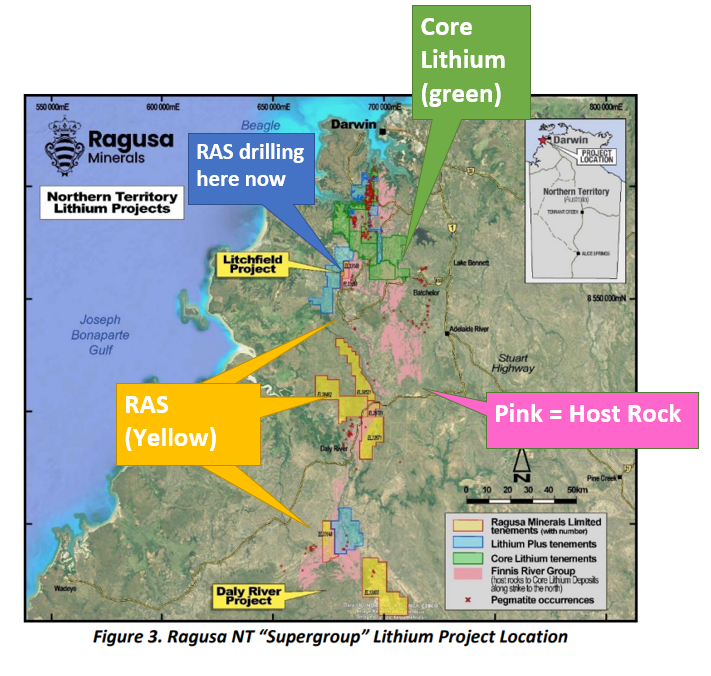 So how did RAS get here?

The previous owners of RAS’s project detailed “several distinct trends and many kilometres of untested strike length of pegmatites occurring within the leases” in 2018.

RAS now has untested outcropping pegmatites that have returned rock chip grades of up to 8.01% lithium and 23.1g/t gold, measuring up to ~30m in width at surface.

On top of all of this, it has also recently confirmed spodumene bearing pegmatites.

The presence of spodumene is particularly important because it is generally the host rock for lithium in a majority of the world's already operating hard rock lithium projects.

Where there is spodumene, the probability of making a high grade lithium discovery increases.

As it stands, Core’s market cap is over ~60 times larger than RAS’s, and we are hoping that RAS’s current drilling program is the first step towards changing this ratio for the better.

With drilling now underway, we hope RAS’s MD and biggest shareholder Jerko Zuvela can do something similar to the success he achieved (and continues to achieve) with Argosy Minerals (currently capped at $654M) - and that is by taking RAS from an early stage explorer to a lithium player with a well defined resource.

We think that with the lithium market continuing to be strong, if RAS does make a new lithium discovery, then the company’s market cap could rerate significantly.

This is central to our “Big Bet” for RAS.

That RAS will return 10x by discovering and defining a significant enough deposit to move into development studies for one of its projects.

NOTE: our “Big Bet” is what we HOPE the ultimate success scenario looks like for this particular Investment over the long term (3+ years). There is a lot of work to be done, many risks involved - just some of which we list in our RAS Investment Memo. Success will require a significant amount of luck. There is no guarantee that our Big Bet will ever come true.

For our summary of RAS’s progress over time and how today’s announcement contributes to our Big Bet see our RAS progress tracker. 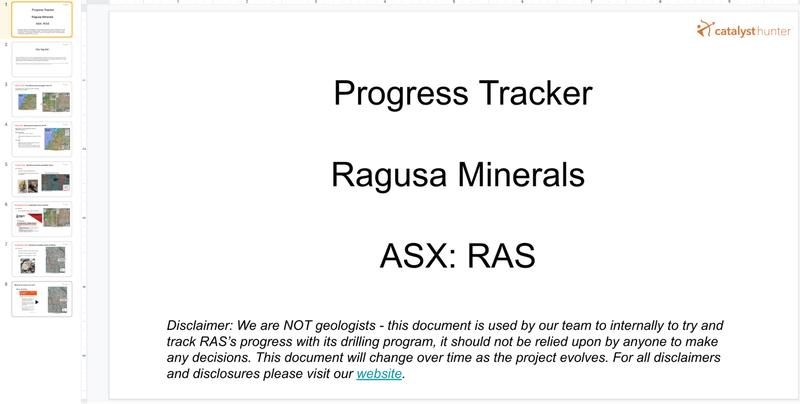 All that's left now is to drill the targets that RAS has put together.

Below is a map of the targets RAS will be drilling.

The GREEN represents the outcropping pegmatites, and the RED circles where RAS will be drilling. 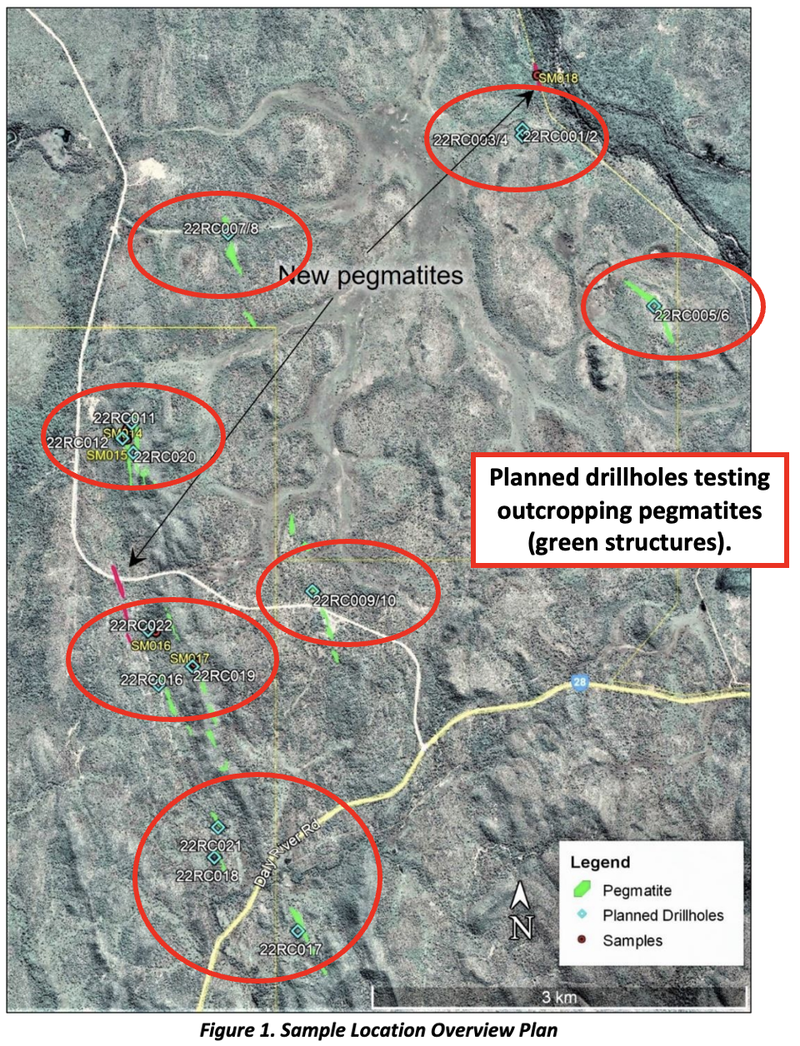 We are hoping RAS finds similar style success to our other portfolio company Latin Resources, which made a similar style spodumene hosted lithium discovery at its Brazilian project earlier this year.

Below is the market's response to Latin Resources’ discovery, which saw the company’s share price go up by almost 1,000%. 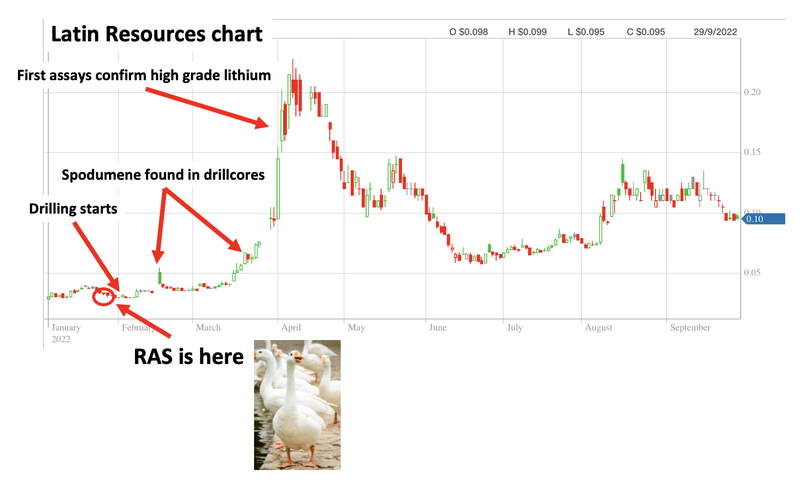 If RAS can deliver similar drilling newsflow, there may be a chance of a similar re-rate in the company’s share price.

How will RAS pay for the drilling?

Our ideal scenario is a less risky version of what Latin Resources achieved after going into a maiden lithium drill campaign with just $643k in the bank and some in-the-money oppies, delivering excellent lithium results, then raising $35M off the back of the resulting share price run.

The less dilutive raise at a higher post-discovery share price turned out to be a great result for shareholders.

We want to see is the RAS share price re-rate off material initial drilling assays, then execute a less dilutive raise at the higher share price, enough to fund the next few drill campaigns.

Obviously the condition precedent on this ideal scenario is a lithium discovery - which will solve capital raising problems one way or another.

We also note that RAS has ~70 million options that are all in the money at the current RAS share price.

If these “in-the-money'' options were to get fully exercised, RAS would bank ~$8.6M. 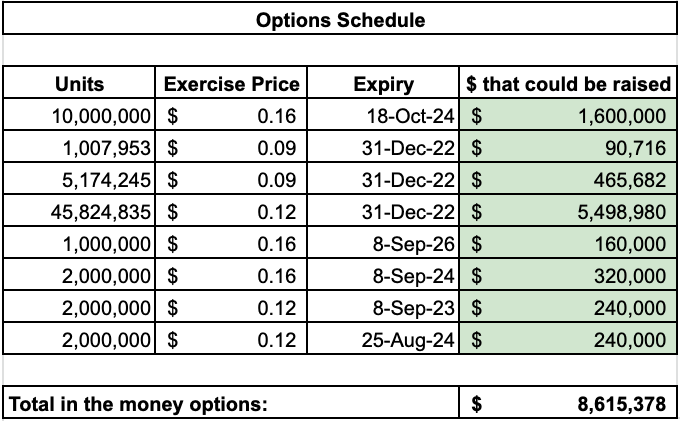 With a large portion of these expiring on 31 December 2022, there are only 3 full months left before they expire UNLESS the holders convert the options into shares.

Given that, RAS might hold out on raising capital until holders start converting them.

As with all of our exploration Investments, we like to see the company go into maiden drilling programs like RAS’s with a strong balance sheet so that if the results come back negative, the company has enough cash to do some more target generation work before looking to drill again.

In any case, we think a capital raise, whether it be through option exercises or a placement, would be a good move by RAS.

With drilling now underway we will be watching for the following:

We have set up expectations for the assays as follows: 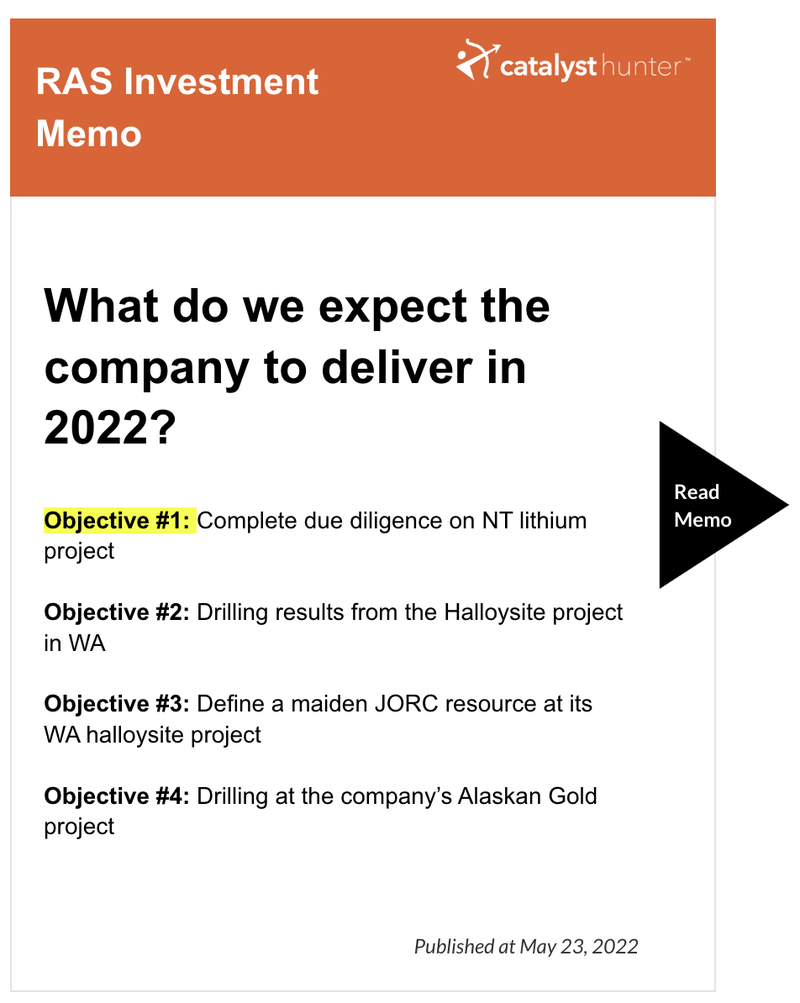 Below is our RAS Investment Memo, where you can find a short, high level summary of our reasons for Investing including the following: