Disclosure: S3 Consortium Pty Ltd (the Company) and Associated Entities own 2,400,000 RAS shares at the time of publishing this article. The Company has been engaged by RAS to share our commentary on the progress of our Investment in RAS over time.

Our exploration Investment Ragusa Minerals (ASX:RAS) surged yesterday on near record volume and no news.

Affectionately known by our team as “The Goose”, we think RAS’s sudden momentum could be a result of one of two things:

Whatever sparked the run on RAS shares yesterday, we are very pleased that after over a year of holding RAS it looks like it is finally getting market attention. 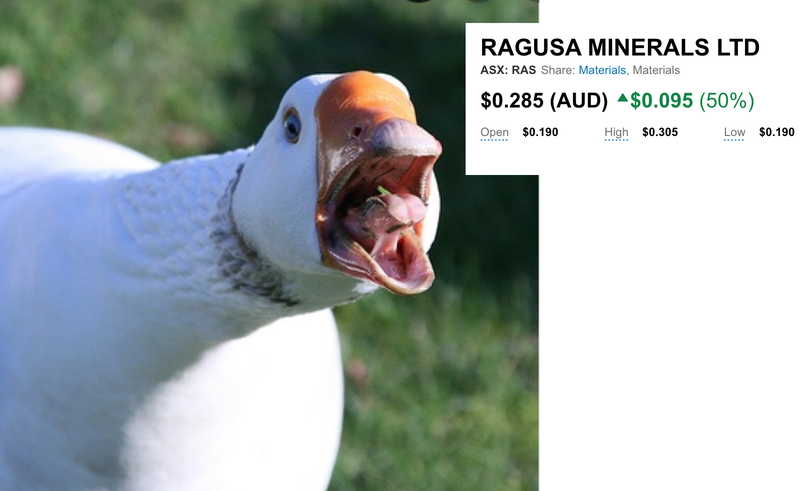 The ASX has also taken note, issuing RAS a speeding ticket this morning asking why the sudden interest in the stock, to which RAS responded:

Lithium stocks are soaring again and it comes as no surprise to us, given the resilience of lithium prices.

Lithium carbonate is trading at US$70,500/tonne, almost 300% higher than this time last year.

With this in mind, RAS is preparing to drill its hard rock lithium project in the Northern Territory.

RAS’s project sits in a part of the NT where it shares geological fundamentals with two larger capped lithium companies.

The first is Core Lithium (capped at $2.4BN) to the north of RAS’s ground, and the second is Lithium Plus (capped at $59M).

The difference in market caps is mainly due to RAS’s project being at a much earlier stage than its neighbours’:

RAS, on the other hand, has an early stage exploration prospect — it has not done any drilling yet, and is some time off from defining a JORC resource.

But it has recently completed another sampling program with peak lithium grades from historical rock chip sampling grading 8.03% lithium and 23.1g/t gold.

On top of this, the previous owners of the tenements in 2018 detailed “several distinct trends and many kilometres of untested strike length of pegmatites occurring within the leases”. 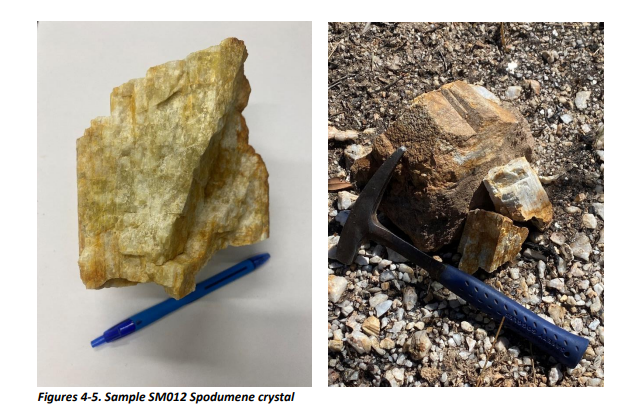 The significance of this is that spodumene is the source rock for most of the lithium produced today.

With work programs approved and RAS preparing to drill its project we think that if the drilling program can return similar intercepts to Lithium Plus or Core then it could quickly re-rate to a market cap more comparable to at least Lithium Plus.

We are backing RAS’s MD Jerko Zuvela to do what he did with now $500M capped lithium developer Argosy Minerals, and take RAS’s project from exploration prospect into a commercially developable lithium discovery.

With an enterprise value of $34.5M and RAS holding a larger landholding than both of its neighbours (~570km2) compared to Core Lithium’s ~500km2 and Lithium Plus’s ~490km2, we think that any exploration success from RAS will bring a lot of market interest to the company. 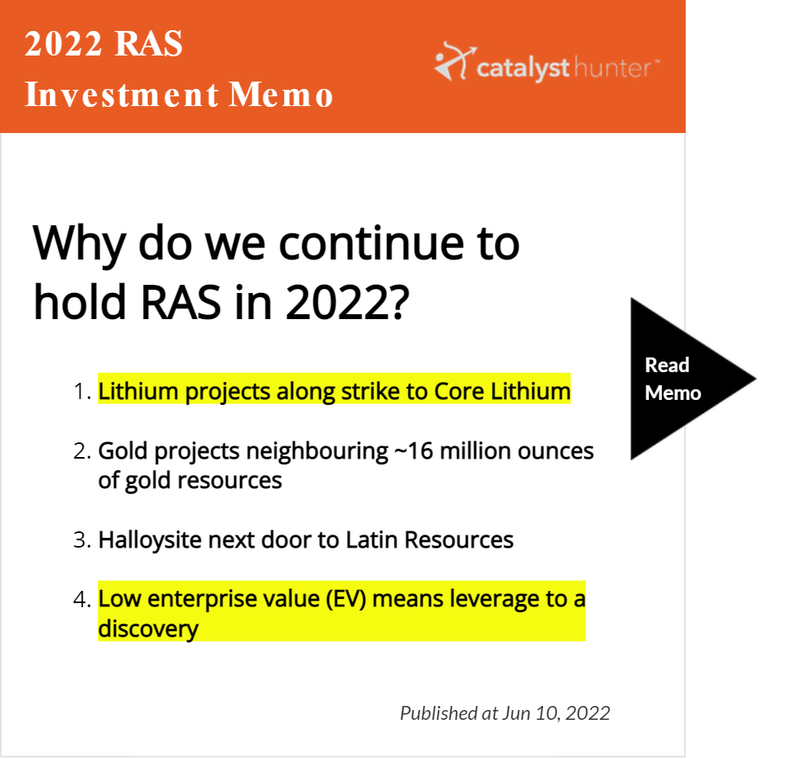 RAS’s neighbours in this part of the NT are Core Lithium and Lithium Plus. 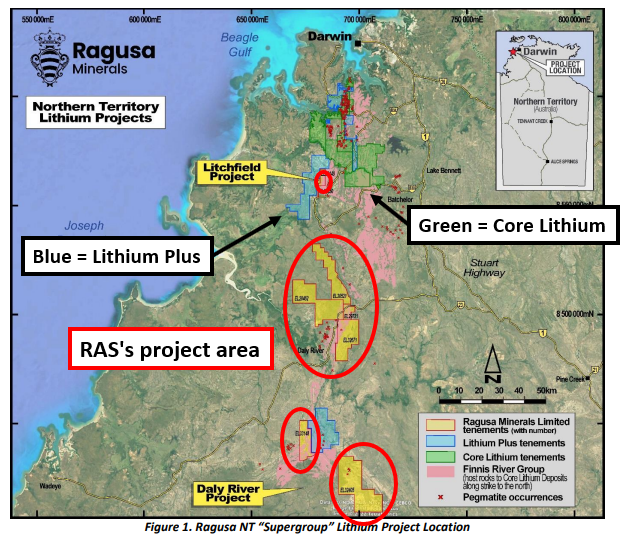 On the other hand, RAS trades at a market cap of $37M.

All three companies' projects sit over similar geology, all three have outcropping pegmatites scattered over their ground, and all three have confirmed lithium mineralisation either through drilling or in rock chips.

The difference in valuation for the three companies is primarily a result of where each of the companies is at in terms of their projects lifecycle.

Core is RAS’s most advanced neighbour, with an existing JORC resource of 18.9mt at a lithium grade of 1.32%.

Inside this resource, Core has already defined an ore reserve of 10.6mt @ 1.3% and has started building its mine, with first production scheduled for Q4-2022.

This sets the scene for the sort of potential upside in this part of the NT and points to how the market might value a large new discovery. Effectively, Core set the standard for how a new discovery in this region could be valued.

Second is Lithium Plus.

Lithium Plus only recently listed on the ASX and has no existing JORC resource.

At this stage, Lithium Plus’ project had a single discovery hole drilled in 2017 which intercepted spodumene bearing pegmatites over a 12m intercept with lithium grades of 1.42% from 121m.

Only a few months after its IPO, Lithium Plus is now drilling to follow up on that discovery hole with a 10,000m RC drilling + 1,800m diamond drilling program.

We expect the drilling program to bring more interest to the region if Lithium Plus reports any success.

With Lithium Plus currently trading with a market cap of $59M, the market seems to be valuing the discovery hole alone ~1.6x higher than RAS’s current market cap.

Where is RAS at with its project?

RAS holds the largest landholding of the three companies and, similarly to its neighbours, has outcropping pegmatites scattered all over its ground.

RAS’s project also has historic exploration data with a soil/rock chip sampling program from 2016-17, returning lithium grades of ~8.03% and gold grades of ~7.3g/t.

The last exploration done at the project was back in 2018 when further rock chip sampling by previous owners PNX returned lithium grading 7.25% and gold grades of 23.1g/t.

At the time, PNX reported “several distinct trends and many kilometres of untested strike length of pegmatites occurring within the leases”.

This is where we think RAS has seen the upside.

If RAS can deliver exploration success in its upcoming drilling program, we expect the market may bridge the gap to at least Lithium Plus’s $59M market cap and even possibly higher, depending on the grades and width of any discovery intercept.

The big upside is if RAS can prove out a giant JORC resource and begin to position itself to be compared to Core Lithium at $2.4BN.

The obvious caveat here is that RAS is yet to drill its project, and all of this upside potential is contingent on exploration success.

As with all of our exploration Investments, we understand that there is no guarantee of discovery when a company undertakes a drilling program.

There is always a chance that drilling returns nothing and the company has to then re-work its exploration strategy.

What about RAS’s other projects?

With RAS focusing on its NT lithium projects it doesn't mean we have forgotten about its other projects.

RAS’s neighbours have ~16 million ounces of gold resources between them in the region and a combined market cap of more than $367M.

Of particular interest are Nova Minerals recent drilling results from its 1.5m ounce RPM gold project, right near the tenement border of RAS. 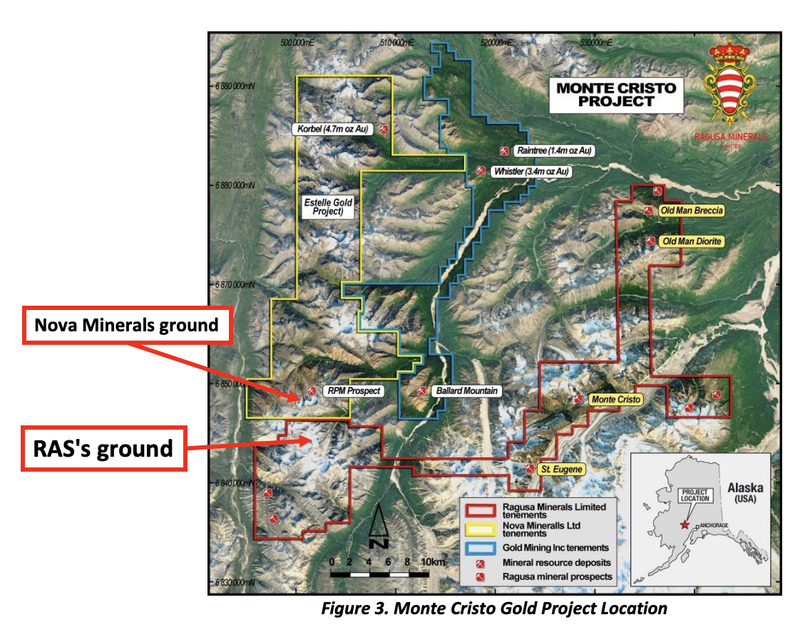 With a 23mt @ 2g/t gold for a 1.5 million ounce gold resource, at today’s gold prices the project is considered relatively high grade.

What’s really interesting, is that Nova’s discovery is open to the south, which trends towards RAS’s grounds. 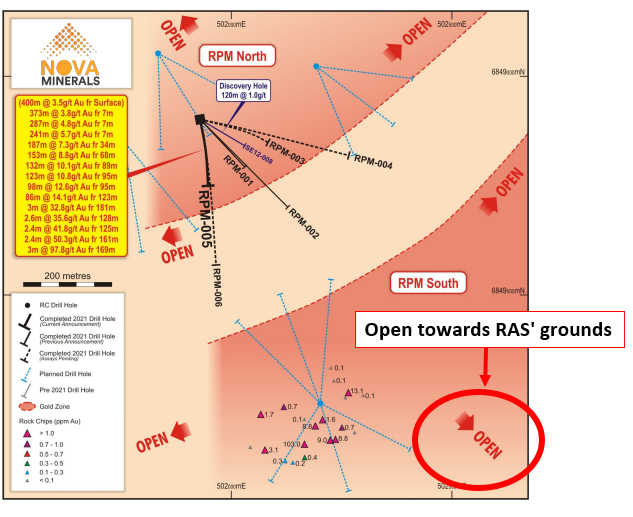 With Nova currently drilling its RPM discovery, we will be watching to see if the good results continue and if they trend towards RAS’s ground.

If the gold intercepts continue to the south, we expect to see some market interest on RAS as a nearology exposure.

We note that Nova Minerals are currently drilling to the south so we will keep an eye on the assay results that Nova put out.

To see our deep dive on RAS’s gold projects, check out our previous article here and scroll down to the section titled “Our Quick Guide to Nearology - what does Nova’s results actually mean for RAS?”

With the terms all agreed, we now want to see RAS complete its due diligence work and finalise a decision to proceed with the farm-in agreement over the newly acquired lithium projects.

Granting of the two lithium projects in the NT 🔄

We still want to see the remaining exploration licence applications granted across RAS’s lithium project in the NT.

We set the exploration of the gold projects as key objective #4 in our revised 2022 RAS Investment Memo, so ideally we would see RAS detail its plan for these projects soon.

We will be watching the activity of its neighbours in the meantime.

We suspect the assays from the program shouldn't take longer than 8-10 weeks from drilling being completed.

To see our deep dive on this drilling program read our last note here: RAS Now Drilling for Halloysite - Directly Next to Open Resource.

With drilling being done right on the border of RAS’s tenements and our other Catalyst Hunter portfolio company Latin Resources’ 207mt halloysite resource, we set the following expectations:

What could go wrong?

At present, we see two major risks present for RAS.

At present RAS has interesting drill targets, but these do not completely de-risk the chance that drilling returns nothing.

If the drilling program returns no mineralisation, RAS will need to go back to the drawing board and we expect its share price would fall significantly.

RAS may need to shore up its balance sheet to finance the upcoming drilling program - however we still don't know much about what is being planned yet.

On that front, we note that the company has ~70 million options that are all in the money at the current RAS share price - of particular note is the large tranche in escrow until the 1st of October this year.

If these currently “in-the-money'' options were to get fully exercised, RAS would raise ~$8.8M.

The caveat to this is that ~47 million of these are escrowed until the 1st of October 2022, so the holders will need to wait until closer to the expiry date before making a decision on exercising them.

We will be watching to see if any of these options start to get exercised between now and the drilling program starting.

As with all of our exploration Investments, we like to see the company go into maiden drilling programs like RAS’s with a strong balance sheet so that if the results come back negative, the company has enough cash to do some more target generation work before looking to drill again. 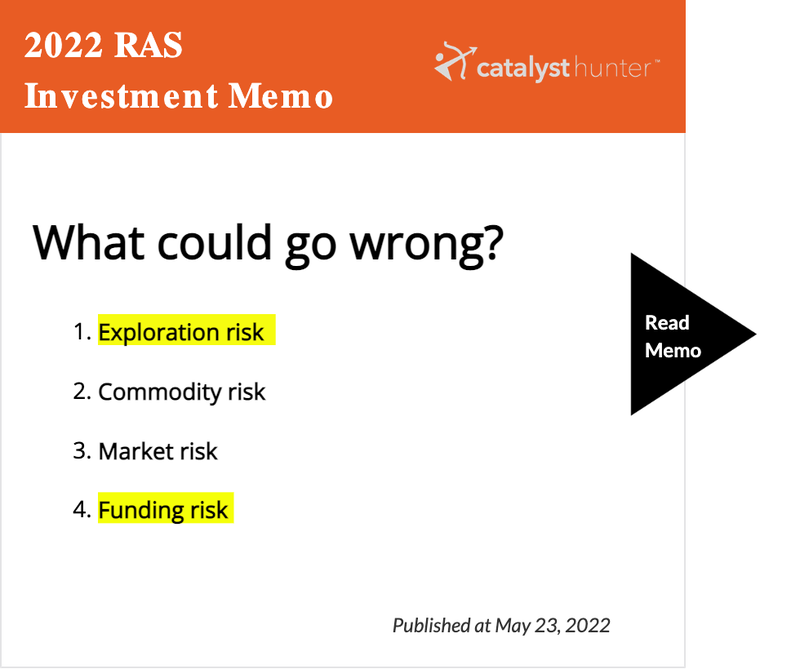 Below is our revised 2022 RAS Investment Memo, where you can find a short, high level summary of our reasons for investing.

Disclosure: S3 Consortium Pty Ltd (the Company) and Associated Entities own 2,400,000 RAS shares at the time of publishing this article. The Company has been engaged by RAS to share our commentary on the progress of our Investment in RAS over time.