PMY Drilling For Copper-Zinc Now: Results Due in Weeks

The $3.7M capped micro cap stock Pacifico Minerals Limited (ASX:PMY) is in the midst of a diamond drilling campaign in a world class base metal district in the Northern Territory of Australia.

PMY is exploring in an impressive post code, given its neighbours include none other than the £49 billion-capped London-listed Glencore and Teck Australia.

PMY is in a joint venture arrangement with the heavy-hitting, $1 billion-capped Sandfire Resources (ASX: SFR). Importantly, Sandfire is contributing its own share of exploration costs to the tune of 49%.

The Northern Territory’s McArthur Basin not only hosts Glencore’s McArthur River Mine, but is also in the vicinity of Teck Australia’s world class Teena zinc-lead deposit where 58Mt of 11.1% Zn and 1.6% Pb was recently discovered.

Parent company Teck is another global powerhouse with a market cap of over $13 billion, so there is certainly something about the region that is attracting the majors.

Whilst PMY has several projects on the go across Australia and as far away as Colombia, its central focus is on progressing the Borroloola West Project in the Northern Territory which is prospective for several base metals.

Borroloola West is the project that PMY has just launched a 1,500m diamond drilling campaign on, hunting for a smorgasbord of metals including cobalt, zinc, copper and silver, across a suite of pinpointed targets.

PMY has operational control and 51% ownership of the the Borroloola West Project and had $1.6 million in cash reserves at June 30, 2017.

Its project has also captured the attention of the Northern Territory government as a worthy recipient of funding to assist with the company’s exploration. Funds delivered by the NT government are contributing to the current diamond drill program.

A significant leadership team is at the helm including Managing Director Simon Noon, who was the Executive Director of ASX listed Groote Resources Ltd, where he managed the company from a market capitalisation of under $5 million to market highs in excess of $100 million.

Whether PMY can repeat this feat remains to be seen, so investors should seek professional financial advice if considering this stock for their portfolio.

PMY has hold of an 1,800km 2 underexplored land package in a highly prospective region of the Northern Territory.

Here’s a look at the region in which PMY is playing: 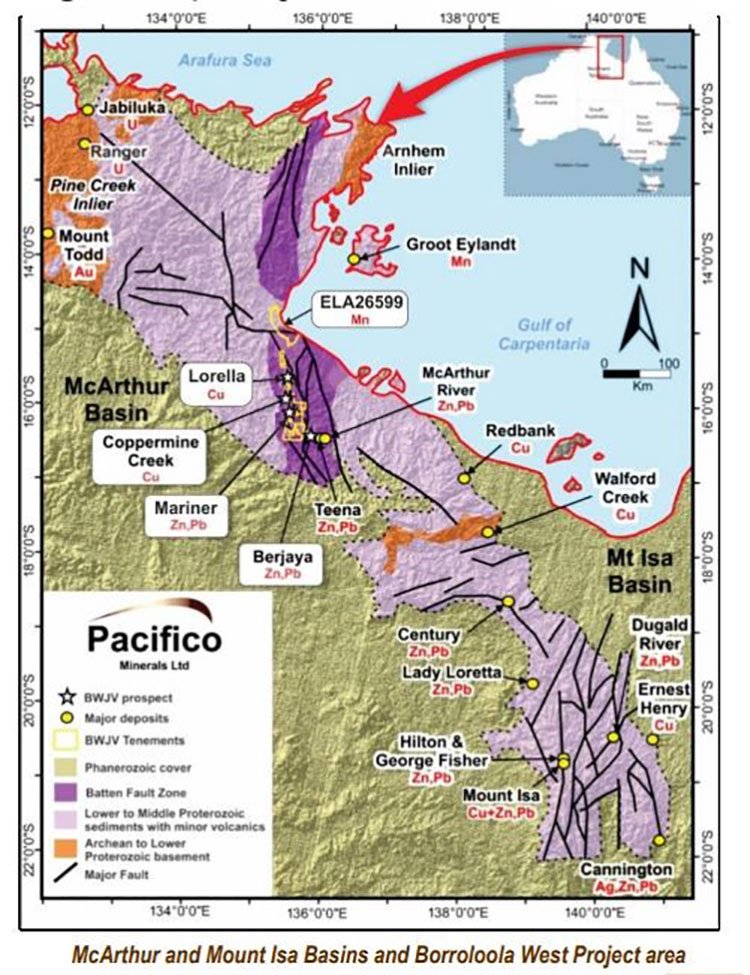 The following map gives you an indication of the Borroloola West tenements (in grey) and the location of its prospects, the 12 exploration licences and the mining licence: 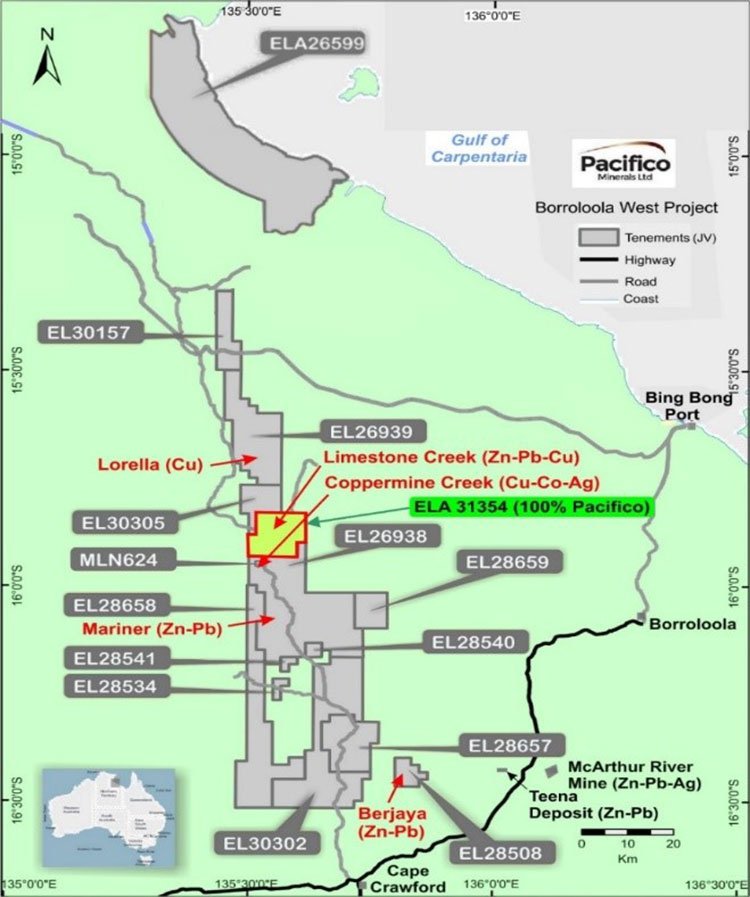 The company recently began a drilling programme at Borroloola across 5 drill holes for 1500m at three of the company’s prospects where copper and zinc targets have been established.

The zinc target occurs in the same stratigraphic rock sequence (Barney Creek Formation) as the world-class McArthur river zinc-lead-silver deposit, and lies 30km along strike to the west.

Significant stratabound copper mineralisation intersected by PMY at Coppermine Creek has given the potential for a major copper discovery.

Following the diamond drilling program, an aircore drilling program is planned to commence this field season to test for primary and additional oxide copper mineralisation at the company’s Lorella prospect.

That means plenty of newsflow to grab the market’s attention.

As we highlighted above, the Borroloola West Joint Venture between PMY (51%) and Sandfire Resources (49%) consists of 12 exploration licences and one mining licence over 1,817 square kilometres.

Coppermine Creek is situated 100km north-west of the McArthur River zinc-lead-silver mine where the target is a Mount Isa Copper style deposit.

Copper mineralisation can be observed at surface as outcropping gossans with malachite staining over a strike length of at least 1.5 kilometres based on drilling, recent geological mapping and sampling.

Massive sulphide veins with high copper grades have been intersected by previous drilling in a thick horizon within the Amelia Dolomite of intense fracturing, brecciation and alteration.

A ground electromagnetic (EM) survey has been recently completed over part of the prospect.

Below is a map of Coppermine Creek, showing just part of the area underlain by the target mineralised horizon: 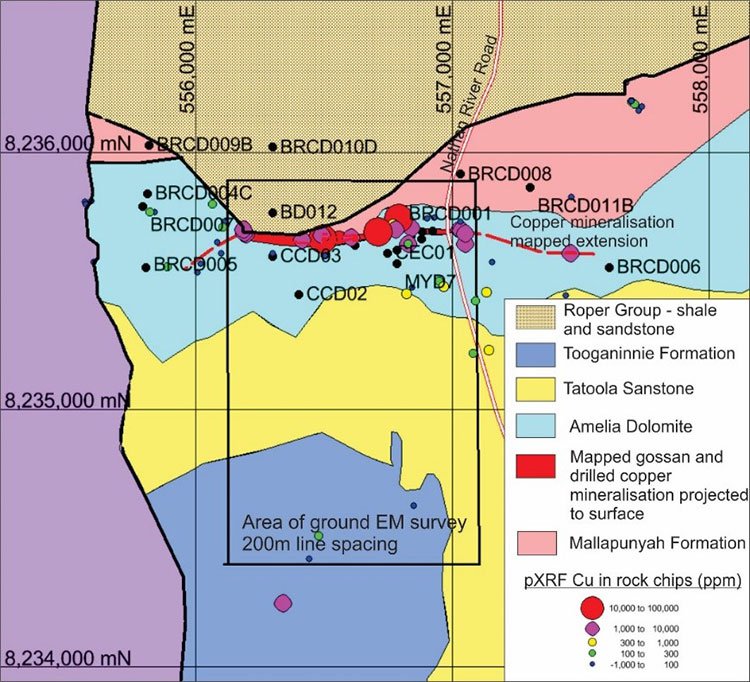 Here’s a quick look at PMY’s other prospects within Borroloola West.

Two diamond drill holes are being targeted to test for both zinc mineralisation and favourable stratigraphy.

The Berjaya Prospect lies west and northwest of the McArthur River zinc-lead mine.

One diamond drill hole is planned to test a Versatile Time Domain Electromagnetic conductive horizon that appears to correspond to the position of gently dipping Barney Creek Formation beneath Hot Springs Formation.

A planned aircore drilling programme (40 holes for 2000m) to get underway during September.

Limestone Creek is PMY’s 100% owned prospect and is covered by an exploration licence application. Once the licence is granted RC drilling to test strike extensive gossanous breccias containing high lead and zinc geochemistry, is planned.

A diamond drilling program has begun at PMY’s Northern Territory operations, specifically at Coppermine Creek, Mariner and Berjaya – assay results will be released in the weeks to come.

Following that, aircore drilling is planned to commence at Lorella should PMY see positive results from metallurgical testwork.

An update assessing the potential copper oxide ore resources with metallurgical testwork on Lorella Copper oxide material is due in the third quarter.

Borroloola West has been the primary focus of this article, but PMY has several other irons in the fire in Australia and overseas in Colombia that could also create potential catalysts in the near future.

Of course it is early days for PMY and investors should seek professional financial advice if considering this stock for their portfolio.

All up, there is a huge volume of news due to flow over the coming twelve months... including plenty of catalysts to draw investors’ attention.

How long will PMY maintain a market cap of just $3.7 million...?