Kairos Minerals (ASX:KAI) has been riding a newsflow wave recently, particularly in relation to its highly prospective Roe Hills Project in Western Australia.

At a glance, this project shows considerable promise.

Located 120km east-south-east of Kalgoorlie in WA’s globally renowned Eastern Goldfield region, the project is situated next door to and over the same geology along strike to the south of Breaker Resources’ (ASX: BRB) Lake Roe gold discoveries.

Bear in mind that BRB’s Lake Roe gold discovery was responsible for pushing the company to a $90 million market cap in a very short space of time.

Importantly, BRB is just eight months ahead of KAI in terms of progress, but the $7.7 million capped KAI has already exceeded BRB’s current drilled depth and mineralisation.

Could KAI produce a similar find and produce its own significant new goldfield?

Time will tell – and that would be a catalyst in itself – but the numbers at this stage are highly encouraging.

Of course, if considering this stock for your portfolio, you should take into account your own personal circumstances and risk profile and seek professional financial advice.

Highly positive results were determined in early July this year.

Now just weeks after this high-grade cobalt discovery, KAI has announced that new high-grade primary gold zones have been discovered at Roe Hills.

Let’s look at this latest drilling in more detail:

The Catalyst: Positive assay results and more due in coming weeks 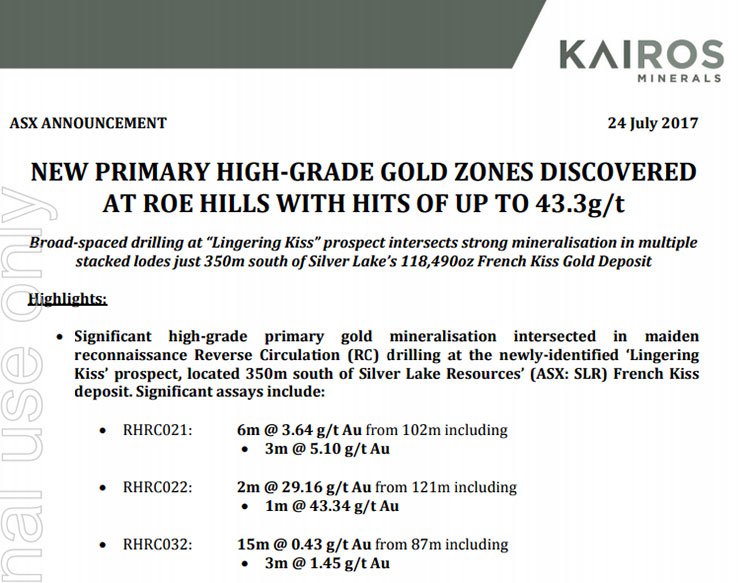 They each intersected multiple zones of significant primary gold mineralisation, including very high grade intervals (greater that 1 oz/t gold) within broader low-grade mineralised envelopes. The wide-spaced drilling was completed along a single section, circa 250 metres in width, with the mineralisation remaining open in all directions.

You can see the drilling locations laid out in the map below: 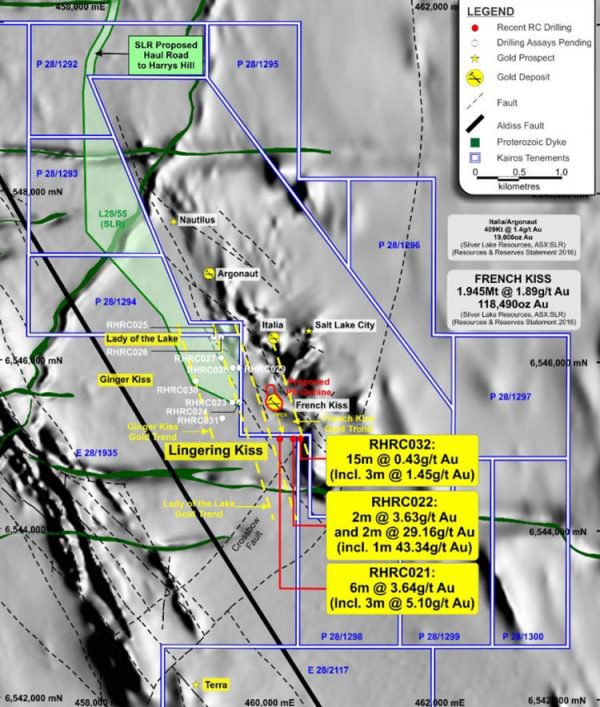 Preliminary indications are that the gold mineralisation intersected at Lingering Kiss represents the southern extension or repetition of the French Kiss deposit.

Assay results from the balance of the recently completed 2,800m gold drilling program at Roe Hills are expected in the coming weeks, where a number of high-priority gold targets have been investigated.

The Roe Hills project is situated within the Southern Kurnalpi Terrane of the Eastern Goldfields in WA — a rapidly emerging and highly prospective gold province. The region is currently enjoying significant investor interest and exploration activity, with a cluster of important gold discoveries by Silver Lake Resources and Breaker Resources.

The Lingering Kiss results add to the known extensive gold endowment within the project, which is not only in close proximity to the French Kiss deposit, but also just south of Breaker Resources’ (ASX: BRB) emerging Lake Roe/Bombora discovery.

And, as we alluded to earlier, KAI is already in a better position than BRB was at the same of exploration.

BRB went from a sub-$10 million market to over $90 million today.

Can KAI do the same? Time will tell.

However at the same time, this stock is speculative and investors should consider all public information not just the information in this article and seek professional financial advice before making an investment decision.

The project’s location ­— and intriguing proximity to the two key Silver Lake and BRB discoveries — is made clear in the map below: 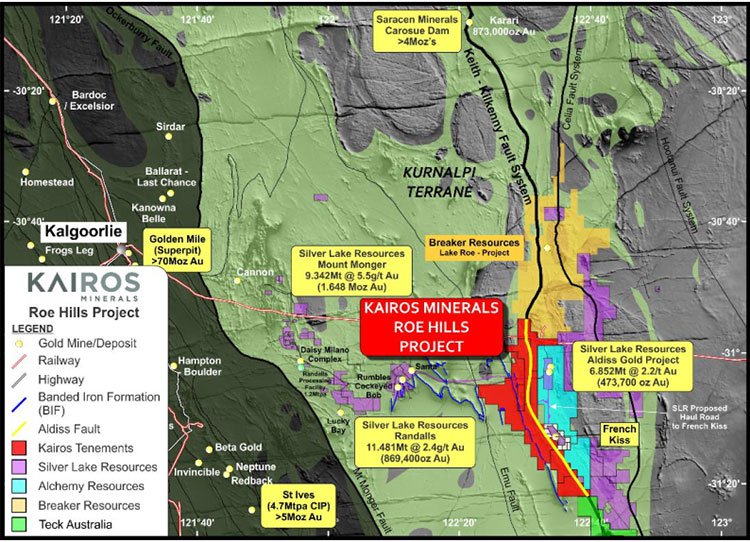 Bearing all this in mind, this area can certainly be considered highly prospective.

Lingering Kiss also represents an essential new addition to the growing pipeline of abundantly mineralised zones recently identified by KAI at Roe Hills, all of which offer strong potential for the near-term definition of significant gold resources.

The result is a valuable milestone for KAI at Roe Hills and has a number of things going for it:

Coming up with strong primary mineralisation of significant grade over multiple stacked lodes is a confidence-boosting achievement. It also provides an immediate focus for KAI’s team as a near-term resource development opportunity.

Also of potential advantage for KAI is the fact that the Roe Hills project has experienced little exploration activity, despite having widespread mineral endowment.

Given these results and the excellent progress made by Breaker Resources and Silver Lake Resources in the same region, the pending results expected in the coming weeks are decidedly anticipation-worthy, and these should assist the company in shaping the next phase of exploration.

KAI controls a continuous 40 kilometre strike length of the same prospective package which hosts Breaker Resources’ discovery to the north, with the company now aiming to target areas that will provide the most optimal chance of making a world-class discovery.

Whether this happens or not is speculative at this stage, so investors should approach any investment decision with caution.

Plenty of news flow has also come out of KAI’s other projects that span gold, lithium, cobalt and nickel, making for a pleasingly diversified portfolio.

Yet, the immediate potential catalyst is the current assays and further results to come out of Roe Hills — results that could translate to a share price rerating for KAI.