Disclosure: The authors of this article and owners of Catalyst Hunter, S3 Consortium Pty Ltd, and associated entities, own 12,823,582 FNT shares at the time of publication. S3 Consortium Pty Ltd has been engaged by FNT to share our commentary and opinion on the progress of our investment in FNT over time.

Since we took a position in Frontier Resources (ASX:FNT) in February, the company has rapidly been preparing for its first ever rare earths drilling program.

EM surveys are done, as is rock chip sampling, and a drill rig has now been secured as FNT prepares to drill in the Gascoyne region of WA.

Yesterday we learned the scope of FNT’s drilling program that is set to kick off in late-April/May.

FNT plans to complete 5,000m of drilling across 65 holes to an average depth of 75m.

This will be completed with a heavy RC drill rig that is capable of drilling deeper, should FNT intercept any targets of interest.

We think this type of drilling is appropriate given what we know about the FNT tenements so far: FNT has no fewer than 30 EM targets, and high grade rock chip samples to work with.

With lots of holes, FNT can use this data to make better decisions in follow up drilling campaigns.

Next, in the lead up to drilling, is heritage surveys and permitting.

FNT announced yesterday that it has now been awarded the drilling contract and the drill rig has been secured. It also mentioned that it will investigate “circular carbonatite bodies”.

These are the same type of rock bodies that are found at Lynas’ Mt Weld, one of the highest grade rare earths deposits in the world.

However, as FNT is an early stage exploration company, an investment doesn’t come without a high degree of risk. Although, FNT and other critical minerals companies are backed by significant macro theme momentum.

That funding is on top of a previous $294M allocation to critical minerals, part of a larger $2B initiative launched last year.

In light of that news, here’s how we’ll approach it in today’s note: 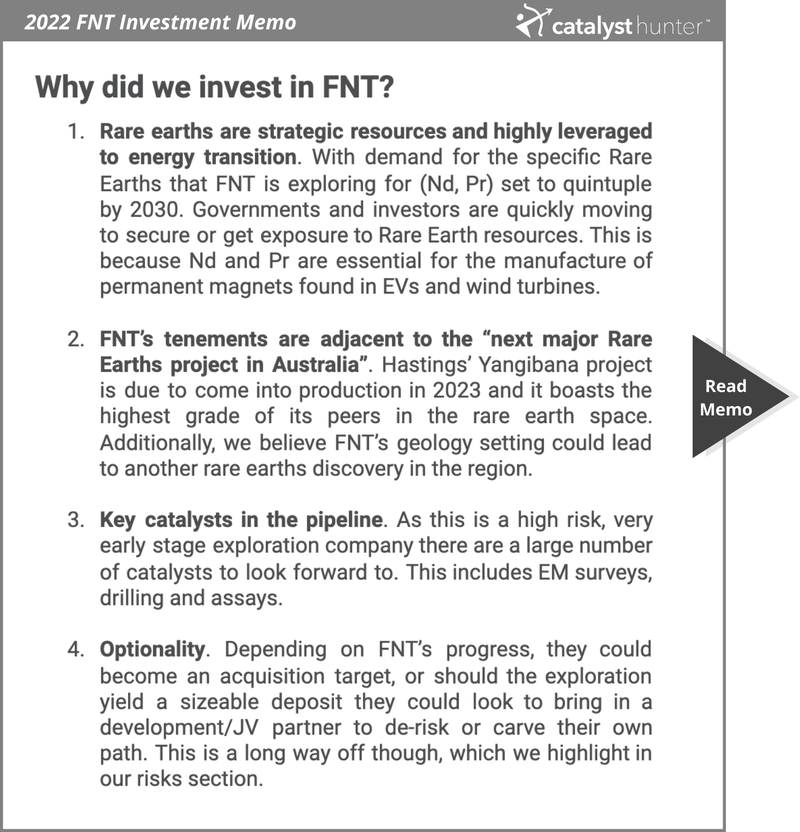 More on the announcement yesterday and why it matters

The biggest positive from yesterday’s announcement is that FNT has executed a drilling contract well ahead of its planned drilling program set for ~late April-May.

FNT have moved quickly and secured the RC rig in advance of all of the heritage surveys and permitting works that are required before drilling can begin. That means FNT can mobilise the drill rig and get it turning as soon as approvals are in place.

This gives us confidence as exploration teams all around the world, including in WA, are working at capacity and many explorers are finding it hard to secure drilling rigs.

With yesterday’s announcement, FNT confirmed that its maiden drilling program would be a ~5,000m, 65 hole program with each hole reaching an average depth of ~75m.

The drilling will be done with an RC drill rig. This shows that FNT are confident with the targets that they identified via the geophysical surveys and recent rock chip sampling, which we covered previously.

Below are images from our previous notes on FNT, where the high priority targets were picked up during target generation works.

No drilling locations have been confirmed as yet, but we suspect FNT will target these anomalies. 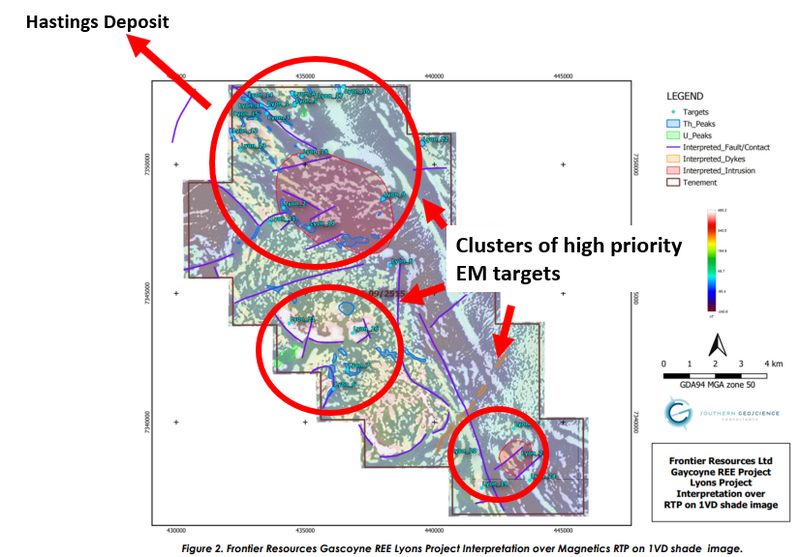 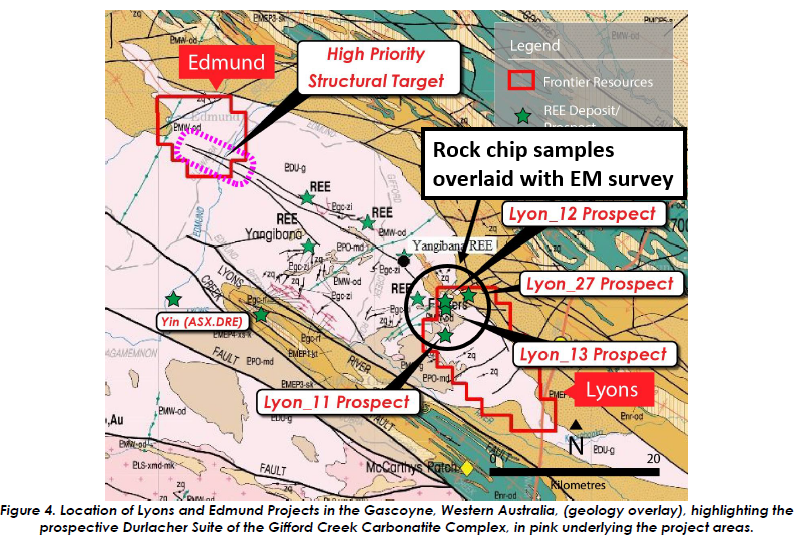 For us, a key takeaway from the drilling contract announcement is the average depth that FNT will be drilling down to.

Generally an average depth of ~75m would be considered relatively shallow, especially for an RC drilling program.

But we looked at FNT’s neighbour, Hastings Technology Metals’ deposit, to see how its orebody looks and at what depths most of its JORC resource sits.

Hasting’s project is made up of several smaller orebodies that come together to make up the larger project area. Its biggest individual orebody is the “Bald Hill deposit” which has a 6.25mt @ 0.98% TREO JORC resource.

Notably, the Bald Hill orebody is shallow and sits at a maximum vertical depth of ~80m below depth. This points to the appropriateness of the targeted depth of FNT’s drilling program.

Importantly, FNT’s high priority targets at the “Lyons” prospects sit right on the border where the Bald Hill orebody is, on the Northwestern corner of the FNT’s grounds. 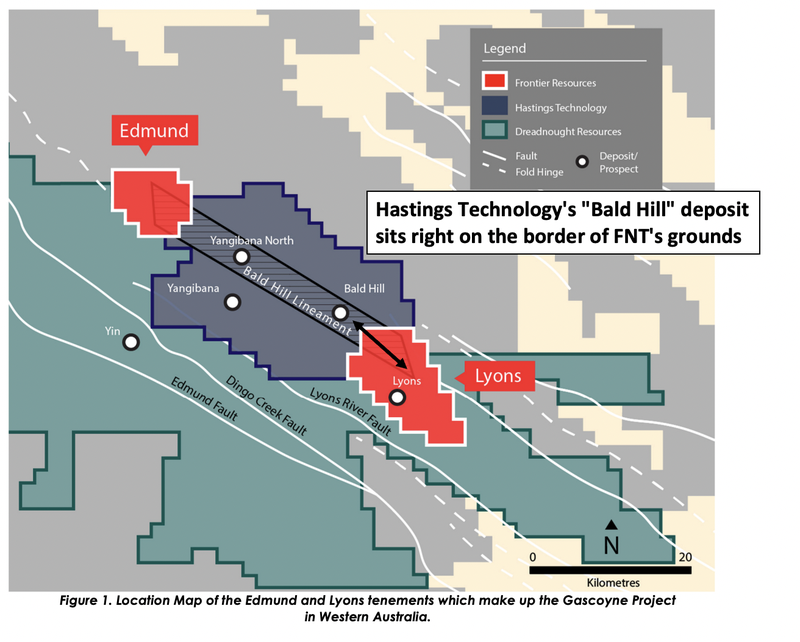 Having an RC drill rig onsite will also mean FNT has the option to continue drilling at depth should it hit something interesting whilst drilling down to the targeted ~75m depth.

We like that FNT is focussing more on covering a larger footprint of its project with more holes and lower depths versus fewer holes at greater depths.

With this being FNT’s first time drilling its project area, the more drillholes the company puts into the ground, the higher the probabilities of hitting something interesting.

If or when those targets are identified, FNT can then bring back the rigs and drill and hone in on any high grade intercepts or correlate the various data points to target new areas of interest.

What’s next for the drilling program?

In yesterday’s announcement, FNT confirmed that the heritage surveys are in planning and applications for the necessary permits have been submitted.

We expect to see news from these over the coming weeks before the drill rig can begin mobilising on site for the drilling program targeted for April-May of this year.

Of course it is hard to predict the timing of the permitting process and we have seen it happen many times before where this process gets dragged out and there are weeks/months of delays in getting approvals.

Drilling locations to be finalised 🔄

FNT confirmed that the drilling program would be following up on ~30 interesting targets that came about during the geophysical surveys run over the project area as well as the recent rock chip sampling program which produced samples with TREO grades up to 8.1%.

We covered the results of both of these programs in our previous notes which can be read here:

The next step will be for FNT to outline the drilling locations, which we expect to happen closer to the start of drilling.

All of this means FNT that are now making progress towards ticking off Objective #2 from the what we want to see the company achieve in 2022 section of our 2022 FNT Investment Memo, which can be seen below. 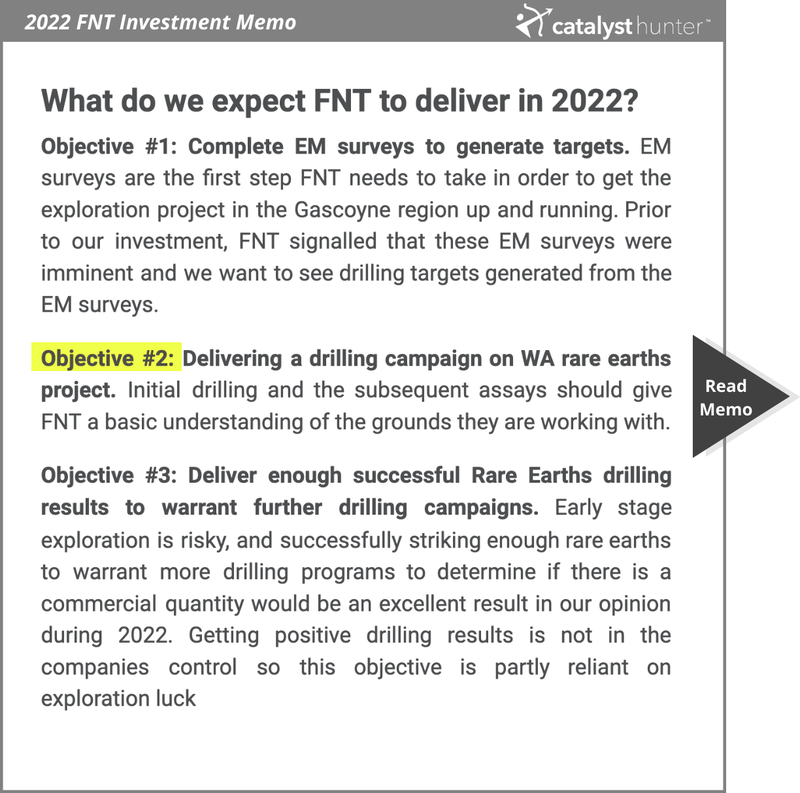 Our early coverage of FNT was primarily focussed on the ironstones on their tenements, which look like this:

But FNT has also mentioned the presence of circular carbonatite bodies from EM surveys.

This could be particularly interesting. Here’s why:

According to the US Geological Survey, “for nearly 50 years, carbonatites have been the primary source of niobium and rare earth elements (REEs), in particular the light REEs, including La, Ce, Pr, and Nd. Carbonatites are a relatively rare type of igneous rock composed of greater than 50 vol % primary carbonate minerals, primarily calcite and/or dolomite, and contain the highest concentrations of REEs of any igneous rocks.”

Again, we are primarily invested in FNT for a Neodymium (Nd) and Praseodymium (Pr) discovery - the two rare earths used in the permanent magnets found in EVs and wind turbines.

Neighbouring companies Dreadnought Resources and Hastings Technology Metals have found Nd and Pr on their tenements. Indeed, Hastings is widely considered to be the next producer of Nd and Pr on the ASX.

The below image shows how a “circular carbonitite body” forms the outline of the Lynas Mt Weld deposit (carbonatite is the green circle around the border of the deposit): 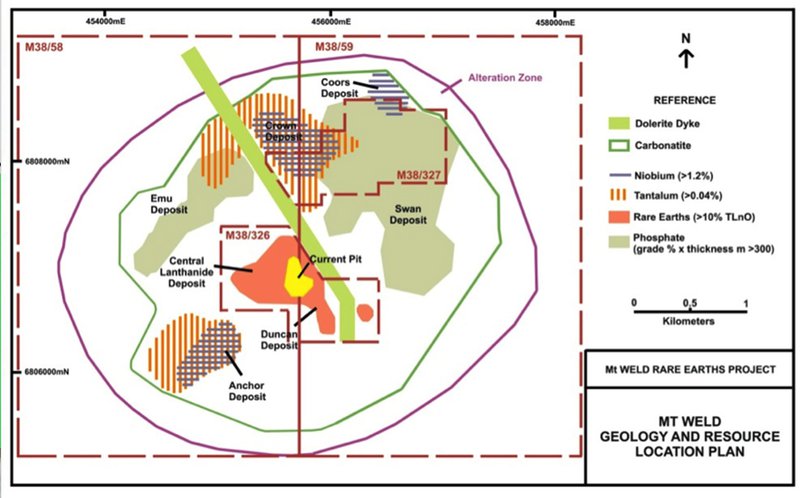 Now we’re in no way saying FNT is going to make a Mt Weld sized discovery on their tenements. But what we are saying is that the geology lends itself to a discovery of some form... particularly after those high grade ironstone rock chips came in.

All of this comes at a time where interest in rare earths has never been higher. 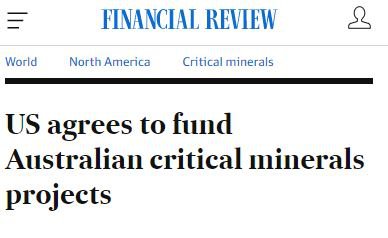 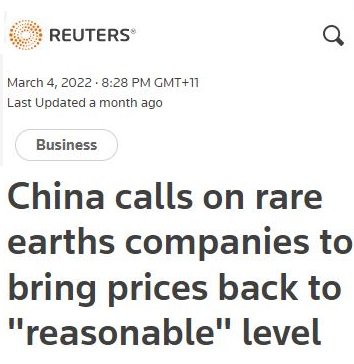 Here’s all our previous coverage of FNT:

As we stated at the start, FNT is a high risk exploration company and we’ve identified the following risks: 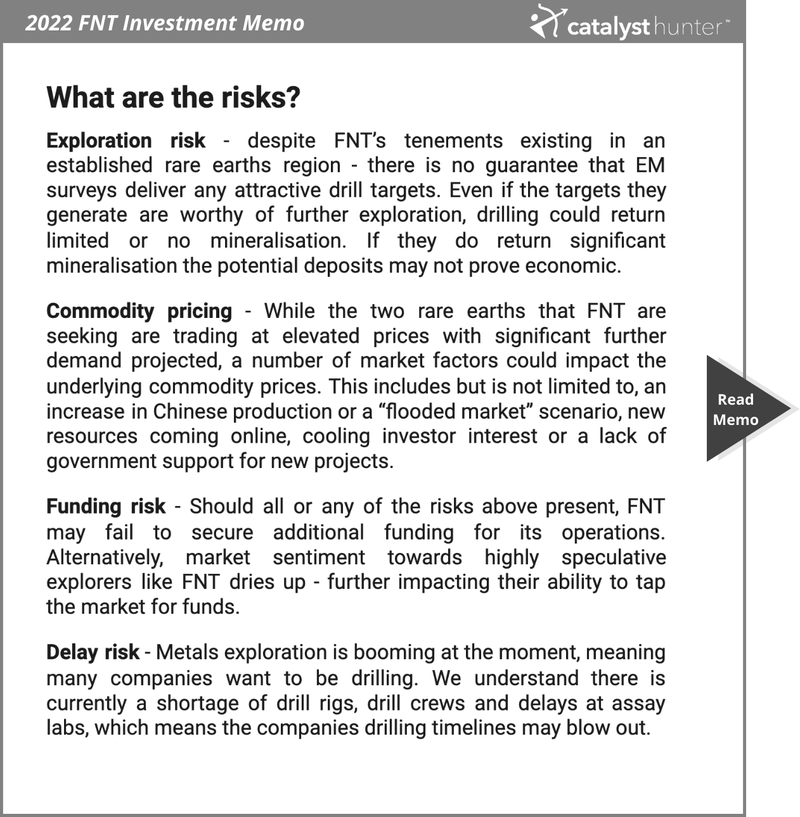 And below is our 2022 Investment Memo for FNT where you can find a short, high level summary of our reasons for investing.

The ultimate purpose of the Investment Memo is to track the progress of our portfolio companies throughout 2022 using the objectives set in the memo our benchmark.