The news sent the AKN share price to as high as 31c this morning - not bad considering AKN was sub 20c just a couple of weeks ago when we first initiated coverage.

Now normally, a big intercept like this would be enough to send the share price of a junior explorer to multiples of where it was trading before the news, but the difference with AKN is that this is an “in-fill” drill result. It’s not an entirely new discovery.

However the shallow part of the resource - that could be put into production quickly via an open-pit mine - is made up of “oxide hosted” copper mineralisation.

The purpose of the current in-fill drilling program is not to go and make a new copper discovery but to try and improve a company’s understanding of the part of a deposit they already know is full of copper.

AKN’s shallow “oxide ore” is considered complex to process, and with AKN’s resource in particular, previous attempts to find a processing solution have proven difficult and uneconomical.

In AKN’s case, the specific purpose of this drill campaign is to get the samples out of the ground and send them to the metallurgical test work labs to try a newly developed processing solution that is the key to unlocking the value of its JORC resource.

In today’s announcement, AKN also mentioned that the remaining 7 assays from the in-fill drilling program were expected to be received within the next week and that metallurgical test work would begin immediately.

AKN expects the metallurgical test work to take 6-8 weeks to complete and the results from stage 1 to be reported before the end of the March quarter.

We think a much bigger re-rate for AKN could come when the processing issues around the shallow resource at the Onedin deposit are resolved.

You can check out our 2022 Investment memo by clicking the image below, and you can also check out our launch article for AKN where we do a deep dive into the 8 key reasons we invested in AKN. 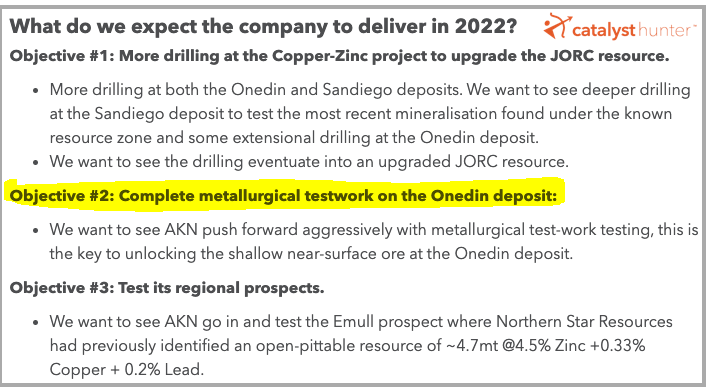 In its most recent quarterly report, AKN announced that it had recently completed a 7 hole Diamond drilling program at the Onedin copper deposit (the shallow near surface part of the existing JORC resource).

These additional 7 holes came after all of the RC/diamond drilling that AKN did earlier (which we have already received all of the assays from).

In the announcement, they mentioned that all of these were “Metallurgical drill holes” meaning the aim of the drilling program was not to make a new discovery or to extend the known deposit.

Instead, the aim of the drilling program would be to get clean core samples to use in the upcoming all important metallurgical test work program.

When drilling for metallurgical core samples, you need to drill straight into the guts of the ore body and that's exactly what AKN did to get that monster intercept announced today.

AKN used diamond drilling to get as clean a drill core as possible so that the processing test work can be done on logs that are the most representative of the Onedin deposits complex oxide mineralisation.

Check out our educational article explaining what is the difference between different types of drilling and why AKN decided to go with diamond rigs for this specific program.

In the image below we can see today’s intercept (AORD004) surrounded by the historical drill results and the last round of drilling done by AKN.

The faintly highlighted lines with the shaded red sections give a good indication of where the majority of the Onedin JORC resource is. 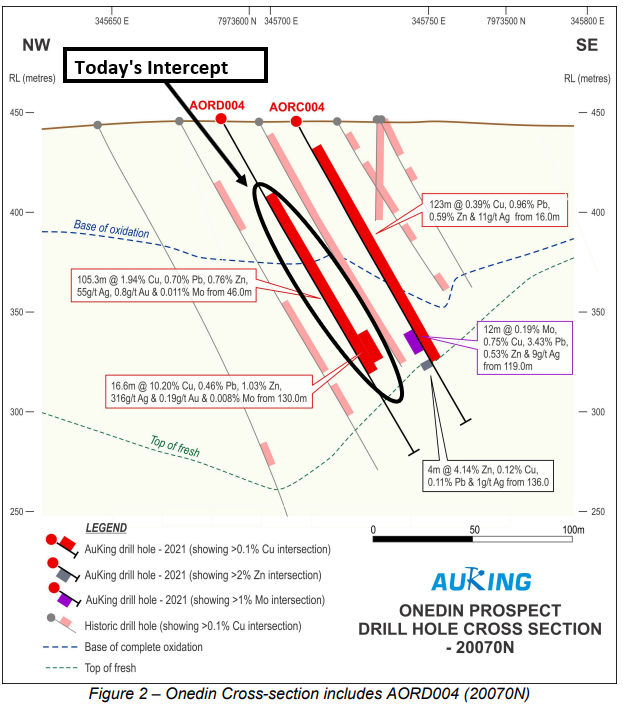 This sort of 100m+ intercept would normally be the start to a company making a discovery for any junior copper explorer had the drilling been in an area where we didn’t already know there was copper.

But for AKN, there was still a small surprise at the very end of the hole with a high-grade section of the intercept measuring 16.6m @ 10.20% copper from 130m. 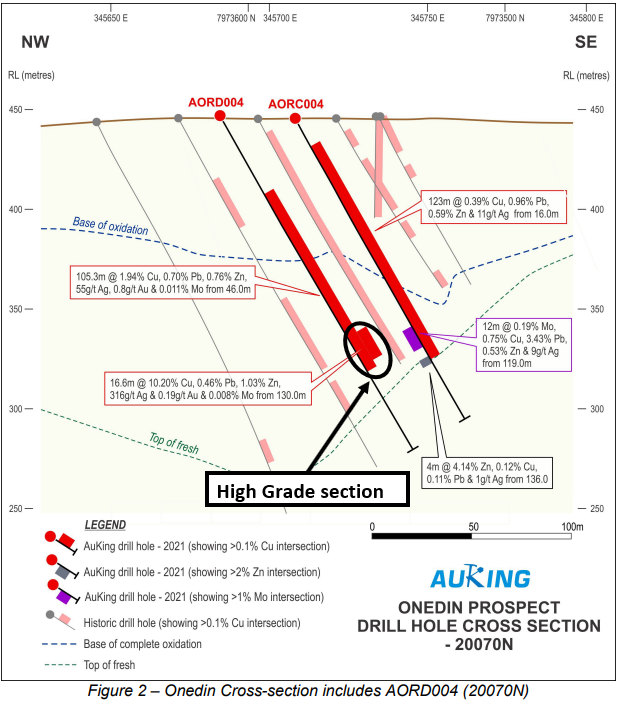 Having known that the drilling program would return massive copper intercepts we weren't expecting many surprises from the metallurgical drilling AKN was doing.

The surprise came from this high grade section of the intercept right near the bottom of the hole. An indication that there may be more copper at depth and high-grade copper at that.

As we highlighted in our first note on AKN, the issue with the Onedin deposit is the oxide host rock for the resource, without a suitable processing solution it just can't be economically extracted.

So at this stage, we are less focused on how much copper might be at depth and more about the metallurgical test work that will be done with the intercept announced today and the results of the remaining 6 assays that are pending.

Again in the image below, we can see that the area AKN finished drilling has been peppered with drilling in the past (grey, purple and blue lines). The red lines in the image below show the location of the drilling from which the remaining 6 assays are due. 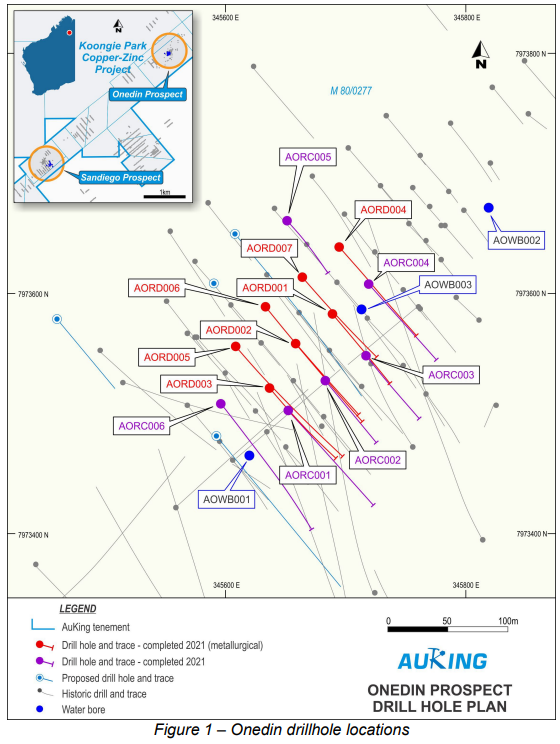 What's Next for AKN?

Today’s results are the first of a 7 hole diamond drilling program. AKN has said it expects the results from the next 6 assays within the next week or two so we will be watching to see if similar intercepts come up in these.

We expect the intercepts to be strong given the drilling program was straight into where the known orebody is.

As soon as the assays come in we expect the drill cores to be sent over to the testing labs so that metallurgical testing can begin.

AKN is saying from start to finish the metallurgical test work would take 6-8 weeks which means before the end of the financial year we should start to see if a breakthrough can be made.

AKN in today's announcement also highlighted that a resource update had been commissioned.

Generally when a company does infill (Metallurgical) drilling the resource figure is unlikely to be upgraded significantly. It usually means that resources from the Inferred category get moved into indicated or measured status. Check out our e-book for more on this.

For this resource update, we expect only a modest increase after the intercepts made at the San Diego deposit, we will be looking at the increase in classification more here.

AKN Investment Memo and what we want to see in 2022:

From our investment memo, you can see that AKN has already set the wheels in motion to achieve two of the three key objectives that we wanted to see AKN achieve in 2022. 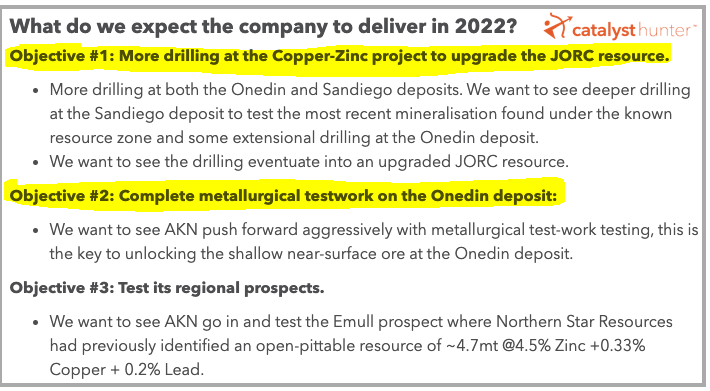 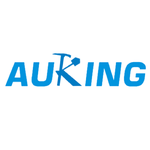 Can this Tanzanian Exploration Maverick Lead AKN to Uranium Success?

WA Copper Stock - AKN - What we are looking to see next

Shallow Copper Resource - waiting to be de-risked through “met work”