Elysium Resources Limited (ASX:EYM) has struck gold, in the form of six nuggets at the Bellary Project, 30 kilometres north-west of Paraburdoo.

The discovery comes just a month after the small-cap explorer entered the new Pilbara Gold Rush with the announcement of its acquisition of prospective Pilbara gold assets from Hardey Resources.

Any gold explorer in the Pilbara knows that the potential there is enormous, but so too is the sheer size of the region. Which is why it’s so important that a small play like the $10.7 million-capped EYM targets their exploration efforts strategically.

EYM is an early stage play in the region so investors should keep an eye on their strategy and seek professional financial advice if considering this stock for their portfolio.

EYM has already made a string of smart decisions to set themselves up for success.

Just weeks after entering the region, EYM has already discovered gold nuggets from exploration at the Bellary Project.

The Hardey Formation has been mapped extensively throughout the Bellary Project by the Geological Survey of WA. These findings have led to the widespread belief that Hardey is the region’s best target.

Within the project, 46 sites of interest had been previously identified by Hardey Resources’ geologists. All are located within the target stratigraphy of the Fortescue Group Rocks and many are supported by historic geochemistry gold anomalism.

Now it seems the value of the Bellary Project is about to be unlocked by EYM.

This finding is a major milestone for any gold explorer. Yet for a gold explorer who just weeks ago jumped into the Pilbara Gold Rush, that amounts to big news.

The six gold nuggets at the Bellary Project were found via metal detection. The detection process identified a gold-bearing alluvial horizon which may be shedding from the observed outcropping Hardey Basalt Conglomerate within close proximity.

The below map indicates the location of Bellary in relation to the broader Bellary Formation, Mt Roe Basalt formation and EYM’s overall landholding: 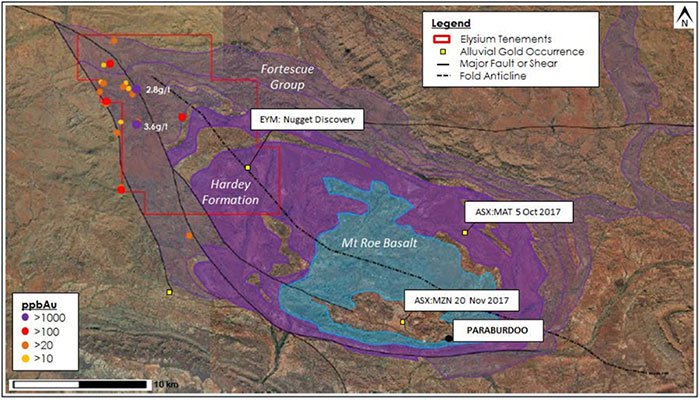 The trend of the discovered nuggets suggests the source of the gold could be the auriferous gold-bearing basalt conglomerate...

That means that there’s a good chance EYM is looking in the perfect place at the perfect time.

In the image below, you can see the relative distance between the location of the gold nugget trend and individual nuggets, in relation to the Hardey Formation Conglomerate (in the background): 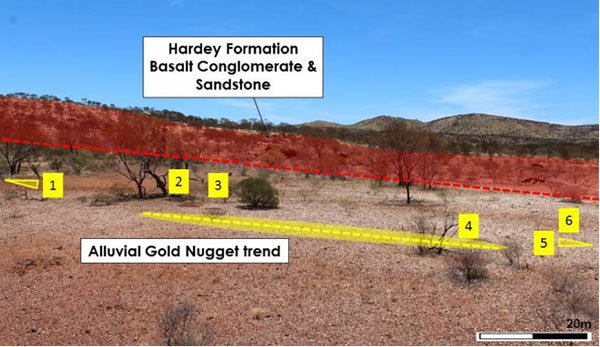 In the photo below, you can clearly see the size of the gold nuggets (with a $2 coin for reference): 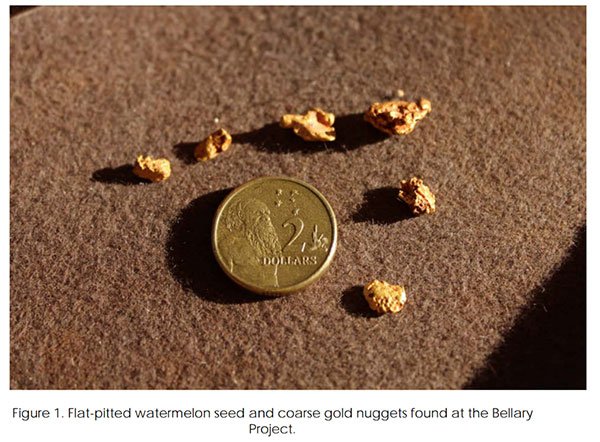 On top of the discovery of the nuggets, there’s more good news. Three outcropping parallel quartz veins have been mapped within close proximity to where the nuggets were found.

Rock chip sampling at the site has returned results of 3.89% copper and 0.9g/t gold. The combination of nearby basalt conglomerate units, alongside considerable quartz veining, could be a very promising sign for EYM’s new project.

These factors suggest that the Bellary Project contains Witwatersrand paleo-placer style mineralisation, as well as higher grade orogenic mineralisation styles... in a similar style to the A$3.5 billion-capped Northern Star’s (ASX:NST) ‘Paulsens mine’ in the Pilbara.

And remember, this is all from Phase 1 of the field programme. EYM is just getting started.

EYM expects to announce full results from the programme in coming weeks.

For EYM’s new peers — small-caps who are already well into their exploration forays in the Pilbara region — the last six months has been a bit of a ‘golden era’, one might say.

Each has risen by at least 300% and EYM has been taking note.

Have a look at what each of one of EYM’s peers’ share price has done on the back of EYM hitting a peak of a 162% gain in the last month:

Whilst EYM has come back a little, the flurry of activity and discovery augers well as it looks to emulate its peers in the region.

This latest news could see investors jumping in and see its share price take off again.

A bit of background on Hardey Resources

Hardey Resources was a first mover in the burgeoning Pilbara gold rush, having picked up tenements in November 2016, before the the billion dollar capped Novo Resources (TSX-V:NVO) and Artemis (ASX:ARV) JV discovery prompted ‘gold rush’ cries in the region.

Since then, De Grey Mining (ASX:DEG) has given a further shot in the arm to the western gold rush when it identified a new conglomerate target in late September, including 91 gold nuggets found at surface.

Hardey managed to complete a fair bit of exploratory work between then and EYM’s acquisition in October. This offered a nice leg-up for EYM in getting the projects to more advanced stages... and hopefully launching a trajectory in line with ARV, DEG, Kairos Minerals (ASX:KAI), DGO Gold (ASX:DGO) and more.

All in all, the projects acquired by EYM from Hardey were: Bellary, Hamersley, Cheela and Elsie North, which altogether covers 512 square kilometres of Fortescue Group Rocks. In addition, the agreement included the Grace Project in WA’s Paterson Province.

However, the projects of most current interest to EYM are Bellary and Hamersley, both of which are prospective for conglomerate-hosted gold and high-grade orogenic gold.

Of course EYM remains a speculative stock and investors should seek professional financial advice if considering this stock for their portfolio.

The main aim of the game for EYM is to identify the conglomerate-hosted gold potential at these projects... and it’s got off to an excellent start.

With EYM having now completed phase 1 and 2 of its drilling plans at its Lloyds Copper Mine extension, and with exploration continuing on its copper-lead-zinc polymetallic target in the world-class Lachlan Fold Belt, the company has several irons in the fire.

In the near-term, it also plans to drill at its highly prospective Hackney’s Creek and Isabella gold prospects.

However, it is this recent gold discovery which has raised most interest and there could be further discoveries as EYM completes its Phase 1 exploration program.

We can’t say what news will come out from EYM in future, but it seems there are very likely to be more catalysts afoot for this busy gold explorer.