Catalyst Hunter invests in companies and shares updates, and commentary on their business execution and progress.

What does LYN do?

What is the macro theme?

Niobium and rare earths exploration in the newly opened West Arunta region in WA. WA1 Resources recently made a discovery here, which saw it run from 13c to over $2.

Why did we invest in LYN?

LYN holds a GRANTED Exploration licence in an emerging rare earths/critical minerals region. This means LYN can start firming up a drilling program over the project area immediately. LYN’s project is ~94km north of WA1 Resources and Encounter Resources.

In 1982, BHP ran a six hole drilling program on LYN’s ground and intersected “intrusives and strong carbonate alteration” that may be prospective for rare earth carbonatite mineralisation. BHP’s intercepts came from only 6m below the surface. BHP at the time were attempting to drill for diamonds.

LYN has only ~34.5 million shares on issue, with ~4 million in escrow until November 2023. If a new discovery is made, the supply of shares available to buy could be relatively low, which may increase the strength of a re-rate in the company’s share price, should it materialise.

LYN has a current market cap of $18M, with $3.3M in cash at Sept 30, 2022, and an enterprise value of $14.7M. If a successful discovery is made, the share price should re-rate significantly. For example a ~$70M market cap on the back of a discovery would see LYN trading at around $2.

What do we expect LYN to deliver?

We want to see LYN complete target generation work to refine its existing data further. This work will help improve the company’s understanding of its project and help design a drilling program.

Objective #2: Drilling at its niobium & rare earths project in WA.

We want to see LYN get on the ground and drill its project in the West Arunta region.

Objective #3: Target generation and then drilling at its Nickel/Copper/PGE projects

We want to see LYN complete target generation work across its other projects to identify the highest-priority drill targets. We want to see at least one of these projects get drill tested in 2023.

What could go wrong?

LYN is yet to make an economic discovery, with all of its projects considered early stage prospects. Inherently there is a risk that future drilling programs return nothing and LYN’s projects are considered stranded. There is plenty of time before drilling starts in 2023 - so there could be periods of share price weakness prior to drilling.

The West Arunta province is hot right now after WA1’s discovery and incredible share price run, but it could cool off before LYN drills its West Arunta prospect in the second half of 2023.

We have observed that Nearology plays rarely succeed - as we have seen over the years with failed investments in the Fraser Range Nickel rush, the Julimar Province PGE rush and the Earaheedy Basin lead-zinc rush. Whilst LYN’s current key project sits near existing discoveries and is prospective, the chances of the company actually making a discovery are low.

LYN is an early stage exploration company chasing new discoveries. There is always a risk that a market wide sell off will hurt LYN’s share price the most, given investors will look to withdraw capital from the higher risk investments in their portfolios first.

What is our investment plan?

There are still at least three months before any drilling will take place (from the time of publishing this memo) - leaving plenty of time for a “pre-drill result speculation” price rise to creep in and probably also a few quiet periods where the share price may drift down.

The key goal is to hold a material position for discovery, but if the share price is trading at over $1.20 in March/April next year, we will consider selling around 15% of the position to de-risk, claiming some capital back for tax, operational costs and new investments elsewhere which is our general model.

Disclosure: S3 Consortium Pty Ltd (the Company) and Associated Entities own 2,631,250 LYN shares and 300,000 LYN options at the time of publishing this memo. The Company has been engaged by LYN to share our commentary on the progress of our Investment in LYN over time.

Our Past Commentary on Lycaon Resources Ltd

2023 is shaping up to be a big year for the West Arunta province in WA.

We recently Initiated Coverage on Lycaon Resources (ASX: LYN) which holds ground ~94km north of WA1 Resources which recently re-rated by ~2,300%+ after making a niobium and rare earths discovery.

LYN’s ground also sits north of Encounter Resources, which just yesterday announced that it has gravity anomalies similar to WA1.

Encounter announced a ~600m diameter gravity anomaly, which is similar to WA1 Resources’ whose grounds are prospective for IOCG style copper and carbonatite-hosted REE mineralisation.

Similarly LYN has an almost identical anomaly measuring ~700m long and is also preparing to drill its project in 2023.

At the moment the three companies have vastly different market caps:

We are Invested in LYN to see it drill its project and hopefully make a discovery similar to WA1 Resources leading to a similar 1,000%+ re-rate in the company’s share price. 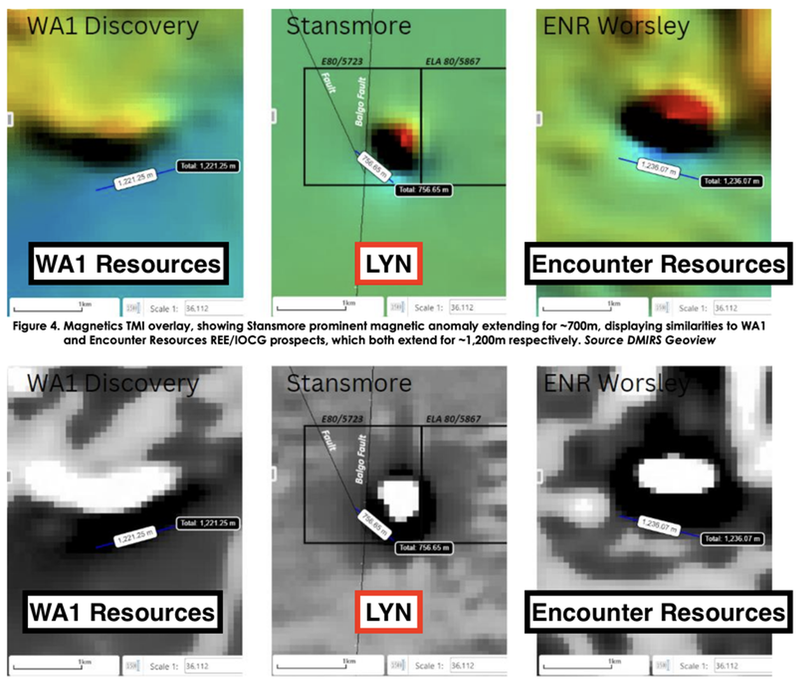 LYN will be following an almost identical exploration process to its larger capped neighbours: